The Taycan isn’t exactly a ground-breaking electric car, but with a starting price of $150,000, it seems likely to be a profitable one 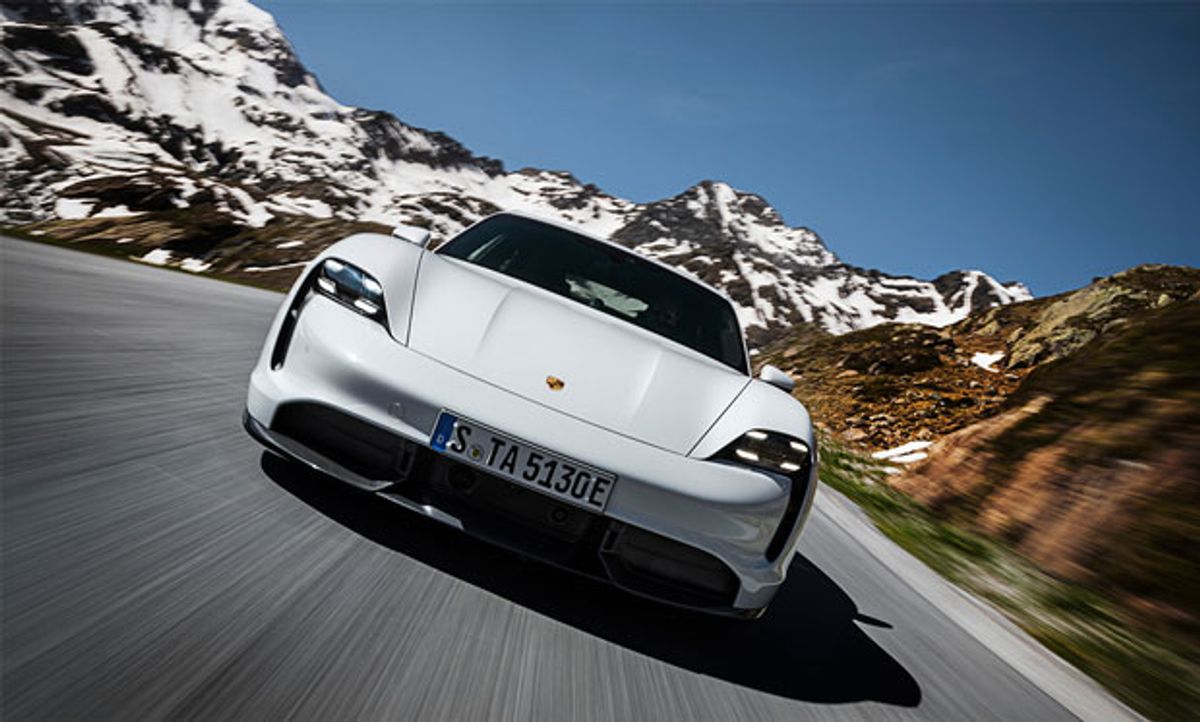 If you’re going to launch a pricey and glamorous new car, you need a good backdrop. If it’s an electric car, you could do worse than associate it with clean, renewable electricity. Which is how I found myself staring at the newly unveiled 2020 Porsche Taycan on a specially built temporary stage whose back wall dropped away to reveal the stunning panorama of the American Falls in Niagara Falls, Ontario.

The Taycan (“TIE-con”) is Porsche’s first electric car, unveiled Wednesday in three simultaneous events in North America, Europe (at a photovoltaic solar power site in Berlin), and China (a wind farm in Fuzhou). It is the long-awaited production version of the all-electric Mission E concept shown four years ago at the Frankfurt Motor Show.

The new electric car is fast, sleek, and very, very expensive. Starting at more than $150,000 in the U.S., the two versions Porsche launched first—called Turbo and Turbo S, despite having no turbos—are priced well above the cost of any current Tesla. Other versions will follow, including a “base” Porsche Taycan that may have a battery pack smaller than the 93-kilowatt-hour capacity of the Turbo models.

Like virtually every other long-range electric car, the Taycan uses a low, flat battery pack under the cabin floor. It stretches from axle to axle for the full width of the car, though the pack contains depressions for the feet of two rear seat passengers. In what may be a literal translation from the German, Porsche calls them “foot garages.”

As described in Porsche Claims It Can Double Tesla’s Fast-Charging Rate, the German maker’s innovation for the Taycan battery was to wire pairs of LG Chem lithium-ion pouch cells in series, allowing the pack to discharge and charge at 800 volts. This permits DC fast charging at up to 270 kilowatts at launch, and in future perhaps as high as 400 or 500 kW.

Stations that can charge at up to 350 kW are now open or under construction from US charging network Electrify America, and both EVgo and ChargePoint have said they plan to follow suit. In Europe, the Ionity network is doing the same.

But a pioneering voltage demands new engineering, and most vehicles use carryover components from the huge supply base that provides electrical equipment like LED headlights and ambient cabin lighting. That’s why parts of the Taycan use four different voltages: 800 V for the main battery pack and traction motors; 400 V for certain other drivetrain electronics; 48 V for the optional Porsche Dynamic Chassis Control (PDCC) system adapted from that of the Panamera; and 12 V for dozens of conventional electric ancillaries.

All four wheels of the Taycan are powered, using a motor for each pair. The rear motor drives the wheels through a two-speed gearbox that uses a lower ratio for faster acceleration, and a higher gear for more energy-efficient high-speed cruising.

The faster Turbo S differs from the Turbo in several ways. For one, the inverter through which current flows to its front motor is rated at 600 amps rather than the 300 amps of the Turbo. For another, it has a “Launch Control” function that provides even faster acceleration by using an “overboost” function that draws additional power from the battery for 2.5 sections from a standing start.

The rear motor is rated at 335 kW and 550 Nm of torque, and the temporary “overboost” in Launch Control mode increases that to 610 Nm. The front motor of the Turbo model is limited to 175 kW by its inverter, while the Turbo S front motor produces 190 kW and 400 Nm, rising temporarily to 440 Nm in overboost mode.

The results are remarkable: acceleration from 0 to 60 mph in 3.0 seconds for the Turbo, and 2.6 seconds for the Turbo S. The latter is incrementally slower than the top-spec Tesla Model S (at 2.4 seconds) when operating in “Ludicrous” mode, but Porsche highlights a major difference between the two (without ever mentioning the Silicon Valley electric-car startup): Porsche can deliver that acceleration multiple times in a row without its control software dialing down performance as the battery and motors heat up. Tesla cannot say the same.

To cover the Taycan’s full suite of technologies would require thousands of words, many of them already published in the hundreds of articles that went live as a pair of embargoes expired on Wednesday.

But the most interesting thing about Taycan to someone who’s covered battery-electric vehicles for many years is how far Porsche has gone to ignore the fact it’s electric. Aside from blue-tinted transparent plastic letters spelling out “P O R S C H E” at the tail (blue is becoming the global auto industry’s symbol of electrification used by BMW, Hyundia-Kia and others), there’s zero visual indication the car has a battery rather than a fuel tank.

Its design could easily be that of the next Panamera large sedan: a lower, wider, sleeker version of a known sport sedan shape. The Turbo and Turbo S model nomenclature follows Porsche tradition. And the pricing cheerfully ignores whatever any theoretical competitors (Tesla, cough) may do this month or this week. We suspect, in fact, that Porsche has priced the Taycan to break even or even deliver a profit on each unit sold.

That stands in bold contrast to mass-market EV makers, who these days claim to see profitability on long-range electric cars sometime in the middle of the current decade. It even contrasts with Tesla, which faces the challenge of making enough profit on its growing volume of Model 3s priced at USD 35,000 to 50,000 to cover the costs of expanding its future model lineup.

The Taycan had several unexpected aspects, among them requiring use of the brake pedal to produce regenerative braking (or as German executives invariably call it, recuperation). It’s impossible to get “one-pedal driving” on a Taycan, as you can on vehicles as diverse as the Nissan Leaf and Tesla Model 3.

Again, it stems from Porsche’s desire to keep the Taycan fully aligned with the rest of its product line, using names and controls that will be familiar and reassuring to its current buyers.

The unexpectedly high pricing of the first two Taycan models led Tesla’s most partisan fans to jeer at the new entry as irrelevant, uninteresting, and clearly no threat to the Silicon Valley company working to become a mass automaker. Scores of sloppy “Porsche vs Tesla” articles only reinforced that comparison.

In the end, the Taycan is a first step from a very profitable carmaker. Note that Porsche provides almost half of VW Group’s overall profit while selling just 3 percent of its global volume of 10 million vehicles a year. And it won’t be the last. As well as more Taycan variants, there will be a Taycan Cross Turismo wagon, and an Audi e-tron GT that’s spun off the same underpinnings. Porsche has already said the next Macan small utility vehicle will be fully electric. If it makes money on that vehicle too, it will enter the ranks of the world’s important electric brands.

Disclosure: Porsche paid for airfare, lodging, and meals to enable IEEE Spectrum to bring you this first-person report.