10 Exciting Engineering Milestones to Look for in 2021 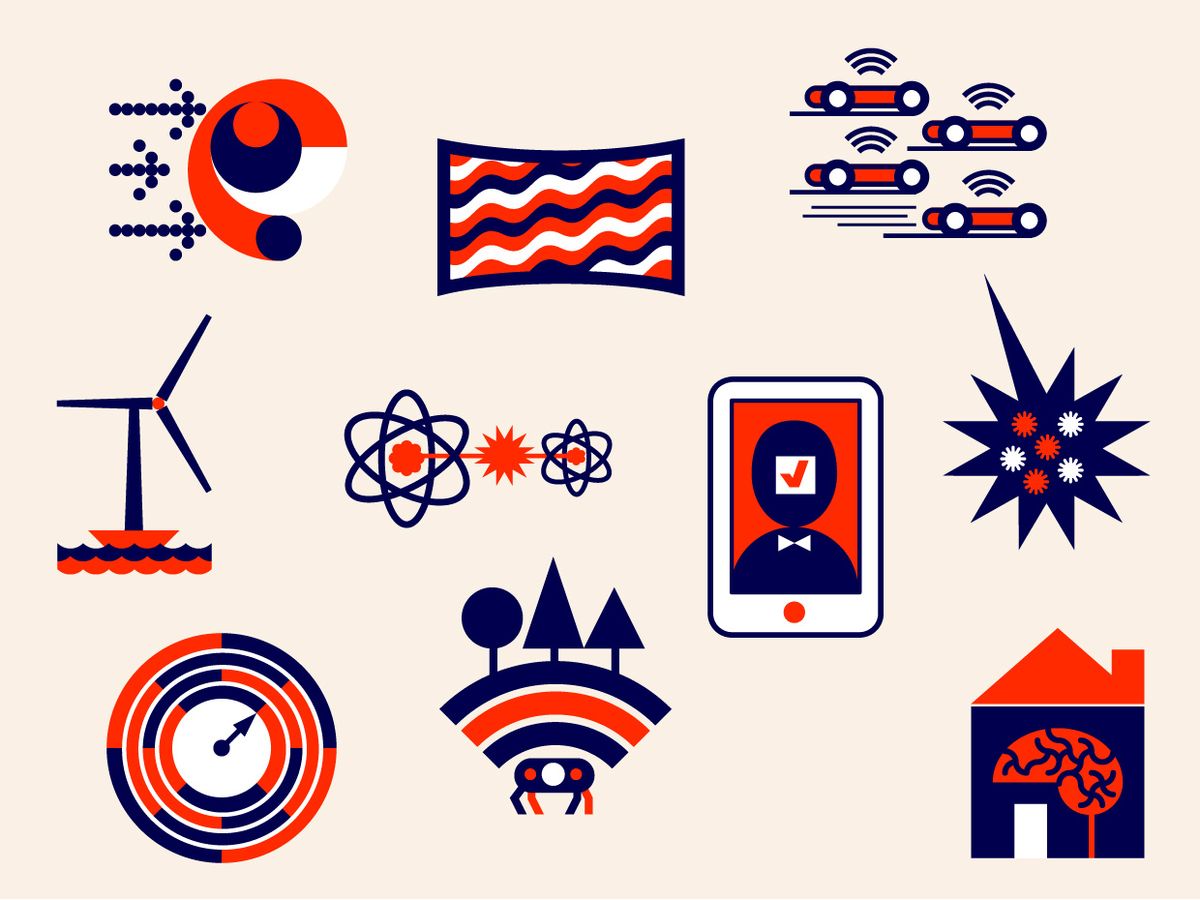 Last year, germicidal ultraviolet light found a place in the arsenal of weapons used to fight the coronavirus, with upper-air fixtures placed near hospital-room ceilings and sterilization boxes used to clean personal protective equipment. But a broader rollout was prevented by the dangers posed by UV-C light, which damages the genetic material of viruses and humans alike. Now, the Tokyo-based lighting company Ushio thinks it has the answer: lamps that produce 222-nanometer wavelengths that still kill microbes but don't penetrate human eyes or skin. Ushio's Care222 lamp modules went into mass production at the end of 2020, and in 2021 they'll be integrated into products from other companies—such as Acuity Brands' lighting fixtures for offices, classrooms, stores, and other occupied spaces.

Early this year, photons will speed between Stony Brook University and Brookhaven National Laboratory, both in New York, in an ambitious demonstration of quantum communication. This next-gen communication concept may eventually offer unprecedented security, as a trick of quantum mechanics will make it obvious if anyone has tapped into a transmission. In the demo, “quantum memory buffers" from the startup Qunnect will be placed at each location, and photons within those buffers will be entangled with each other over a snaking 70-kilometer network.

Developers of offshore wind power quickly find themselves in deep water off the coast of California; one prospective site near Humboldt Bay ranges from 500 to 1,100 meters deep. These conditions call for a new breed of floating wind turbine that's tethered to the seafloor with strong cables. Now, that technology has been demonstrated in pilot projects off the coasts of Scotland and Portugal, and wind power companies are eager to gain access to three proposed sites off the California coast. They're expecting the U.S. Bureau of Ocean Energy Management to begin the process of auctioning leases for at least some of those sites in 2021.

The Indianapolis Motor Speedway, the world's most famous auto racetrack, will host an unprecedented event in October: the first high-speed race of self-driving race cars. About 30 university teams from around the world have signed up to compete in the Indy Autonomous Challenge, in which souped-up race cars will reach speeds of up to 320 kilometers per hour (200 miles per hour). To win the US $1 million top prize, a team's autonomous Dallara speedster must be first to complete 20 laps in 25 minutes or less. The deep-learning systems that control the cars will be tested under conditions they've never experienced before; both sensors and navigation tools will have to cope with extreme speed, which leaves no margin for error.

The robots participating in DARPA's Subterranean Challenge have already been tested on three different courses; they've had to navigate underground tunnels, urban environments, and cave networks (although the caves portion was switched to an all-virtual course due to the pandemic). Late this year, SubT teams from across the world will put it all together at the final event, which will combine elements of all three subdomains into a single integrated challenge course. The robots will have to demonstrate their versatility and endurance in an obstacle-filled environment where communication with the world above ground is limited. DARPA expects pandemic conditions to improve enough in 2021 to make a physical competition possible.

In February, no fewer than three spacecraft are due to rendezvous with the Red Planet. It's not a coincidence—the orbits of Earth and Mars have brought the planets relatively close together this year, making the journey between them faster and cheaper. China's Tianwen-1 mission plans to deliver an orbiter and rover to search for water beneath the surface; the United Arab Emirates' Hope orbiter is intended to study the Martian climate; and a shell-like capsule will deposit NASA's Perseverance rover, which aims to seek signs of past life, while also testing out a small helicopter drone named Ingenuity. There's no guarantee that the spacecraft will reach their destinations safely, but millions of earthlings will be rooting for them.

By the end of the year, some Android phones may include a new feature that's intended to strike a blow against the ever-increasing problem of manipulated photos and videos. The anti-deepfake tech comes from a startup called Truepic, which is collaborating with Qualcomm on chips for smartphones that will enable phone cameras to capture “verified" images. The raw pixel data, the time stamp, and location data will all be sent over secure channels to isolated hardware processors, where they'll be put together with a cryptographic seal. Photos and videos produced this way will carry proof of their authenticity with them. “Fakes are never going to go away," says Sherif Hanna, Truepic's vice president of R&D. “Instead of trying to prove what's fake, we're trying to protect what's real."

In a world reshaped by the COVID-19 pandemic, in which most office work, conferences, and entertainment have gone virtual, cloud data centers are under more stress than ever before. To ensure that people have all the bandwidth they need whenever they need it, service providers are increasingly using networks of smaller data centers within metropolitan areas instead of the traditional massive data center on a single campus. This approach offers higher resilience and availability for end users, but it requires sending torrents of data between facilities. That need will be met in 2021 with new 400ZR fiber optics, which can send 400 gigabits per second over data center interconnects of between 80 and 100 kilometers. Verizon completed a trial run last September, and experts believe we'll see widespread deployment toward the end of this year.

While Samsung won't confirm it, consumer-electronics analysts say the South Korean tech giant will begin mass production of a new type of TV in late 2021. Samsung ended production of liquid crystal display (LCD) TVs in 2020, and has been investing heavily in organic light-emitting diode (OLED) display panels enhanced with quantum dot (QD) technology. OLED TVs include layers of organic compounds that emit light in response to an electric current, and they currently receive top marks for picture quality. In Samsung's QD-OLED approach, the TV will use OLEDs to create blue light, and a QD layer will convert some of that blue light into the red and green light needed to make images. This hybrid technology is expected to create displays that are brighter, higher contrast, and longer lasting than today's best models.

Truly high-quality data about brain activity is hard to come by; today, researchers and doctors typically rely either on big and expensive machines like MRI and CT scanners or on invasive implants. In early 2021, the startup Kernel is launching a wearable device called Kernel Flow that could change the game. The affordable low-power device uses a type of near-infrared spectroscopy to measure changes in blood flow within the brain. Within each headset, 52 lasers fire precise pulses, and reflected light is picked up by 312 detectors. Kernel will distribute its first batch of 50 devices to “select partners" in the first quarter of the year, but company founder Bryan Johnson hopes the portable technology will one day be ubiquitous. At a recent event, he described how consumers could eventually use Kernel Flow in their own homes.