Who’s Who in the Singularity

A guide to the singularity true believers, atheists, and agnostics 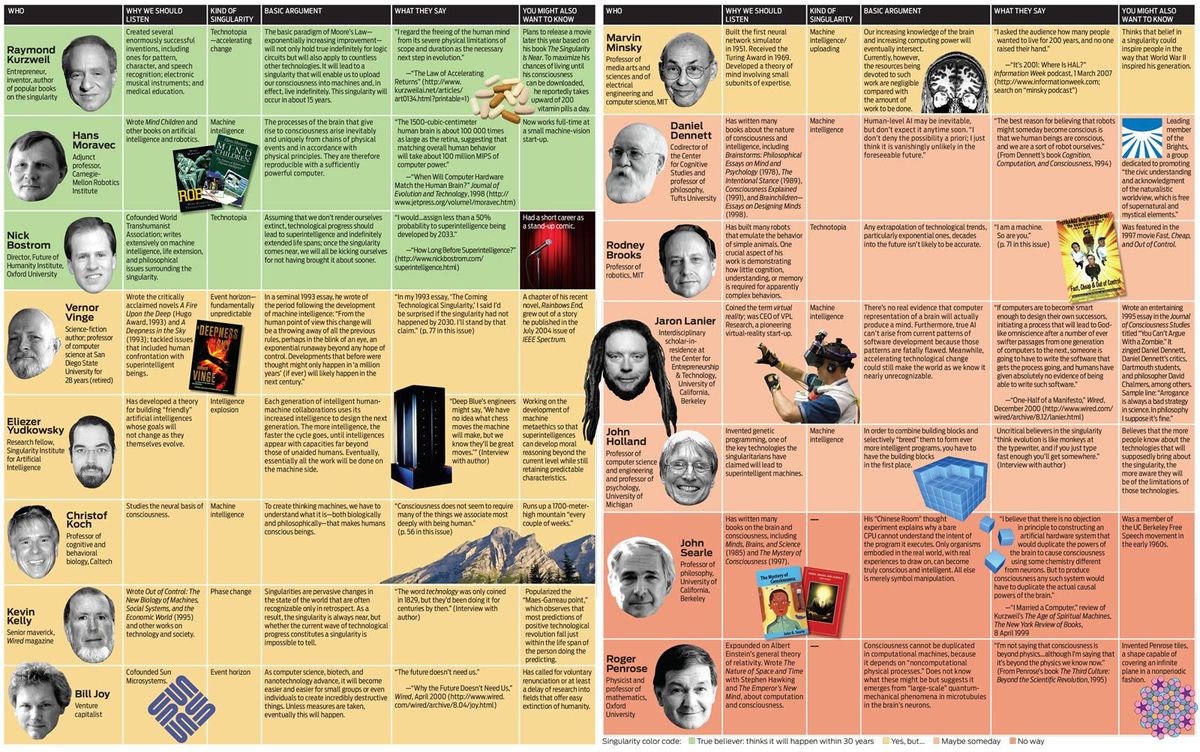 Who's Who in the Singularity

Computer scientist and science-fiction writer Vernor Vinge sketched out a seminal modern singularity hypothesis 15 years ago in his essay “The Coming Technological Singularity." Since then lots of other people have taken up the cause, so now you can either anticipate or scoff at many different kinds of singularities.

Perhaps the most inclusive variant is the one we label “technotopia," the scenario in which computers reach and exceed human levels of intelligence, essentially resulting in the resolution of all human problems, including illness and limited life span.

The “event horizon" idea corresponds most closely to Vinge's original: a confluence of technological changes, most likely including machine intelligence, beyond which we cannot see into the future to predict anything.

“Machine intelligence" represents the prediction that computers will achieve human-level intelligence and either consciousness or something indistinguishable from it.

“Uploading," which is also part of the technotopian vision, refers to the prediction that individual human brains (and most probably their state of consciousness) will be replicable in computerized form, leading to (among other things) virtual immortality. Kevin Kelly's “phase change" hypothesis likens the singularity to the changes between the solid and liquid or liquid and gaseous states of matter: the world becomes fundamentally different but in ways that may not be immediately perceptible to individuals immersed in it at the time.

The “intelligence explosion" hypothesis, initially developed by Turing associate I.J. Good, postulates that as machines (initially under the direction of humans) design the next generation of machines, eventually superintelligent levels will be reached. The effect is similar to the accelerating rate of technological change anticipated by technotopians, but the path for getting there is different.

Click here for a large version of this chart in PDF.