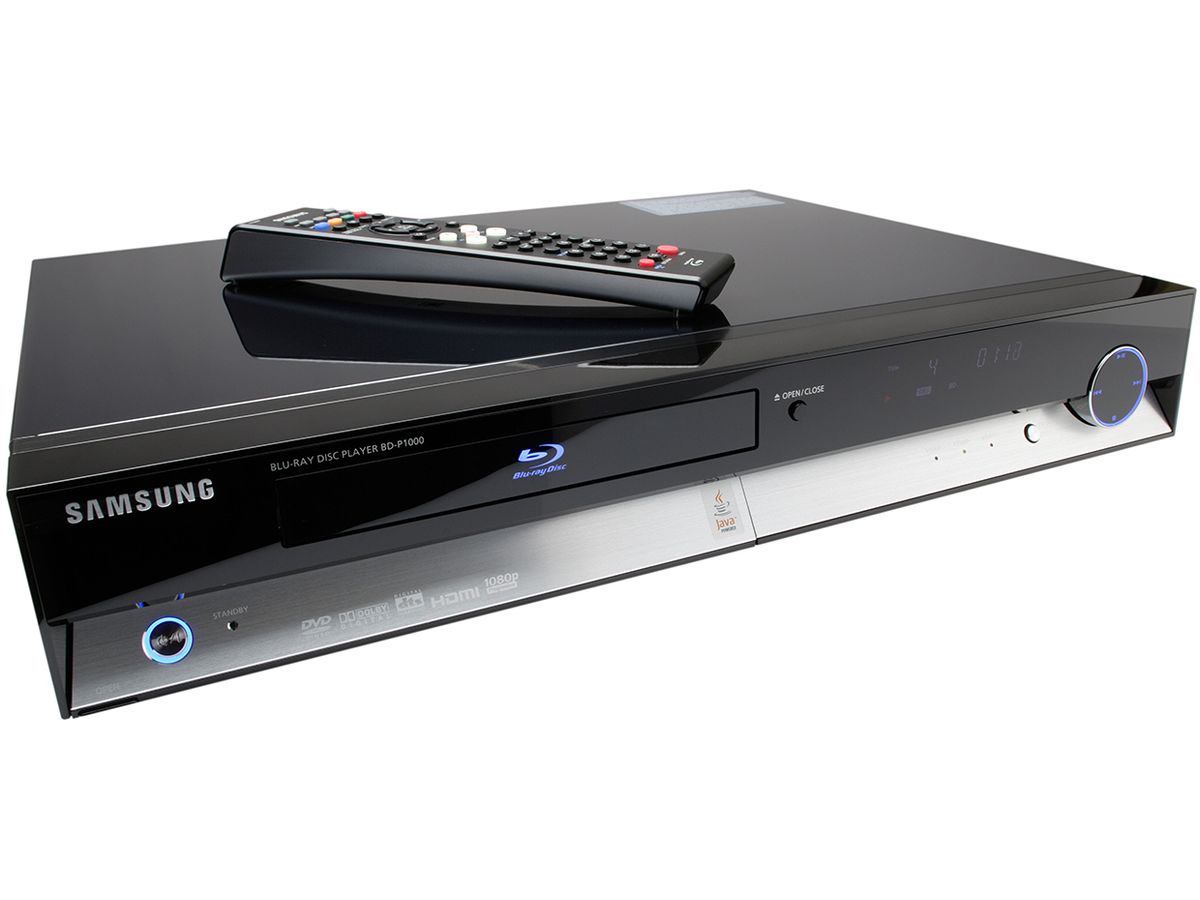 Good Enough: The Samsung BD-P1000 was nobody’s idea of a great disc player. But it played discs reliably and came out in June 2006—early enough to take on Toshiba and help head off a costly and protracted format war.
Photo: Hugh Threlfall/Alamy

The Samsung BD-P1000, which debuted in 2006, was one of the consumer electronics industry’s versions of a flag raised on a battlefield—it was a focal point for allies and potential allies to rally around.

Like any great battle, this one erupted as the result of a long period of maneuvering and, before that, simmering political tensions. To understand it, start with the first consumer optical storage medium, the compact disc, created for audio rather than video. CD players use red lasers with wavelengths of, typically, 780 nanometers (technically infrared) to detect physical pits (or the lack thereof) on the surface of the CD. That data is translated to digital 0s and 1s. A beam of laser light at a shorter wavelength would of course be able to read smaller pits, and the smaller the pit, the more of them could be packed into a given area. Use a blue laser and—voilà!—you can store far more data.

Keep that thought in mind as you contemplate the increasing resolution of digital video, which has been going on for years. Increasing resolution periodically creates the need for new technology to store greater amounts of data in a more compact format. By the turn of the century, the prevailing physical storage medium for digital video, the DVD, was at the limit of its storage capacity, which is 4.7 gigabytes for a single-layer disc. DVDs would not be adequate to store high-definition (HD) video, which the increasing number of owners of newly available HDTV television sets would soon be demanding.

By 2002, indium gallium nitride semiconductor lasers that emitted blue light (at 405 nm it was technically violet light) were just becoming available, and the industry began preparing to use them to read a new, more capacious optical disk format (yet to be devised) capable of storing HD video. That year, Samsung joined with the Massachusetts Institute of Technology (MIT), Sony, Panasonic, Pioneer, Philips, Thomson, LG Electronics, Hitachi, and Sharp to form the Blu-ray Disc Association to develop standards for blue-laser-readable disks and associated players.

Toshiba, meanwhile, was working on a different proposal it called High Definition Digital Versatile Disc (HD-DVD) that would eventually gain the backing of both Microsoft and Intel.

Blu-ray and HD-DVD were similar in many ways, but not compatible. As late as 2005 there were attempts to avoid a costly format war that would inevitably retard the market for both HD movies and playback systems. But both sides refused to give in.

Battle of the Discs: In 2007, the optical-disc format war was on between Blu-ray backers such as Sony (left photo) and HD-DVD supporters, including Toshiba (right). The war ended about a year later, when Toshiba surrendered. Photos: Yoshikazu Tsuno/AFP/Getty Images

In March of 2006, Toshiba was first to market with an HD-DVD player, a model released in Japan that sold for a little over US $900. The following month Toshiba entered the U.S. market with a pair of systems, one priced at $799 and the other at $499. Toward the end of the year, Microsoft introduced an HD-DVD player that worked in concert with its Xbox game console.

Sony had already produced prototype Blu-ray players, but in June 2006, it was Samsung that was first to bring a Blu-ray player to market (even then, Samsung had to push back the introduction from its originally scheduled debut in May). The BD-P1000 initially sold for $1,000, but Samsung soon cut the price to be more competitive with Toshiba.

The Samsung player received tepid reviews. It played Blu-ray discs reliably, but it had none of the niceties that would be taken for granted with Blu-ray players even a year later, such as multiple input jacks for external sources or support for 7.1-channel sound (the Blu-ray standard accommodated up to eight channels of audio).

On the plus side, the Samsung player was capable of upconverting DVDs, a feature added late in the development process that supposedly contributed to the brief delay in its introduction. Upconversion was a technique used with early, standard-definition DVDs to make them look better on the high definition TVs then starting to become available. Early DVDs, taking their cue from the cathode-ray TVs then still available, used a video scheme called interlacing. Basically, in an interlaced system, two complete horizontal scans are necessary to reveal an entire image on the screen; one scan puts up all the even numbered scan lines, and the next scan all the odd ones. But the fancy new HDTVs becoming available then were designed for progressive-scan video, in which the entire image is scanned over and over again on the screen to produce moving images. (Incidentally, the -i or -p suffix seen in HDTV resolution designations, such as 1080i or 1080p, refers to whether the measurement was made in an interlaced- or progressive-scan mode.)

In short, upconversion referred to the process of converting relatively low-resolution, interlaced video stored on a DVD to the higher-resolution, progressive-scan system adopted by HDTVs. It could make interlaced standard-definition video look better—not as good as native HD, but still much better than what it would otherwise have looked like. For the BD-P1000, Samsung sourced its upconversion technology from Faroudja Laboratories.

But forget all that stuff. Technological achievement was never really the purpose of the BD-P1000. The point was to have ready a Blu-ray system to go toe-to-toe with Toshiba and its HD-DVD allies so that they could not establish major market momentum. By that measure, the BD-P1000 was a triumph, helping to truncate yet another one of the electronics industry’s seemingly endless format wars.

The HD-DVD and Blu-ray advocates duked it out for nearly two years, but the cumulative marketing muscle of the Blu-ray partners eventually proved overwhelming. By 2007 Blu-ray discs were far outselling HD-DVDs. Along the way, motion picture studios, perpetually concerned about piracy, decided one after another that they preferred the way Blu-ray performed copy protection. They then began to deny HD-DVD disc makers the rights to reproduce their films. Movie rental companies (heading for doom but at the time still important participants in the movie ecosystem) subsequently announced they would no longer carry HD-DVDs. In 2008, Toshiba gave up and the reign of Blu-ray began.