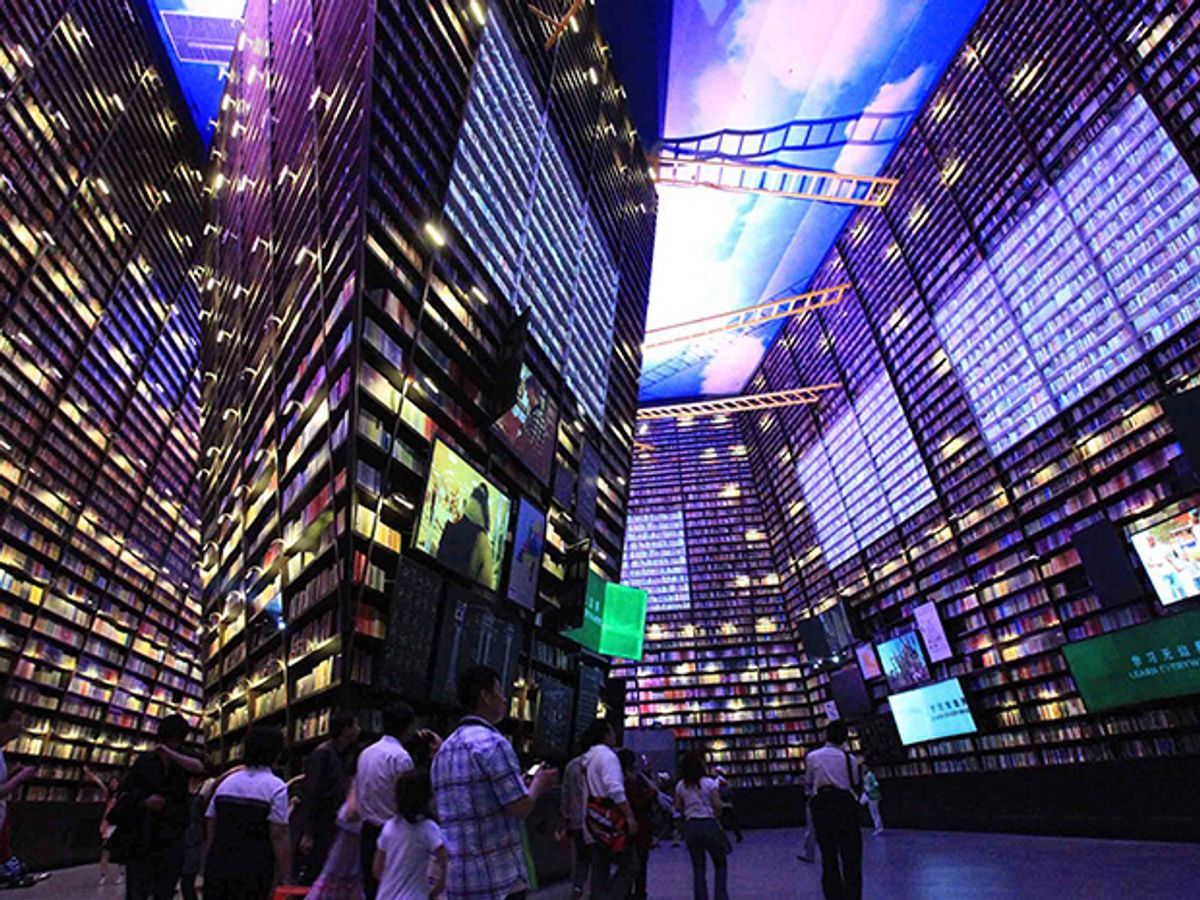 China: Times Square World In the Pavilion of Urban Planet (above), visitors walk through a vertiginous cautionary tale: The garishly lit city-planet, according to the pavilion’s designers, represents the ecological problems posed by unchecked development. In this and the other 270 national, corporate, and theme pavilions, the question hangs like a challenge: Can we create cities whose citizens enjoy a fulfilling existence without destroying the planet? Photo: Xinhua/Landov

At their finest, world’s fairs are astrange amalgam of the practical and the impossible, the feasible and the futuristic, the ridiculous and the sublime. Since the first official world’s fair in 1851, they have churned out giddy monuments to human industry and innovation, with the shining promise of technology taking center stage.

Many utopian dreams of world’s fairs past have now been absorbed into the everyday: the first commercial escalator at the 1900 world’s fair in Paris; the personal automobile in 1904; RCA’s television in 1939. The potential of such inventions seemed only for the good. Escalators and elevators would enable modern skyscrapers and cities. The car offered unfettered freedom of movement. The phone and TV would create an immediate connection to the outside world.

The downsides of modernity emerged later. All those skyscrapers in all those cities now soak up the electrical output of entire power plants. Hundreds of millions of cars have created a nightmare of traffic congestion and pollution. Lonely souls stare at their TV screens, cut off from real, human contact.

Although there’s plenty of starry-eyed techno-optimism on display at Expo 2010 Shanghai China (which opened in May and runs through October), many of the exhibits don’t share in the unbridled optimism that characterized expos of the 19th and 20th centuries. Rather than striding with abandon toward the technological marvels of the future, much of what’s on display deals with the repercussions of 150 years of production and consumption, of which pollution, stress, isolation, and climate change are only a few. Even the expo’s theme, “Better City, Better Life,” suggests that we need to rethink just how we’re living.

UNITED KINGDOM: SEEDS OF CHANGE Buildings of the future will need to use energy sparingly. The United Kingdom pavilion boasts what’s arguably the most stunning building on the fairground: the 20-meter-high Seed Cathedral. The structure was created out of 60 000 clear rods, each of which has a seed encased in its tip [see bottom]. During the day, the rods siphon daylight from outside to brighten the cathedral without artificial lighting. At night, efficient LEDs embedded in the rods make the structure glow.
Photos, From top: Imaginechina (2); Aly Song/Reuters
SAUDI ARABIA: ARABIAN LIGHTS Inside the US $164 million Saudi Arabia pavilion, a hallucinatory panorama of Muslim-themed lights and music flashes across an enormous Imax screen—said to be the world’s largest—and has visitors waiting up to 9 hours in line for a peek.
Photo: Xinhua/Landov
DENMARK: FOOT POWER Missing from this world’s fair? Cars. Except for a few environmentally friendly offerings like a solar-powered Nissan Leaf, the transportation on offer at the exhibition is largely of the two- or three-wheeled variety. The city of the future, according to the expo, is built not around the combustion engine but rather human-powered transport, otherwise known as the bicycle. Of course, to make that utopian vision a reality, you need bike lanes. Denmark’s white spiral pavilion highlights the infrastructure to make the shift from a car-centric culture to a bike- and pedestrian-friendly city.
Photo: Wang Song/Xinhua/Landov
JAPAN: CORPORATE LADDER The most dangerous jobs in the city of the future will be handled by robots. At least that’s the message of Japanese industrial equipment maker Muscle Corp., based in Osaka, which created three bubble-headed robots (the size of middle schoolers) that tirelessly scale the 20-meter-high scaffolding outside the Japanese Industry Pavilion. Aided by hook hands that fit onto the pipes of the scaffolding, they climb from 9 a.m. until midnight, with no breaks, as befits the robot workforce of the future.
Photo: Hu Zheng/Xinhua/Landov
SPAIN: SUPERPREDATOR The official party line on Miguelín, the Spanish pavilion’s animated, 6.5-meter-high baby, is that it should “remind visitors that what we do to the Earth today has consequences for the children who will be here long after we’re gone.” But it’s hard not to read a slightly more sinister message into a creature built by the special effects designers behind Alien vs. Predator. As the world becomes increasingly urbanized and cities evolve into megacities, planners will need to figure out how to prevent their metropolises from collapsing under the weight of their populations.
Photo: Kyodo/Landov
CHINA: ENDURING LEGACY Artifacts of past world’s fairs sometimes become national icons—think of the Eiffel Tower. China’s own bid for posterity at the Shanghai Expo is the Crown of the East, a $220 million, 63-meter-high inverted ziggurat painted bright red. Whether the edifice has staying power remains to be seen, but other expo-related outlays should leave Shanghai better off. In the run-up to the exhibition, the Chinese government reportedly spent $55 billion to build a new performance space and a new airport terminal and to revamp its subway system, among other things. To make way for the expo, though, it displaced 18 000 families from their homes, according to Amnesty International. Just as this world’s fair reflects an evolution in attitude from gee-whiz optimism to a more sober contemplation of what it means to be livable and eco-compatible, perhaps the next evolution should be to consider the implications of unchecked gentrification.
Photo: AFP/Getty Images

This article originally appeared in print as “After Utopia.”