Li-Cycle, Northvolt, and Ganfeng Lithium are among those building recycling plants, spurred by environmental and supply-chain concerns 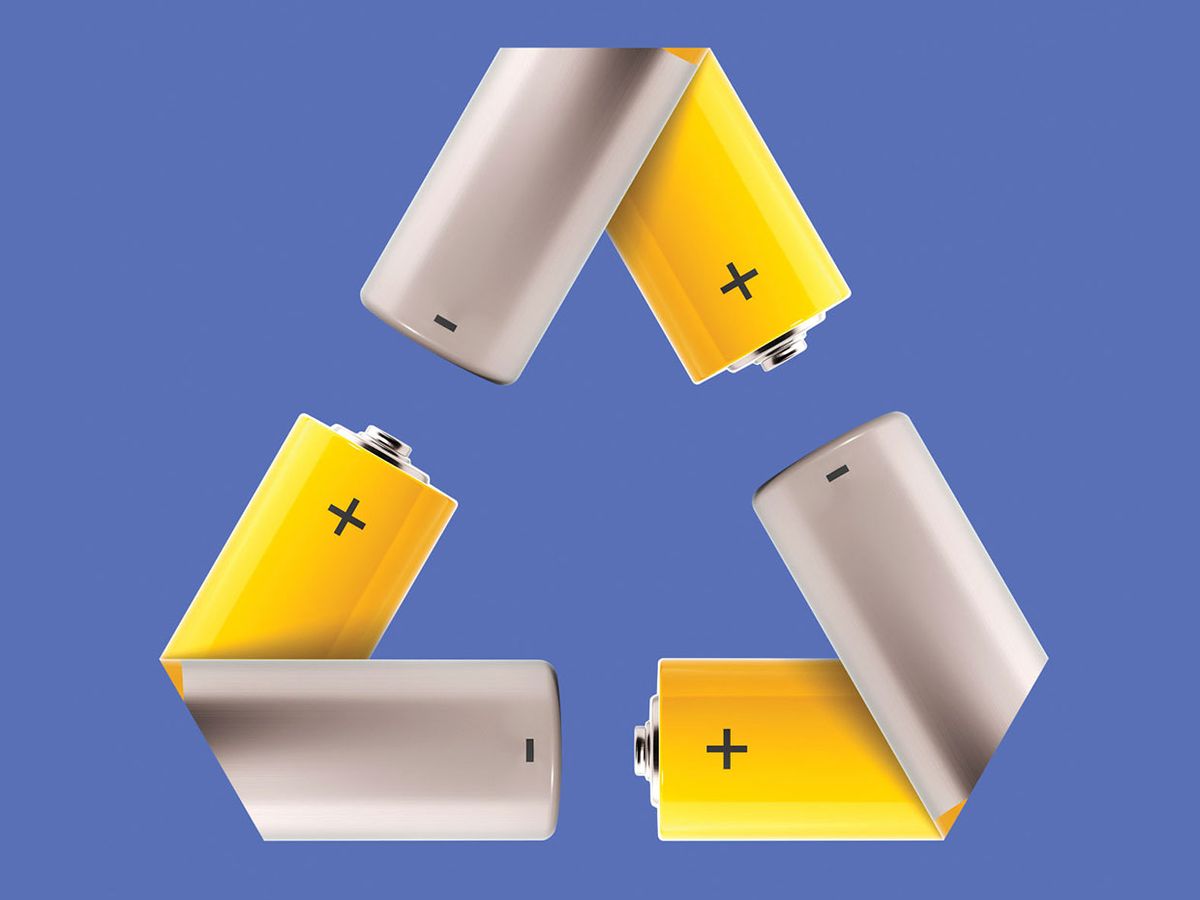 Later this year, the Canadian firm Li-Cycle will begin constructing a US $175 million plant in Rochester, N.Y., on the grounds of what used to be the Eastman Kodak complex. When completed, it will be the largest lithium-ion battery-recycling plant in North America.

The plant will have an eventual capacity of 25 metric kilotons of input material, recovering 95 percent or more of the cobalt, nickel, lithium, and other valuable elements through the company's zero-wastewater, zero-emissions process. “We'll be one of the largest domestic sources of nickel and lithium, as well as the only source of cobalt in the United States," says Ajay Kochhar, Li-Cycle's cofounder and CEO.

Founded in late 2016, the company is part of a booming industry focused on preventing tens of thousands of tons of lithium-ion batteries from entering landfills. Of the 180,000 metric tons of Li-ion batteries available for recycling worldwide in 2019, just a little over half were recycled. As lithium-ion battery production soars, so does interest in recycling.

According to London-based Circular Energy Storage, a consultancy that tracks the lithium-ion battery-recycling market, about a hundred companies worldwide recycle lithium-ion batteries or plan to do so soon. The industry is concentrated in China and South Korea, where the vast majority of the batteries are also made, but there are several dozen recycling startups in North America and Europe. In addition to Li-Cycle, that list includes Stockholm-based Northvolt, which is jointly building an EV-battery-recycling plant with Norway's Hydro, and Tesla alum J.B. Straubel's Redwood Materials, which has a broader scope of recycling electronic waste. [See sidebar, “14 Li-ion Battery-Recycling Projects to Watch."]

These startups aim to automate, streamline, and clean up what has been a labor-intensive, inefficient, and dirty process. Traditionally, battery recycling involves either burning them to recover some of the metals, or else grinding the batteries up and treating the resulting “black mass" with solvents.

Battery recycling doesn't just need to be cleaner—it also needs to be reliably profitable, says Jeff Spangenberger, director of the ReCell Center, a battery-recycling research collaboration supported by the U.S. Department of Energy. “Recycling batteries is better than if we mine new materials and throw the batteries away," Spangenberger says. “But recycling companies have trouble making profits. We need to make it cost effective, so that people have an incentive to bring their batteries back."

Li-Cycle will operate on a “spoke and hub" model, with the spokes handling the preliminary processing of old batteries and battery scrap, and the black mass feeding into a centrally located hub for final processing into battery-grade materials. The company's first spoke is near Toronto, where Li-Cycle is headquartered; a second spoke just opened in Rochester, where the future hub is slated to open in 2022.

Li-Cycle engineers iteratively improved on traditional hydrometallurgical recycling, Kochhar says. For instance, rather than dismantling an EV battery pack into cells and discharging them, they separate the pack into larger modules and process them without discharging.

When it comes to battery chemistries, Li-Cycle is agnostic. Mainstream nickel manganese cobalt oxide batteries are just as easily recycled as ones based on lithium iron phosphate. “There is no uniformity in the industry," Kochhar notes. “We don't know the exact chemistry of the batteries, and we don't need to know."

Just how many batteries will need to be recycled? In presentations, Kochhar refers to an “incoming tsunami" of spent lithium-ion batteries. With global sales of EVs expected to climb from 1.7 million in 2020 to 26 million in 2030, it's easy to imagine we'll soon be awash in spent batteries.

But lithium-ion batteries have long lives, says Hans Eric Melin, director of Circular Energy Storage. “Thirty percent of used EVs from the U.S. market are now in Russia, Ukraine, and Jordan, and the battery came along as a passenger on that journey," Melin says. EV batteries can also be repurposed as stationary storage. “There's still a lot of value in these [used] products," he says.

Melin estimates that the United States will have about 80 metric kilotons of Li-ion batteries to recycle in 2030, while Europe will have 132 metric kilotons. “Every [recycling] company is setting up a plant with thousands of tons of capacity, but you can't recycle more material than you have," he notes.

Materials that can be recovered from a lithium-ion battery include various metals and plastics. Photo: ReCell

ReCell's Spangenberger agrees that the need for increased battery-recycling capacity won't be pressing for a while. That's why his group's research is focused on longer-term projects, including direct cathode recycling. Traditional recycling breaks the cathode down into a metal salt, and reforming the salt back into cathodes is expensive. ReCell plans to demonstrate a cost-effective method for recycling cathode powders this year, but it will be another five years before those processes will be ready for high-volume application.

Even if the battery tsunami hasn't yet arrived, Kochhar says consumer electronics and EV manufacturers are interested in Li-Cycle's services now. “Often, they're pushing their suppliers to work with us, which has been great for us and really interesting to see," Kochhar says.

“The researchers involved in recycling are very passionate about what they do—it's a big technical challenge and they want to figure it out because it's the right thing to do," says Spangenberger. “But there's also money to be made, and that's the attraction."

American Battery Technology: As part of this company's focus on mining, extracting, and recycling lithium and other battery materials, it plans to open a battery-metals recycling plant in Incline Village, Nev., with an eventual capacity of 20,000 metric tons of scrap materials and end-of-life batteries per year.

Brunp Recycling Technology Co.: A subsidiary of the leading Li-ion battery maker CATL, Brunp is the largest recycler of those batteries in Asia (and therefore the world). Its new plant in China's Hunan province reportedly can recycle 100,000 metric tons of lithium-ion battery scrap per year.

Ganfeng Lithium: The Chinese Li-ion battery maker plans to build a battery-recycling plant in Mexico, to sell minerals to electric-vehicle makers and suppliers, including Tesla and South Korea's LG Chem.

Green Li-ion: The Singapore startup will open its second recycling plant in early 2021, which focuses on recycling Li-ion battery cathodes that are “99.9 percent pure."

Li-Cycle: Later this year, the Canadian firm will begin constructing a US $175 million recycling plant in Rochester, N.Y. When finished it will be North America's largest Li-ion–battery resource-recovery facility.

Northvolt: This Swedish battery startup, founded by former Tesla executives in 2016, already has an experimental recycling plant up and running and, with aluminum company Hydro, plans to open an 8,000-metric-ton-per-year recycling plant in Norway this year.

Primobius: This joint venture of Australia's Neometals and Germany's SMS Group will demonstrate Neometal's proprietary recycling method with plans to scale up commercially in Europe.

ReCell Center: Funded through a 3-year, $15 million grant from the U.S. Department of Energy's Vehicle Technologies Office, this research center is focused on longer-term methods such as direct cathode recycling.

Redwood Materials: Cofounded in 2017 by former Tesla CTO J.B. Straubel, the Carson, Nev., startup has positioned itself as a raw-materials supplier and will recycle electronic waste generally. It's among five initial recipients from Amazon's $2 billion Climate Pledge Fund.

ReLIB: Comparable to the U.S. ReCell Center, this R&D collaboration based at the Faraday Institution in Birmingham, England, is focused on improving the efficiency of EV battery recycling in the United Kingdom.

Tesla: For the past couple of years, Elon Musk has hinted that the EV maker will recycle its own batteries. Now it has reportedly begun doing so in China, where phase 2 of its Shanghai Gigafactory is wrapping up.

Umicore: A leading materials recycler with 11,000 employees worldwide, Umicore has since 2017 focused on “clean mobility," including the recycling of all components of electric vehicles. Its Hoboken, Belgium, plant can handle 7,000 metric tons of Li-ion batteries a year.

This article appears in the January 2021 print issue as “Momentum Builds for Lithium-Ion Battery Recycling."

Edd Gent is a freelance science and technology writer based in Bangalore, India. His writing focuses on emerging technologies across computing, engineering, energy and bioscience.

Jetpacks might sound fun, but learning how to control a pair of jet engines strapped to your back is no easy feat. Now a British startup wants to simplify things by developing a jetpack with an autopilot system that makes operating it more like controlling a high-end drone than learning how to fly.

Jetpacks made the leap from sci-fi to the real world as far back as the 1960s, but since then the they haven't found much use outside of gimmicky appearances in movies and halftime shows. In recent years though, the idea has received renewed interest. And its proponents are keen to show that the technology is no longer just for stuntmen and may even have practical applications.

Get the all details on schedule, scoring, and streaming

Evan Ackerman
Evan Ackerman is a senior editor at IEEE Spectrum. Since 2007, he has written over 6,000 articles on robotics and technology. He has a degree in Martian geology and is excellent at playing bagpipes.
5 min read
DARPA subt robotics

The preliminary rounds of the DARPA Subterranean Challenge Finals are kicking off today. It's been a little bit since the last DARPA SubT event—the Urban Circuit squeaked through right before the pandemic hit back in February of 2020, and the in-person Cave Circuit originally scheduled for later that year was canceled.

So if it's been a while since you've thought about SubT, this article will provide a very brief refresher, and we'll also go through different ways in which you can follow along with the action over the course of the week.