Gravity Energy Storage Will Show Its Potential in 2021 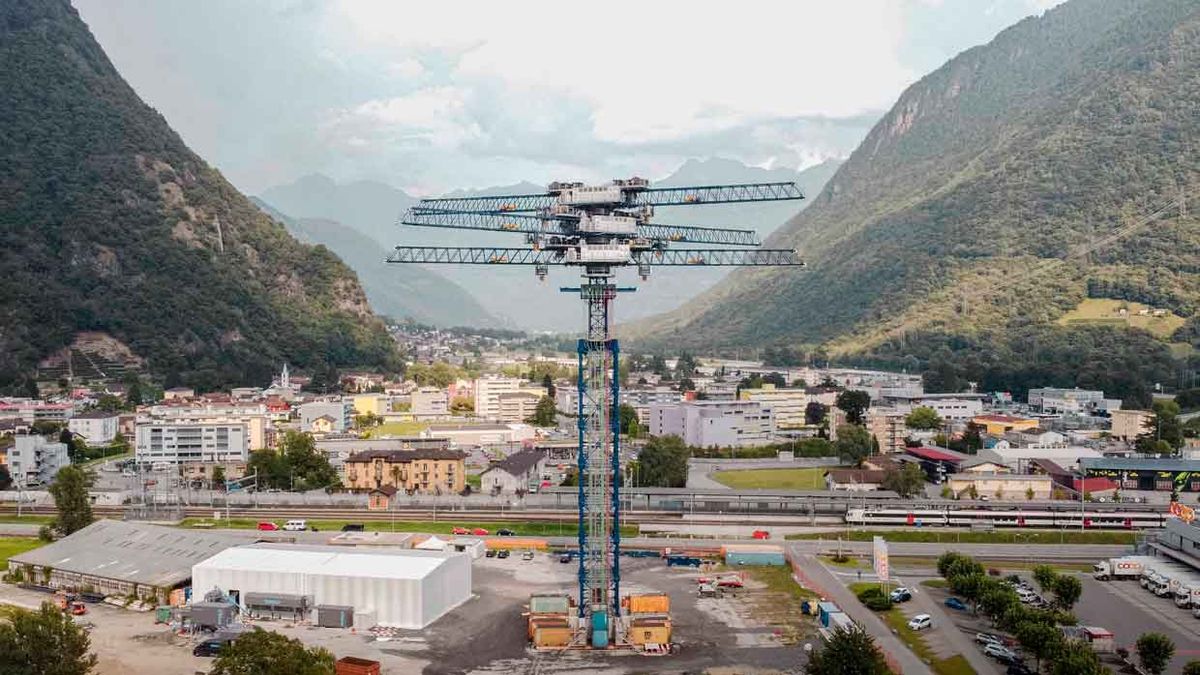 Cranes are a familiar fixture of practically any city skyline, but one in the Swiss City of Ticino, near the Italian border, would stand out anywhere: It has six arms. This 110-meter-high starfish of the skyline isn't intended for construction. It's meant to prove that renewable energy can be stored by hefting heavy loads and dispatched by releasing them.

Energy Vault, the Swiss company that built the structure, has already begun a test program that will lead to its first commercial deployments in 2021. At least one competitor, Gravitricity, in Scotland, is nearing the same point. And there are at least two companies with similar ideas, New Energy Let's Go and Gravity Power, that are searching for the funding to push forward.

To be sure, nearly all the world's currently operational energy-storage facilities, which can generate a total of 174 gigawatts, rely on gravity. Pumped hydro storage, where water is pumped to a higher elevation and then run back through a turbine to generate electricity, has long dominated the energy-storage landscape. But pumped hydro requires some very specific geography—two big reservoirs of water at elevations with a vertical separation that's large, but not too large. So building new sites is difficult.

Energy Vault, Gravity Power, and their competitors seek to use the same basic principle—lifting a mass and letting it drop—while making an energy-storage facility that can fit almost anywhere. At the same time they hope to best batteries—the new darling of renewable-energy storage—by offering lower long-term costs and fewer environmental issues.

Skyline Starfish: Energy Vault's concept demonstrator has been hooked to the grid in Ticino, Switzerland, since July 2020. By raising and lowering 35-metric-ton blocks (not shown) the tower stores and releases energy. Photo: Energy Vault

In action, Energy Vault's towers are constantly stacking and unstacking 35-metric-ton bricks arrayed in concentric rings. Bricks in an inner ring, for example, might be stacked up to store 35 megawatt-hours of energy. Then the system's six arms would systematically disassemble it, lowering the bricks to build an outer ring and discharging energy in the process.

This joule-storing Jenga game can be complicated. To maintain a constant output, one block needs to be accelerating while another is decelerating. “That's why we use six arms," explains Robert Piconi, the company's CEO and cofounder.

What's more, the control system has to compensate for gusts of wind, the deflection of the crane as it picks up and sets down bricks, the elongation of the cable, pendulum effects, and more, he says.

Piconi sees several advantages over batteries. Advantage No. 1 is environmental. Instead of chemically reactive and difficult-to-recycle lithium-ion batteries, Energy Vault's main expenditure is the bricks themselves, which can be made on-site using available dirt and waste material mixed with a new polymer from the Mexico-based cement giant Cemex.

Another advantage, according to Piconi, is the lower operating expense, which the company calculates to be about half that of a battery installation with equivalent storage capacity. Battery-storage facilities must continually replace cells as they degrade. But that's not the case for Energy Vault's infrastructure.

The startup is confident enough in its numbers to claim that 2021 will see the start of multiple commercial installations. Energy Vault raised US $110 million in 2019 to build the demonstration unit in Ticino and prepare for a “multicontinent build-out," says Piconi.

Energy Mine: Raising and lowering weights of hundreds of metric tons in a kilometer-deep abandoned mine shaft, as shown in this artist's rendering, could store and deliver energy quickly. Illustration: Gravitricity

Compared with Energy Vault's effort, Gravitricity's energy-storage scheme seems simple. Instead of a six-armed crane shuttling blocks, Gravitricity plans to pull one or just a few much heavier weights up and down abandoned, kilometer-deep mine shafts.

These great masses, each one between 500 and 5,000 metric tons, need only move at mere centimeters per second to produce megawatt-level outputs. Using a single weight lends itself to applications that need high power quickly and for a short duration, such as dealing with second-by-second fluctuations in the grid and maintaining grid frequency, explains Chris Yendell, Gravitricity's project development manager. Multiple-weight systems would be more suited to storing more energy and generating for longer periods, he says.

Proving the second-to-second response is a primary goal of a 250-kilowatt concept demonstrator that Gravitricity is building in Scotland. Its 50-metric-ton weight will be suspended 7 meters up on a lattice tower. Testing should start during the first quarter of 2021. “We expect to be able to achieve full generation within less than one second of receiving a signal," says Yendell.

The company will also be developing sites for a full-scale prototype during 2021. “We are currently liaising with mine owners in Europe and in South Africa, [and we're] certainly interested in the United States as well," says Yendell. Such a full-scale system would then come on line in 2023.

Piston Power: In Gravity Power's scheme, a piston with a mass of millions of metric tons is raised by water pressure to store energy. Allowing the piston to fall pushes water through a generator to deliver electricity. Illustration: Gravity Power

Gravity Power and its competitor New Energy Let's Go, which acquired its technology from the now bankrupt Heindl Energy, are also looking underground for energy storage, but they are more closely inspired by pumped hydro. Instead of storing energy using reservoirs at different elevations, they pump water underground to lift an extremely heavy piston. Allowing the piston to fall pushes water through a turbine to generate electricity.

“Reservoirs are the Achilles' heel of pumped hydro," says Jim Fiske, the company's founder. “The whole purpose of a Gravity Power plant is to remove the need for reservoirs. [Our plants] allow us to put pumped-hydro-scale power and storage capacity in 3 to 5 acres [1 to 2 hectares] of flat land."

Fiske estimates that a 400-megawatt plant with 16 hours of storage (or 6.4 gigawatt-hours of energy) would have a piston that's more than 8 million metric tons. That might sound ludicrous, but it's well within the lifting abilities of today's pumps and the constraints of construction processes, he says.

While these companies expect such underground storage sites to be more economical than battery installations, they will still be expensive. But nations concerned about the changing climate may be willing to pay for storage options like these when they recognize the gravity of the crisis.

This article appears in the January 2021 print issue as “The Ups and Downs of Gravity Energy Storage."

Inside the neural networks that power today's AI

Samuel K. Moore
Samuel K. Moore is the senior editor at IEEE Spectrum in charge of semiconductors coverage. An IEEE member, he has a bachelor's degree in biomedical engineering from Brown University and a master's degree in journalism from New York University.
David Schneider

Today's boom in AI is centered around a technique called deep learning, which is powered by artificial neural networks. Here's a graphical explanation of how these neural networks are structured and trained.

Thomas Smith is a technology journalist and CEO of Gado Images, an AI startup. You can read more of his writing on Codex and other tech topics at DIY Life Tech.

This summer, the artificial intelligence company OpenAI released Codex, a new system that automatically writes software code using only simple prompts written in plain language. Codex is based on GPT-3, a revolutionary deep learning platform that OpenAI trained on nearly all publicly available written text on the Internet through 2019.

As an early Beta tester, I've had extensive opportunities to put both GPT-3 and Codex through their paces. The most frequent question I'm asked about Codex is "Will this replace human programmers?" With world powers like the United States investing billions into training new software developers, it's natural to worry that all the effort and money could be for naught.