Grant Imahara: Debunker in The Box

Builder for the Discovery Channel’s “MythBusters” 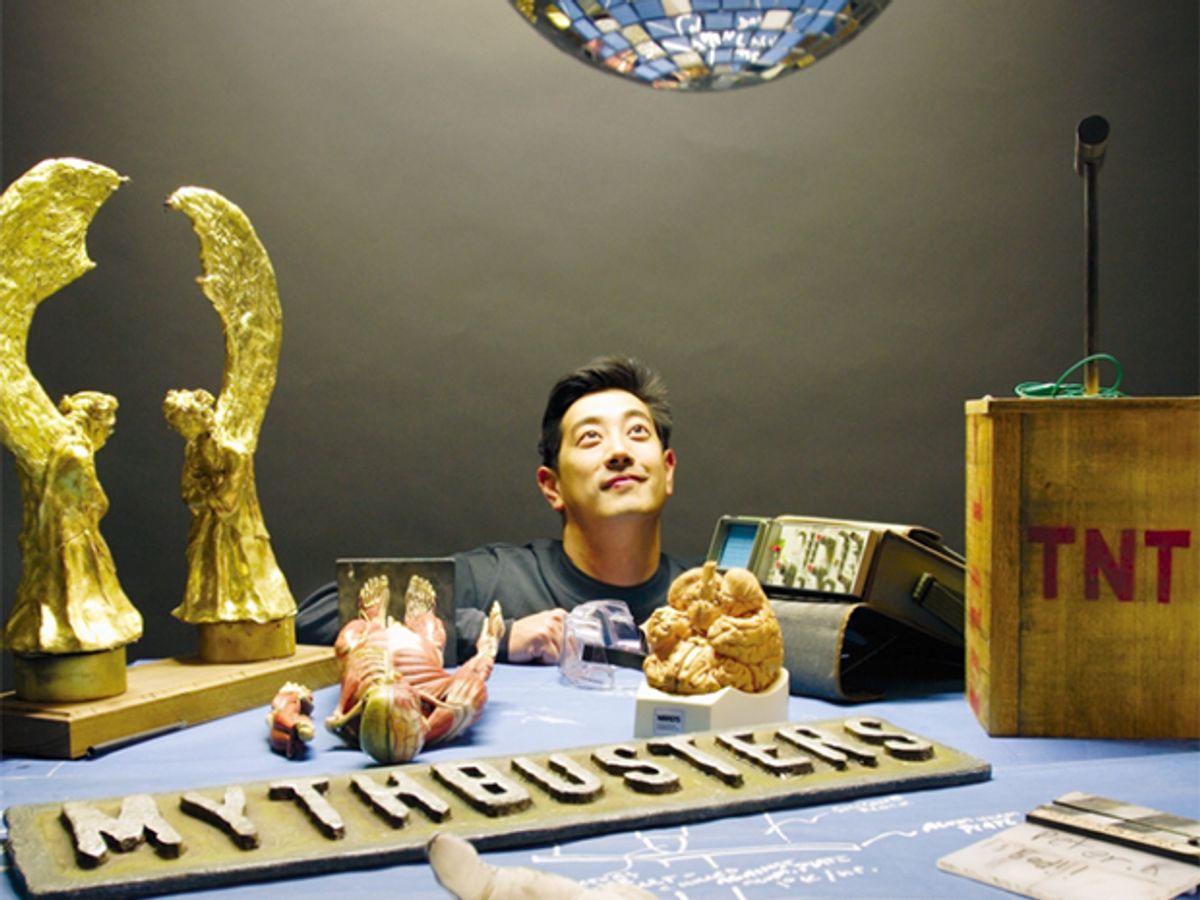 Grant Imahara needs to buy a few yards of wire mesh, so he’s on an errand to a warehouse on San Francisco’s southern outskirts. Having done some quick calculations in his head, Imahara knows exactly how much mesh he needs, but he’s stopped short as he finishes unrolling it on the cutting table.

“Hold on, Grant. Could you do that one more time?” the cameraman says, wanting to get the best angle on the shiny expanse of metal weave. Imahara grins and complies, unfurling the mesh slowly and deliberately this time for the benefit of the cameraman and the sound technician with the boom mike—the crew that often tracks his every move. “Being on camera all the time is hard to get used to,” Imahara says later. “It’s always, ‘Grant, can you do that again?’”

Although the camera’s ever-present eye may be jarring, every other aspect of Imahara’s life as a cast member on the Discovery Channel’s “MythBusters” is a tinkerer’s dream. On the show, Imahara turns a magnifying glass on myths and urban legends to separate scientific fact from fiction, and his engineering skills are integral to the job. To test the myth that Greek mathematician Archimedes designed a “death ray” that reflected sunlight into a deadly beam, for instance, he studded a junkyard satellite dish with hundreds of carefully placed mirrors. Disappointingly, the finished weapon wasn't even close to deadly.

In another episode, he dissected the rumor that the Confederate army, during the U.S. Civil War, had constructed successful long-range rockets. He built his own prototypes, using materials that would have been available in the 1860s. The verdict? Jefferson Davis and company were full of hot air.

Today he’s trying to figure out whether portable devices such as cellphones and CD players can really interfere with airplane controls, as the U.S. Federal Aviation Administration has claimed. To ensure that the devices’ electromagnetic emissions are unaffected by stray electric fields in the area, he's building a mesh Faraday cage to block the signals—hence the warehouse expedition.

The self-effacing Imahara never envisioned himself as a screen star, but he always figured construction was in his future. “As a kid, I played with Legos all the time,” he says. “They’re the perfect engineering toy. You have constraints, like the size of the bricks and the number of pegs, and you have to figure out how to use that system to build what you want.” He eventually enrolled at the University of Southern California, in Los Angeles, and signed up to major in electrical engineering, but he found himself ready to quit after two years.

When he announced he wanted to pursue screenwriting instead, the head of the engineering department persuaded him to stay. “He told me, ‘Go talk to Tom Holman and you’ll change your mind,’” Imahara says. Holman—a USC professor who also happened to be corporate technical director of Lucasfilm Ltd. and developer of the THX Sound System—succeeded in re-igniting Imahara’s passion for engineering. A work-study gig as Holman’s research assistant segued into a full-time job at Lucasfilm-affiliated THX Labs after graduation.

"For me, the coolest thing about working on the Star Wars movies is reliving one of the best parts of my childhood"

Soon, though, Imahara found himself gravitating toward his childhood passion—building—so he started hanging out with Lucasfilm's model makers after work. When a two-week trial position at Lucasfilm's Industrial Light and Magic model workshop opened up, he jumped at the chance—and ended up staying nine years, racking up credits on films such as Terminator 3: Rise of the Machines and the three newest Star Wars installments. "If something moved or lit up on set, I was involved with it," Imahara says.

One of his biggest tasks was updating an aging phalanx of R2-D2 robots, all holdovers from the original Star Wars trilogy. He scrapped the robots' red halogen lighting and replaced it with high-brightness LEDs, then programmed internal microcontrollers to flash the lights in random sequences. That upgrade lessened the droids' power consumption considerably—which was a must, because they ran on batteries.

"For me, the coolest thing about working on the Star Wars movies is reliving one of the best parts of my childhood," he says. "I used to play with the Millennium Falcon and R2-D2. Now I've had the chance to play with them in real life, as well as make a contribution to the Star Wars universe. Working on them and seeing them behind the scenes didn't detract from the magic at all. Seeing all of the work and effort that goes into these movies only enhances it."

Although Imahara loved his job, computer graphics innovations were gradually making movie model building obsolete, so early last year he began scouting out other possibilities. At the urging of former Industrial Light and Magic colleague Tory Belleci, who'd defected to "MythBusters" in 2004, he signed on with the show.

The cable network, however, apparently felt Imahara's plain-vanilla, side-parted coif wasn't ready for prime time. "After Discovery hired me, they tried to make me an appointment to get a spiky haircut, so I would look cooler on screen," Imahara remembers. "But Peter [Rees, the executive producer] interfered. He said, 'No! You hired the supernerd, and you can't go changing him now!' "

Judging by the hundreds of fan letters pouring in, viewers like Imahara just the way he is. And Imahara says he feels he has found his niche. Where else would a typical workday include trekking to the Mojave Desert to test homemade missiles or building a catapult that shoots flaming arrows? "I never really wanted the 9-to-5 cube job," he says. "This is perfect for me, because it's like real-life Lego building."

What he does: Builder for the Discovery Channel's “MythBusters”

Where he does it: San Francisco

Fun factors: Enjoys working on the eclectic "MythBusters" set, which features a motorized surfboard, a row of first-class airplane seats, and a larger-than-life rubber cast of a human rear end.

Get the all details on schedule, scoring, and streaming

Evan Ackerman
Evan Ackerman is a senior editor at IEEE Spectrum. Since 2007, he has written over 6,000 articles on robotics and technology. He has a degree in Martian geology and is excellent at playing bagpipes.
5 min read
DARPA subt robotics

The preliminary rounds of the DARPA Subterranean Challenge Finals are kicking off today. It's been a little bit since the last DARPA SubT event—the Urban Circuit squeaked through right before the pandemic hit back in February of 2020, and the in-person Cave Circuit originally scheduled for later that year was canceled.

So if it's been a while since you've thought about SubT, this article will provide a very brief refresher, and we'll also go through different ways in which you can follow along with the action over the course of the week.

Manufacturers should maintain their software and firmware indefinitely

Pesce founded, in 1991, the world's first consumer virtual reality startup. And he and others developed the Virtual Reality Modeling Language ( VRML). He also founded the first company to use VRML to deliver streaming 3D entertainment over the Web. He currently serves as Entrepreneur-in-Residence at the University of Sydney's Incubate program. In addition to being an engineer and a teacher, Pesce is also a popularizer. In 2005, the Australian Broadcasting Corporation invited Pesce to become a panelist and judge on the television series "The New Inventors." In 2011 Pesce published his sixth book, The Next Billion Seconds. In 2014, Pesce and Jason Calacanis launched the podcast This Week in Startups Australia. Later Pesce started The Next Billion Seconds podcast. And since 2014, he's been a columnist for The Register.

I recently did some Marie Kondo–inspired housecleaning: Anything that didn't bring me joy got binned. In the process, I unearthed some old gadgets that made me smile. One was my venerable Nokia N95, a proto-smartphone, the first to sport GPS. Another was a craptastic Android tablet—a relic of an era when each year I would purchase the best tablet I could for less than $100 (Australian!), just to see how much you could get for that little. And there was my beloved Sony PlayStation Portable. While I rarely used it, I loved what the PSP represented: a high-powered handheld device, another forerunner of today's smartphone, though one designed for gaming rather than talking.