Drones Take to the Skies to Screen for Methane Emissions

From a remote island in the South Atlantic, researchers track Africa-born methane 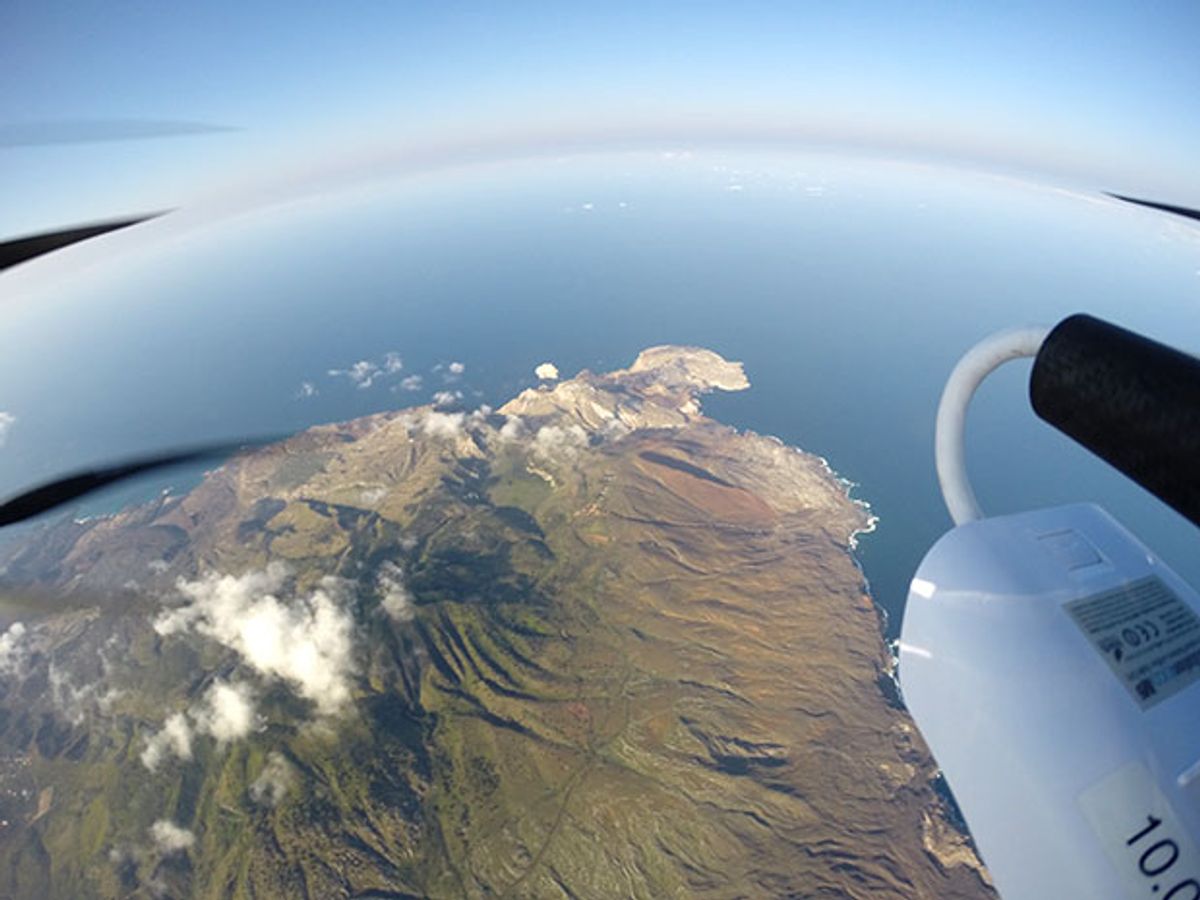 When you think of greenhouse gas emissions, you might be thinking of carbon dioxide—but methane is another significant contributor to warming that’s on the rise. Sources include large grassfires, leaking natural gas wells, natural wetland processes, belching cows, or even farting termites. But the relative contribution of each of these sources to Africa’s methane mix has been hard to track. And that’s important data to have, because the tropics account for 40 percent of global emissions. Last month, researchers report in Geophysical Research Letters, that a drone on a remote tropical island may solve that mystery.

The magic of Ascension Island, located in the middle of the South Atlantic, is the way the air flows, says Rebecca Brownlow, an atmospheric science Ph.D. student at Royal Holloway, University of London. Above about 1.6 kilometers from sea level, the air is coming straight from southeast Africa. Below it is the South Atlantic’s mix. Subtracting that from the African air gives a good sense of how much methane is generated in Africa. And the best means of making those measurements is with a high-flying drone.

“There was no other way to take these samples and to make these measurements,” says Rick Thomas, an atmospheric scientist at the University of Birmingham in the United Kingdom. Existing methane ground monitoring stations in Africa can’t discern region-wide effects, because they can’t tell how methane would end up mixing in the atmosphere.

But at this sweet spot on Ascension Island, called the trade wind inversion, drones can do the job. Scientists have tried several technologies to go above the trade wind inversion. Satellites are not accurate enough to identify the sources of methane, balloons are too time-consuming, towers are too short, and airplane flights are too expensive, the researchers say.

Drones have already been deployed to monitor methane from landfills in the UK as well as gas leaks in the United States. But the tropics are understudied, Brownlow says.

The researchers built their own drone for the Ascension Island job. They made the air-frame from carbon-fiber tubing and loaded it with a 32,000 milliampere-hour, 6-cell Lithium polymer battery. The drone carried a Tedlar plastic bag and a pump to capture and store atmospheric gases. Although CO2 can escape the bag, methane molecules are too large to leak out, Thomas says.

After launch, a computer guided the drone during its climb—as high as 2,700 meters—to get above the trade wind inversion. Ground controllers knew it had reached the inversion when the temperature went up and humidity dropped. They then signaled the drone to start pumping air into the bag.

The drone collected one or two samples at different altitudes, four to five times a day for about 20 minutes. The researchers swapped out batteries in-between flights.

Besides being atmospherically ideal for methane measurements, another advantage to Ascension was that its remoteness made it much easier to get clearance from authorities to fly at high altitudes than in a densely populated or high-air-traffic area, says Thomas. The drone only flew when there were no other flights that could interfere; the island’s government helped coordinate emergency services and logistics (such as closing a road), and the team always communicated with air traffic control.

Still, controlling for external factors when the drone was out of sight was difficult. “There’s a step change in the complexity of dealing with a platform when you can’t see it,” he says.

When the drone returned with the samples, the researchers analyzed the carbon atoms inside with a mass spectrometer. Different methane sources emit methane containing different carbon isotopes, so the researchers expected that during Africa’s peak biomass-burning season, the ratio of isotopes would indicate a clear signal of grass-fire burning.

Oddly, the ratios of carbon isotopes suggested that none of the methane sources—whether fossil fuels, swamps, or cow flatulence—was an overwhelming contributor. Thomas says this lack of distinguishability simply signifies the need for additional measurements.

Damien Maher, a biogeochemist at Southern Cross University in Lismore, New South Wales, Australia, characterizes greenhouse gas emissions. He was not involved in the study, but writes in an email that it’s important to characterize the greenhouse gas sources in order to correctly target emission reductions.

He writes that several groups are working on using drones. The technology still requires collecting samples and measuring with high-precision instruments on the ground; there are no sensors for measuring methane concentrations and the carbon isotope ratios small enough and lightweight enough to mount on a drone.

In the future, Thomas hopes to make longer term measurements and to add more automation to the drone.

Decarbonization, carbon capture, and solar-radiation management will provide work for decades to come

Seven years ago, we published an article in IEEE Spectrum titled “What It Would Really Take to Reverse Climate Change." We described what we had learned as Google engineers who worked on a well-intentioned but ultimately failed effort to cut the cost of renewable energy. We argued that incremental improvements to existing energy technologies weren't enough to reverse climate change, and we advocated for a portfolio of conventional, cutting-edge, and might-seem-crazy R&D to find truly disruptive solutions. We wrote: “While humanity is currently on a trajectory to severe climate change, this disaster can be averted if researchers aim for goals that seem nearly impossible. We're hopeful, because sometimes engineers and scientists do achieve the impossible."