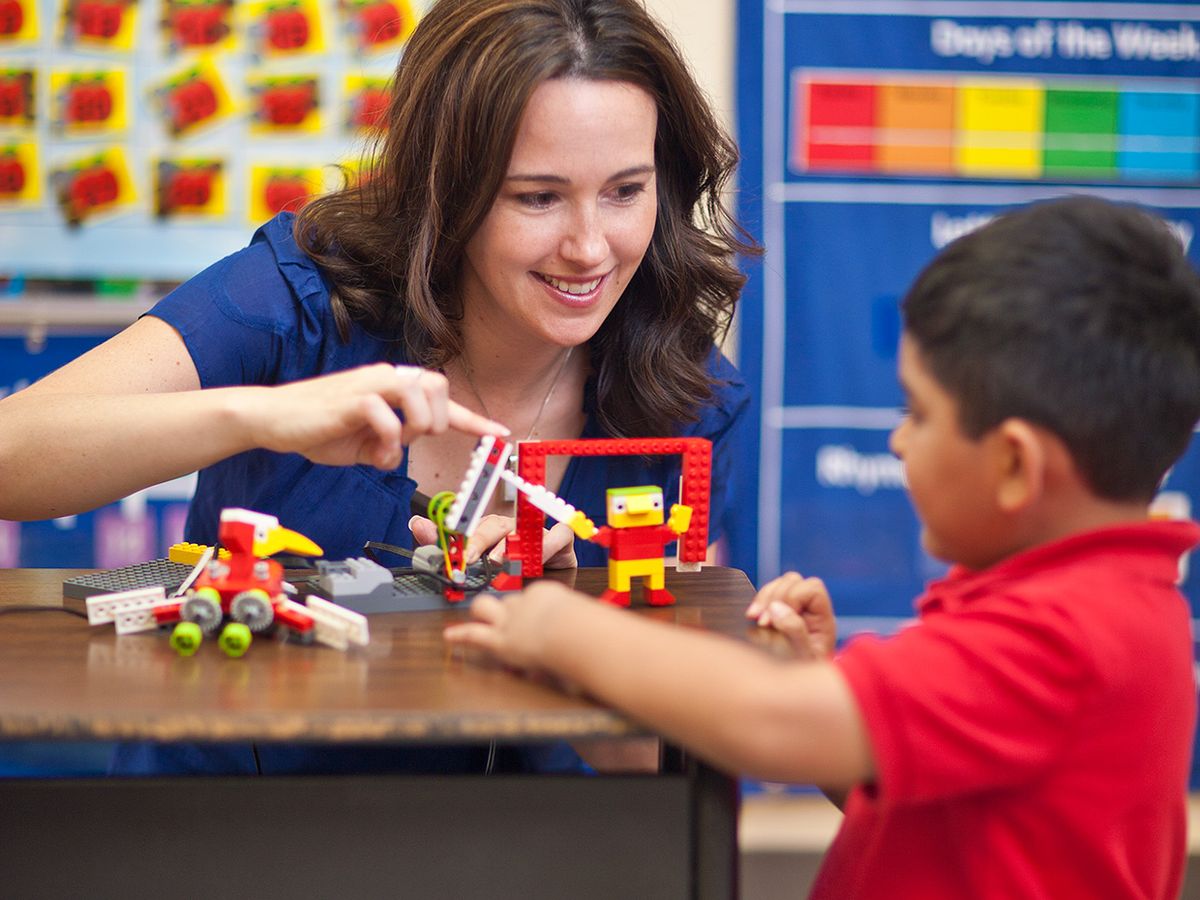 WHAT SHE DOES
Manages the creation of software for Lego robotics kits.

FOR WHOM
National Instruments Corp.

WHERE SHE DOES IT
Austin, Texas

FUN FACTORS
Travels around the world to bring robotics kits to kids; gets to visit Lego’s headquarters in Denmark and mine the company’s coffers for rare pieces.

Nicole Richard was never obsessed with Legos as a child, but the 34-year‑old has clearly caught the bug now. Her desk is adorned with a skiing Lego Santa, a camel-riding Lego pirate girl, a Lego robot wearing a hula skirt, and a bin full of rare Lego parts—Yoda heads, crabs, wineglasses, mermaid tails, and hot dogs—culled from visits to Lego headquarters in Billund, Denmark. She might have a 12-year-old boy’s dream job, she says, but it’s become hers, too.

Richard manages the development of software for two popular Lego robotics systems. One is Mindstorms NXT, a kit with a 32-bit wireless microcontroller that’s developed a devoted following among kids and robotics hobbyists since its introduction in 2006. The other is the Education WeDo Robotics Kit (WeDo for short), a construction set that introduces robotics and computing basics to children as young as 7. She’s employed by National Instruments Corp., based in Austin, Texas, which uses its LabView graphical programming environment as the basis for the Lego software.

Richard joined National Instruments in 2000, right after she graduated from the University of Colorado at Boulder, with a degree in electrical and computer engineering. She cut her teeth at NI on a series of programming and managerial jobs. She enjoyed the work, but she says she really began to find her passion in 2007, when her boss approached her about working on the Lego software. Richard says she didn’t think twice before accepting the offer—at the very least, she says, she was excited to get to work on a product with such wide appeal.

The switch turned out better than she could’ve imagined. Right after she began managing the Mindstorms software, Richard got the chance to help create the WeDo software, which lets users manipulate cartoonlike icons to create simple programs that can control motors and sensors. This was one of Richard’s first opportunities to shepherd a product from inception through release. Even more important, she had the chance to see how her work was having an impact in classrooms thousands of miles away, in the United States and beyond.

And “beyond” includes Cambodia. In 2010, Promoting Education, emPowering Youth, a nonprofit group working to improve Cambodian schools, was looking for help with 10 donated WeDo kits. A representative from the organization asked if anyone at NI would be passing through the area and could show teachers how to use the kits. Richard had already been planning to visit Bali for a wedding, so on impulse, she added a week to her trip. In September, she and a friend made the 30-hour journey from Austin to Siem Reap, in northwestern Cambodia, and then on to the village of Chanleas Dai. There they trained teachers and spent a day with 18 students who came in eager to learn, despite the fact that it was the last day of their summer vacation. “It was overwhelmingly different there,” Richard says. “These kids were motivated to learn unlike any kids I’d ever seen before. They don’t take education for granted there at all.”

Last year Richard traveled to Jharkhand, in eastern India, and spent a week conducting Lego workshops in a small orphanage there. Just as in Cambodia, she says, the kids took to the technology straight off. In just a few hours, even children who had never used a computer before were well on their way to building drumming robotic monkeys. Others were enthralled. “It was only after the [uninterruptible power supplies] lost all of their charge and the computers shut down that we could get any of them to leave,” she says. “They’re hungry for this stuff.”

Richard wasn’t sure whether her visits would have a lasting impact. But she kept in touch with the teachers at the Cambodian school, and she was thrilled to hear that they had started two robotics clubs. Demand for the clubs was so high that the teachers had to put an application process in place. Richard now hopes to replicate this kind of activity elsewhere; lately she’s been working with nongovernmental organizations to set up engineering clubs in Peru and India. The ultimate goal, she says, is for the children to develop critical thinking, problem solving, and technical skills and use them in turn to help address some of the challenges their communities face.

Given Richard’s belief in the transformative effects of technology, it’s hard to believe that she herself wasn’t always so focused on engineering as a career. Although her parents are both engineers, she says she had little sense of what an engineering career involved until she joined NI. Working with engineers to troubleshoot communication lines within Mars rover prototypes and configure strain gauges to measure the flex of snowboarding boots, she finally got a sense of what engineers do for a living. Then it took her a bit longer to find her calling.

“I chose to go into engineering because I knew I could make a good living at it, and I liked programming,” Richard says. “It was only later that I became inspired by the opportunities it offers to really make an impact.” She hopes her outreach efforts can help kindle a passion for engineering in others. “It took me a while to connect those dots for myself,” she says. “Now I’m out trying to help kids make those connections for themselves more quickly.”