Has the United States got it wrong with digital terrestrial TV? 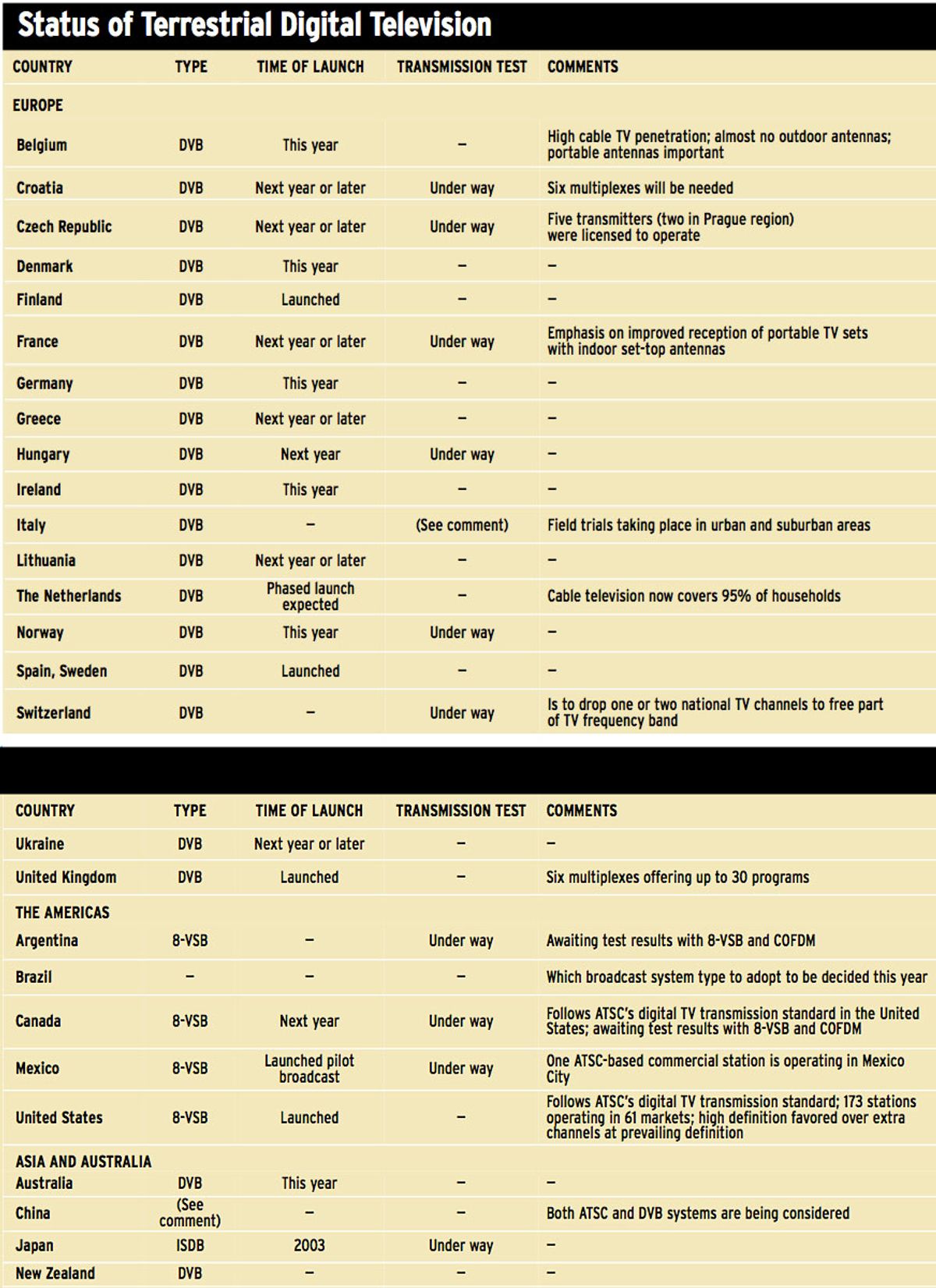 Status of Terrestrial Digital Television
Click on the image for the full table view.

Few would dispute that Hughes, RCA, and Thomson got it right when they launched the U.S. digital satellite pay-television service DirecTV six years ago. It gave viewers a long-overdue and welcome alternative to cable TV. But today new digital terrestrial network services in the United States are creating little interest. Receivers are expensive and sales slow. For example, a leading consumer electronics store in New York City offered, at press time, Panasonic HDTV-compatible sets for prices from US $1500 to $2800. Although there are now more than 170 TV stations in the country that use the digital TV standard set up by the Advanced Television Systems Committee (ATSC), Washington, D.C., only around 625 000 ATSC sets have been sold.

2.DTV.f1Across the Atlantic, the United Kingdom leads Europe with digital services that are a roaring success there. After just two years, 8 out of 10 homes are close enough to a digital terrestrial transmitter to pick up signals with rooftop antennas. Adapter boxes that plug into existing TV sets are so inexpensive that the pay-TV broadcasters can afford to give them away--like free razors for which blades are then sold. Around six million homes--some 20 percent of the UK total--are now receiving digital TV from either terrestrial or satellite transmitters. (Terrestrial pay-TV broadcaster On Digital has a million subscribers, and BSkyB, part of Rupert Murdoch's News International empire, broadcasts by satellite to around five million homes.)

The UK government minister responsible for promoting TV there, Chris Smith, is gung-ho about switching off analog. He calls digital the "big dream" and talks of the big nationwide changeover to digital, starting in 2006 and ending by 2010.

In reality, all is not quite as rosy as it looks from the statistics, however. The Independent Television Commission (ITC), London, which controls digital broadcasting in the UK, warns that although the country is currently the world's leader in adopting digital terrestrial television, it is too early to talk about analog switch-off dates.

If the UK cannot set a date, what hope has the United States of keeping to its plans for analog shutdown in 2006, when the market and advertising revenue will not yet be there? And why is the United States lagging in the terrestrial stakes?

"The Americans have chosen the wrong system," said the ITC's head of public affairs, James Conway.

HDTV top priority in the U.S.

Europe, in designing its digital TV system, took into account its own commercial high-definition TV disaster of 10 years earlier, the mainly analog HDTV system called MAC, for multiplexed analog components. With DVB, for Digital Video Broadcasting, system, Europe turned the technology's focus away from high definition and instead used it to add channels in standard definition. As a result of this choice, manufacturers can make relatively low-cost adapter boxes for existing TV sets, and broadcasters who charge for viewing can afford to give the boxes away.

Picture quality and receiver cost are not the only differences between the European and North American terrestrial systems. ATSC uses the 8­vestigial-sideband modulation system (abbreviated as 8-VSB, with B for broadcast). In this modified amplitude modulation system, the lower sideband is virtually eliminated and only the upper sideband is transmitted, leaving the signal bandwidth at 6 MHz. That sideband is switched at high speed through eight phase and amplitude states. The setup lets the 6-MHz channel carry 19 Mb/s of digital data. But the broadcast can be corrupted by interference or multipath reflections, which mix the direct broadcast signal with delayed replicas.

The European DVB terrestrial system relies on COFDM, or coded orthogonal frequency-division multiplexing. The broadcaster divides the TV channel (8 MHz in Europe) into several thousand narrow subchannels. The digital code (usually flowing at 24 Mb/s) is split into that many streams, with one stream sent on each subchannel. So each subchannel carries relatively fewer bits of code per unit time--a few kilobits per second--spaced relatively widely apart in time. Unwanted reflections arrive in the wide gaps between the bits and are rejected. Often terrestrial DVB can work with only a set-top antenna or a mobile receiver, instead of a full-sized roof-mounted antenna.

Arguing that COFDM is a better technology, the Sinclair Broadcasting Group, Hunt Valley, Md., which holds the largest number of TV broadcast licenses in the United States--more than all four networks combined--has lobbied the U.S. Federal Communications Commission to ditch 8-VSB and adopt the COFDM system. But this move would make existing U.S. digital television equipment obsolete, on both the broadcast and receiving ends. Hence, the COFDM issue has aroused widespread uncertainty within the industry. As a result of the COFDM versus 8-VSB controversy, many small broadcasters are reluctant to upgrade their stations to HDTV.

Lagging behind the UK in the digital rollout is mainland Europe. Countries like the Netherlands are heavily cabled, and the Soviet Union's breakup has left Eastern countries strapped for cash. Sweden and Spain have now launched DVB terrestrial services, but consumer interest is less than in the UK as adapters are not free.

A Babel of standards

Outside Europe and the United States, there is a new Babel of different standards. Canada and Mexico have decided to use the ATSC system, but are waiting and watching the U.S. rollout and the outcome of tests of COFDM against 8-VSB. A similar situation exists in Argentina, Korea and Taiwan.

China and Hong Kong are still comparing ATSC and DVB. India and Singapore have opted for DVB, but with the Dolby Digital surround system instead of the Moving Picture Experts Group (MPEG) stereo originally specified by the DVB standard. Australia plans to use DVB, but with higher-definition pictures and Dolby Digital.

Japan, like Europe, initially went down the analog route, with its Hi Vision 1125-line HDTV satellite service. It has now developed a unique digital system, Integrated Services Digital Broadcasting (ISDB). An ISDB satellite service was due to start regular broadcasts by the end of last year, with terrestrial broadcasting launching in 2003. ISDB uses a modified form of COFDM, with several thousand subchannels in 13 groups carrying the TV signal in different resolutions. When reception is good and all the groups are received, the picture quality is top notch. When reception is poor, the definition is less but there is still something to watch. (There is no graceful degradation with ATSC or DVB: the pictures are either good or nonexistent.)

Japan has also chosen a different sound system. Instead of Dolby Digital or MPEG, ISDB uses advanced audio coding (AAC) from one of the developers of MPEG audio, Germany's Fraunhofer Institute, as well as from Dolby, Sony and AT&T. The coding can halve the data rate with no loss of quality. Japan is now lobbying those countries not yet committed to ATSC or DVB to adopt IDSB.

BARRY FOX is a staff writer for New Scientist magazine, based in London.

A rundown on the European situation is supplied by the Digital Terrestrial Action Group, in Geneva, at www.digitag.org.