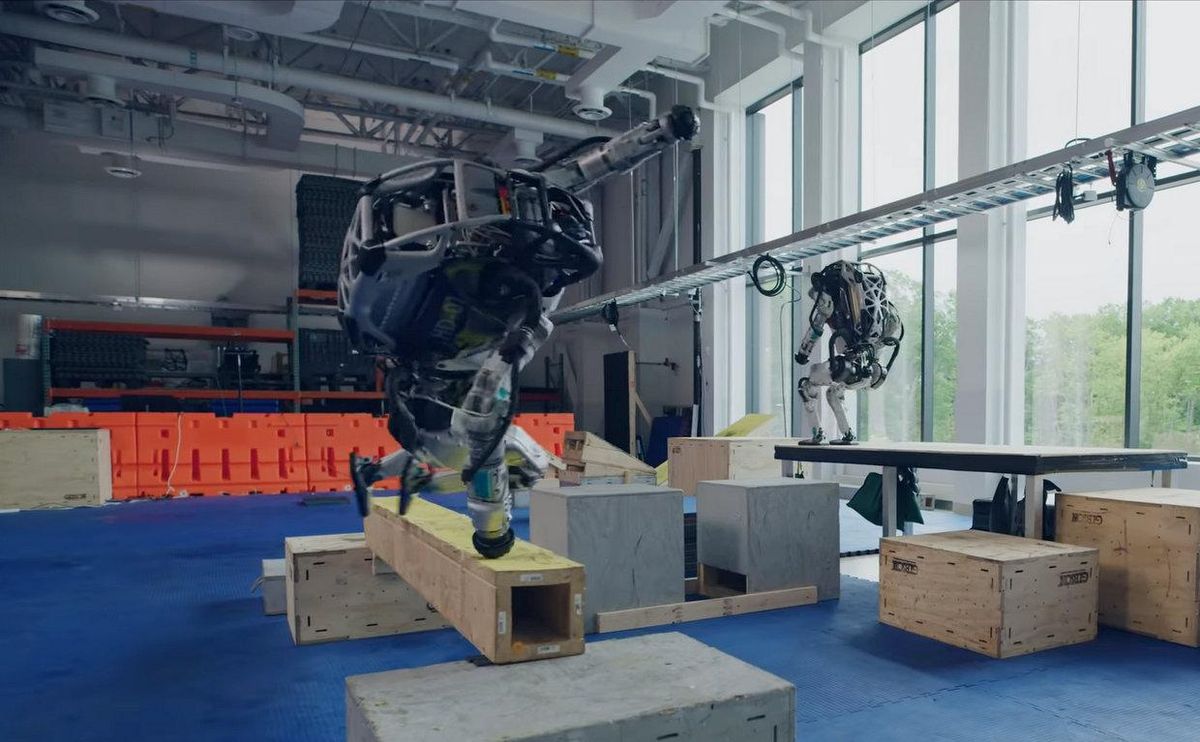 Boston Dynamics has just posted a couple of new videos showing their Atlas humanoid robot doing some of the most impressive parkour we've yet seen. Let's watch!

Parkour is the perfect sandbox for the Atlas team at Boston Dynamics to experiment with new behaviors. In this video our humanoid robots demonstrate their whole-body athletics, maintaining its balance through a variety of rapidly changing, high-energy activities. Through jumps, balance beams, and vaults, we demonstrate how we push Atlas to its limits to discover the next generation of mobility, perception, and athletic intelligence.

There are a couple of new and exciting things in this video. First, Atlas is doing some serious work with its upper body by vaulting over that bar. It's not supporting its entire weight with one arm, since it's jumping, but it's doing what looks like some fairly complex balancing and weight management using all four of its limbs at once. Most of what we've seen from Atlas up to this point has been lower body focused, and while the robot has used its arms for forward rolls and stuff, those moves have been simpler than what we're seeing here. Aaron Saunders, Boston Dynamics' VP of Engineering, suggested to us earlier this year that the Atlas team would be working on more upper-body stuff, it looks like they're now delivering. We're expecting that Atlas will continue to improve in this direction, and that at some point it'll be able to do the equivalent of a pull-up, which will open up a much wider variety of behaviors.

The second big new thing is that Atlas is now leveraging perception much more heavily, according to Scott Kuindersma, the Atlas team lead at Boston Dynamics, who wrote about it in a blog post:

"Atlas's moves are driven by perception now, and they weren't back then," Kuindersma explains. "For example, the previous floor routine and dance videos were about capturing our ability to create a variety of dynamic moves and chain them together into a routine that we could run over and over again. In that case, the robot's control system still has to make lots of critical adjustments on the fly to maintain balance and posture goals, but the robot was not sensing and reacting to its environment."

In this iteration of parkour, the robot is adapting behaviors in its repertoire based on what it sees. This means the engineers don't need to pre-program jumping motions for all possible platforms and gaps the robot might encounter. Instead, the team creates a smaller number of template behaviors that can be matched to the environment and executed online.

This is a pretty big deal. Without perception, Atlas was running its routines blind—as long as the environment was kept more or less completely static, the robot would do okay, but obviously that's a major limitation. What Atlas is doing in this new video is still somewhat limited, in the sense that it's still relying on template behaviors created by humans rather than doing true dynamic planning, but this represents a lot of progress.

One other thing that's worth paying attention to is how Boston Dynamics thinks of humanoid robots:

"Humanoids are interesting from a couple perspectives," Kuindersma says. "First, they capture our vision of a go-anywhere, do-anything robot of the future. They may not be the best design for any particular task, but if you wanted to build one platform that could perform a wide variety of physical tasks, we already know that a human form factor is capable of doing that."

This tends to be the justification for humanoid robots, along with the idea that you need a humanoid form factor to operate in human environments. But Kuindersma is absolutely right when he says that humanoids may not be the best design for any particular task, and at least in the near term, practical commercial robots tend not to be generalists. Even Boston Dynamic's dog-like robot Spot, with its capable legged mobility, is suited primarily to a narrow range of specific tasks—it's great for situations where legs are necessary, but otherwise it's complex and expensive and wheels often do better. I think it's very important that Boston Dynamics is working towards a go-anywhere, do-anything robot, but it's also important to keep expectations in check, and remember that even robots like Atlas are (I would argue) a decade or more away from this generalist vision.

Meanwhile, Boston Dynamics seems, for better or worse, to be moving away from their habit of surprise posting crazy robot videos with zero explanation. Along with the new parkour video, Boston Dynamics has put together a second behind the scenes video:

Can I just say that I love how absolutely trashed the skins on these robots look? That's how you know good work is getting done.

There's a bunch more detail in this blog post, and we sent Boston Dynamics a couple of questions, too. We'll update this post when we hear back later today.

Agility Robotics’ Digit Is Getting Back to Work

Neural networks can be disastrously brittle, forgetful, and surprisingly bad at math

Artificial intelligence could perform more quickly, accurately, reliably, and impartially than humans on a wide range of problems, from detecting cancer to deciding who receives an interview for a job. But AIs have also suffered numerous, sometimes deadly, failures. And the increasing ubiquity of AI means that failures can affect not just individuals but millions of people.

Increasingly, the AI community is cataloging these failures with an eye toward monitoring the risks they may pose. "There tends to be very little information for users to understand how these systems work and what it means to them," says Charlie Pownall, founder of the AI, Algorithmic and Automation Incident & Controversy Repository. "I think this directly impacts trust and confidence in these systems. There are lots of possible reasons why organizations are reluctant to get into the nitty-gritty of what exactly happened in an AI incident or controversy, not the least being potential legal exposure, but if looked at through the lens of trustworthiness, it's in their best interest to do so."