An artist's rendering shows SpaceX's Crew Dragon capsule, which was designed to ferry astronauts and tourists to the space station and back.Illustration: SpaceX

Two possible successors to NASA’s space shuttle are scheduled to visit the International Space Station in August, in their last big step before they transport humans. A successful flight test for Boeing’s CST-100 Starliner and SpaceX’s Crew Dragon spacecraft would show that these vehicles are finally ready to carry both NASA astronauts and space tourists into orbit.

Much is riding on these flight tests as NASA seeks to renew U.S. capability for crewed spaceflight. Back in 2014, Boeing and SpaceXreceived NASA contracts worth a combined US $6.8 billion, to transport astronauts to the space station. But both companies have repeatedly pushed back their original launch dates.

NASA and Boeing officials have suggested that the first crewed flights of the commercial spacecraft may not happen until 2019 at the earliest—and that’s only if both spacecraft perform smoothly during their upcoming tests.

“Commercial crew is the only game in town for launching American astronauts to the International Space Station from American soil on American launch systems,” says Marcia Smith, founder of the Virginia-based Space and Technology Policy Group, a news and analysis organization. “If the United States wants to stop using Russian vehicles, NASA will have to make commercial crew work, whatever the cost and whatever the schedule turns out to be.”

Boeing has named its first flight demonstration Orbital Flight Test; SpaceX has named its effort Demo-1 Flight Test. Both tests share the same goals: Show that the spacecraft can launch into orbit, perform automated docking with the space station, and land safely back on Earth.

These dry runs, without any astronauts aboard, also aim to support the companies’ claims that their spacecraft can function autonomously. “We will be proving that every system that does not interact with a human operates as intended on the Orbital Flight Test,” says Rebecca Regan, a Boeing representative.

In future, crewed missions, the Boeing Starliner and SpaceX Crew Dragon will let astronauts on board and mission controllers on the ground take over during key phases of flight. Starliner, in particular, allows for manual control after the spacecraft separates from its rocket in orbit and prior to when it deploys its parachute upon the return to Earth. 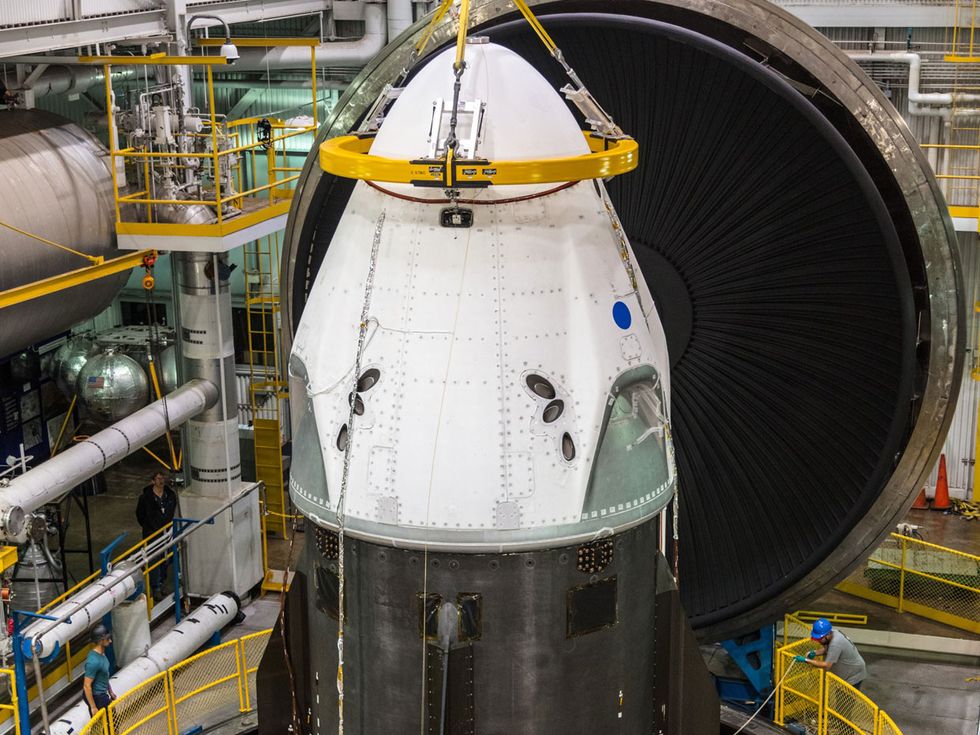 Crew Dragon is a modified version of the Dragon, which has already made multiple supply runs to the space station.

Boeing’s Starliner will hitch a ride into space aboard a United Launch Alliance Atlas V rocket, which has achieved nearly 80 successful launches since 2002. SpaceX’s Crew Dragon will fly aboard the Block 5, the latest version of the company’s Falcon 9 rocket, which has launched about 60 times in different forms since 2010.

Each spacecraft accommodates up to seven passengers, who will wear temperature-controlled suits—blue for Boeing and black-and-white for SpaceX—designed to withstand a sudden loss of pressure or a fire in the crew module. Flight controls on both vehicles consist of touch screens and tablets instead of the switches, dials, and paper flight logs from the early days of spaceflight.

Though built for identical missions, the spacecraft and their operations differ in certain design details. For example, Crew Dragon has three windows as opposed to Starliner’s two windows.

Each vessel also has an abort system to carry astronauts to safety during emergencies that occur while the spacecraft waits on the launchpad or as it rockets into space. To make sure those systems operate as intended, SpaceX is planning an in-flight test of its abort technology, whereas Boeing will conduct an abort test from the pad (SpaceX completed a version of this test in 2015).

The return to Earth will also look different for Starliner and Crew Dragon. Both vehicles will rely on the tried-and-true parachute approach to slow their descent after reentry through the Earth’s atmosphere. But Starliner aims to land on solid ground with the help of an airbag system to cushion the shock, while Crew Dragon will cool its heels with a water landing in the ocean.

This article appears in the August 2018 print issue as “Boeing and SpaceX Test the Next U.S. Ride to Space.”

SpaceX and Dish’s Super-Shady War for the World

NASA’s Space Launch System will carry Orion to the moon.

At the start of each year, IEEE Spectrum attempts to predict the future. It can be tricky, but we do our best, filling the January issue with a couple of dozen reports, short and long, about developments the editors expect to make news in the coming year.

This isn’t hard to do when the project has been in the works for a long time and is progressing on schedule—the coming first flight of NASA’s Space Launch System, for example. For other stories, we must go farther out on a limb. A case in point: the description of a hardware wallet for Bitcoin that the company formerly known as Square (which recently changed its name to Block) is developing but won’t officially comment on. One thing we can predict with confidence, though, is that Spectrum readers, familiar with the vicissitudes of technical development work, will understand if some of these projects don’t, in fact, pan out. That’s still okay.

Engineering, like life, is as much about the journey as the destination.

See all stories from our Top Tech 2022 Special Report ➞