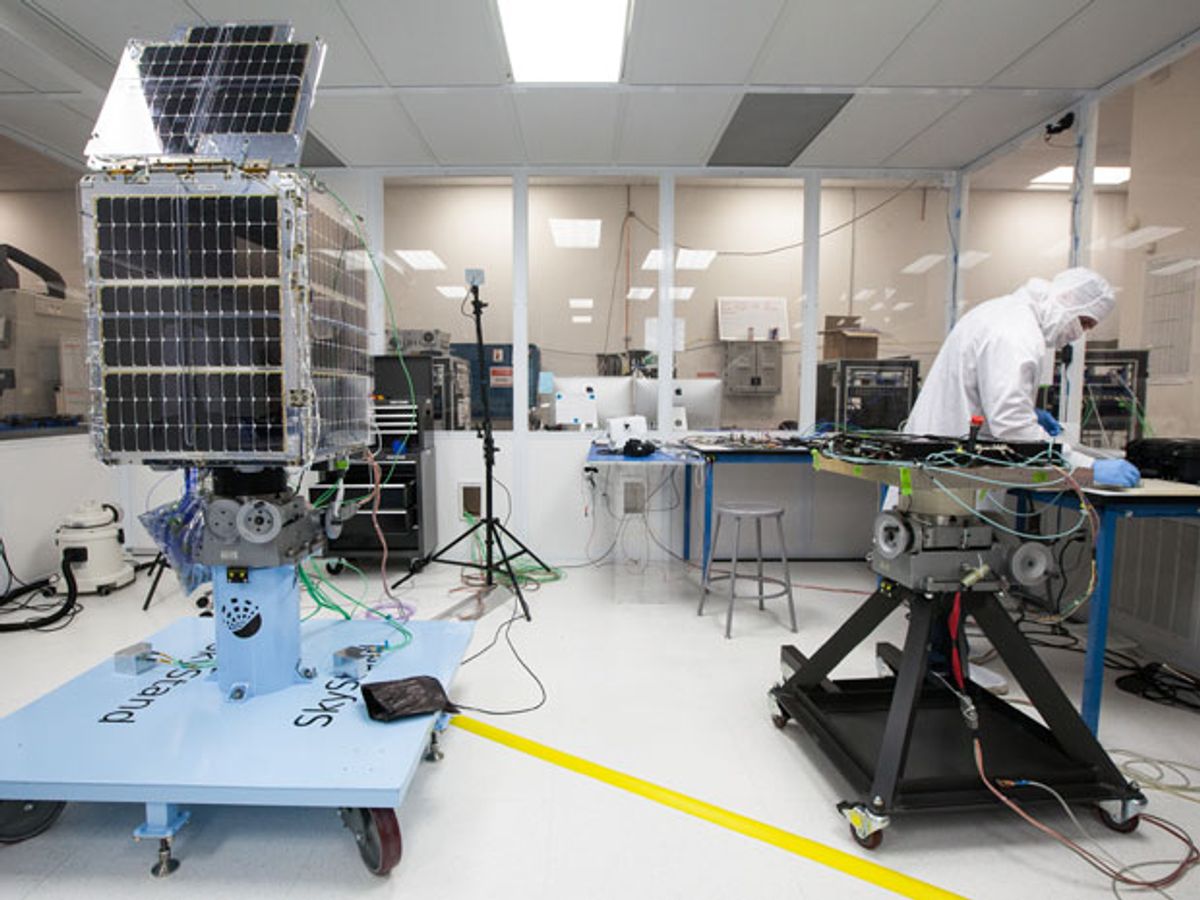 What if you could get cheap satellite pictures, no more than a few hours old, of any spot on the globe? What would you do with them? Skybox Imaging, a four-year-old company based in Mountain View, Calif.—just across the freeway from spy-satellite pioneer Lockheed Martin Corp.—wants to find out. The company’s first satellites go up this year, and within the next five years Skybox expects to have a constellation of 24 satellites imaging the globe, able to view any spot on Earth three or four times a day.

Although there are already several commercial satellite-image outfits such as DigitalGlobe, Spot Image, and RapidEye, these companies can afford only a few eyes in the sky, as each conventional imaging satellite costs hundreds of million of dollars. This means they can’t capture images frequently enough to monitor situations prone to rapid changes, like the positioning of ships and trucks or the unfolding impact of natural disasters. The images also often require a staff of specialists to extract useful information.

Founded in 2009 by Dan Berkenstock, John Fenwick, Ching-Yu Hu, and Julian Mann—then graduate students studying aerospace engineering at Stanford University—Skybox is tackling these challenges with a two-pronged approach. First, it’s making space hardware that’s simple, small, and practically disposable, as opposed to sophisticated, big, and superreliable. In this way Skybox hopes to field multiple satellites for less than the cost of a single conventional satellite.

Made from consumer-grade components, Skybox’s 1-meter-resolution satellites can be built and launched into orbit for well under $50 million each, with a planned operating lifetime of four years. This decision—to go to a four-year life from the 10- to 20-year life typical of today’s commercial satellites—was critical, says chief engineer Jonny Dyer, as it meant Skybox could use lower-cost parts and some off-the-shelf electronics. Not only does this make the satellites themselves less expensive to build, but the lighter satellites can be launched using smaller and cheaper rockets.

Second, Skybox is tapping into the Silicon Valley zeitgeist. Thanks to Web companies like Google and Facebook, the Valley is currently full of people who know how to manipulate large amounts of data and make it accessible to the average consumer. Skybox is using the expertise of these people to build tools that improve the quality of the images and automatically track changes within them—for example, counting the number of cars in a parking lot. The Skybox satellites will also be able to take short videos, which will help in tracking movement. Making satellite imagery more timely and more accessible for a larger number of users will explode the market, says Berkenstock, the company’s chief product officer.

To date, Skybox has raised $91 million. Khosla Ventures is one of the investors. The VC firm’s general partner, Pierre Lamond, admits it was an unconventional investment, with Skybox the first commercial space enterprise that hasn’t made government contracts an anchor of its business plan.

Skybox’s first launches, on Russian rockets, are scheduled for later this year. Once Skybox gets going, it plans to launch six to eight satellites a year thereafter, first building up the constellation and then replacing satellites as they fail. The company will need to get about eight satellites up to start breaking even, Lamond calculates, and that will require more investment dollars. After that, with a fairly conservative estimate of return on investment, Skybox will be able to fund the launches itself, he says.

Stéphane Gounari, an analyst with Northern Sky Research, says that getting to that break-even point may be a challenge: “They will face strong competition,” he says, and no one can tell if the company will succeed “before we see what quality of imagery they have at what cost.”

Skybox says that customers are lining up, although none have been announced publicly so far. But what really has the company founders excited are the customers they’ve yet to meet—those who will build currently unforeseen applications for imaging data, in the same way widespread access to GPS data sparked such novel applications as augmented-reality apps on smartphones.

Tracking Plastics in the Ocean By Satellite