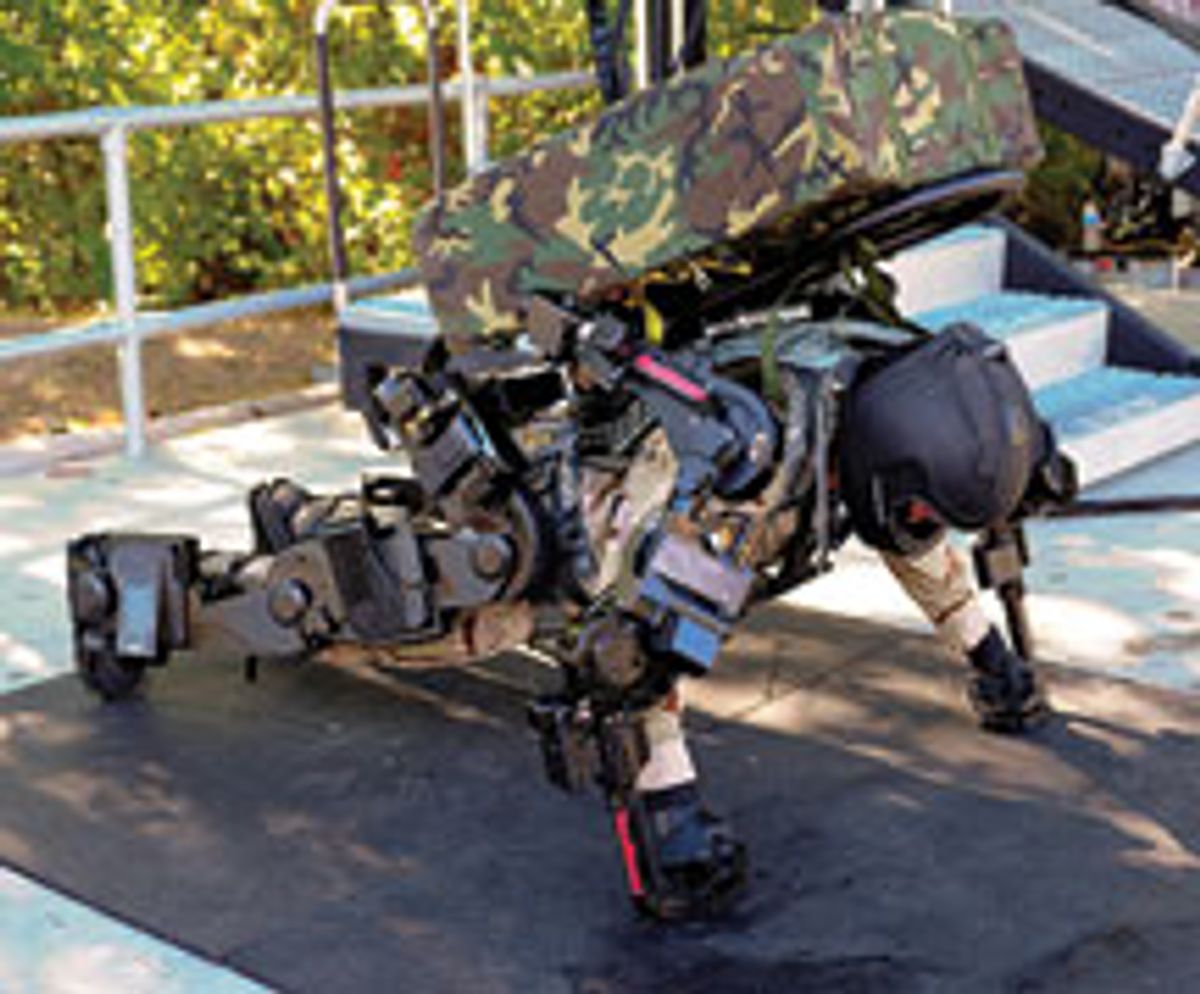 Raytheon Sarcos's second-generation exoskeleton robotics suit, XOS 2, which was named one of Time magazine's 50 Best Inventions last year, is now a mere five years away from production, its inventors say.

The wearable robotics suit augments the operator's strength by using a system of high-pressure hydraulics, sensors, actuators, and controllers to bear the weight of an object, while leaving its wearer agile enough to kick a soccer ball. It's also lighter, stronger, and more environmentally resistant, and it uses half the power of the company's first exoskeleton, XOS 1, which rolled out in 2008. The XOS 2 has been nicknamed the Iron Man suit in homage to the high-tech power suit in the comics and movies.

Since the 2010 introduction of the XOS 2, its engineers have continued to tweak the device, further increasing its power efficiency by cutting the suit's weight and redesigning the servo valves so that more hydraulic fluid can be forced through them without undue turbulence. They aim to reduce power consumption by more than 70 percent. That in turn will lead to smaller, lighter power sources and, ultimately, an increased payload.

The XOS 2 "doesn't feel any different if it's unloaded or you put 150 pounds [68 kilograms] on the back," says XOS 2 test engineer Rex Jameson. "I don't feel the strength, but I can pick up more. The big deal is that it takes a lot less power."

Raytheon Sarcos, a robotics development group within Raytheon's Integrated Defense Systems division, designed the suit to lighten a soldier's load and help the military reduce injuries. Military support personnel can find themselves each lifting as much as 7300 kg of supplies and armaments in a day, leading to considerable orthopedic damage.

"With a tethered power source, you could likely see [the exoskeleton deployed] within five years," says Fraser Smith, vice president of operations for Raytheon Sarcos, located in Salt Lake City. "For a suit that operates on its own power, it's probably more like a decade away."

Life has imitated art in more ways than just the suit's name. Eliot Brown—who illustrated the engineering mechanisms of the Iron Man suit for The Official Handbook of the Marvel Universe in 1983 and The Iron Manual in 1994—envisioned a suit in which computer-driven sensors were woven throughout instead of just in the joints.

The XOS 2 exoskeleton does indeed use a variety of sensors for determining force and position throughout the system. The sensors are connected via Ethernet to distributed computer processors in each joint, which prompt actuators (mechanical devices that turn energy into motion) to deliver up to 200 kg per square centimeter of force through high-pressure hydraulics.

"Basically, the person moves the way they normally would, and the exoskeleton keeps up," says Smith. "There is no external computation. Each joint has its own processing capability, and the joints communicate with each other." The revamped suit lets the wearer lift 50 lbs. (23 kg) with each arm at full horizontal extension.

Bob Layton, who cowrote and illustrated the comic's seminal "Demon in a Bottle" story line in 1979, adapted bionics and cybernetics concepts into his design of the Iron Man suits. "I was always more concerned about function, that it work as an extension of his mind and body," he says. "It makes sense that it would find its way into reality. All those engineers were probably comic geeks as kids."

Smith agrees. "This is a company full of geeks—and proud of it!" he laughs. "Most people here were very familiar with all those superheroes, although I'm partial to the early Iron Man comics with the guy dressed as a stove."

Susan Karlin regularly writes about the intersection of pop culture and technology for IEEE Spectrum. In “The King of Comic-Con” she profiled John Rogers, who runs what Karlin called “one of the world’s largest and strangest conventions.”