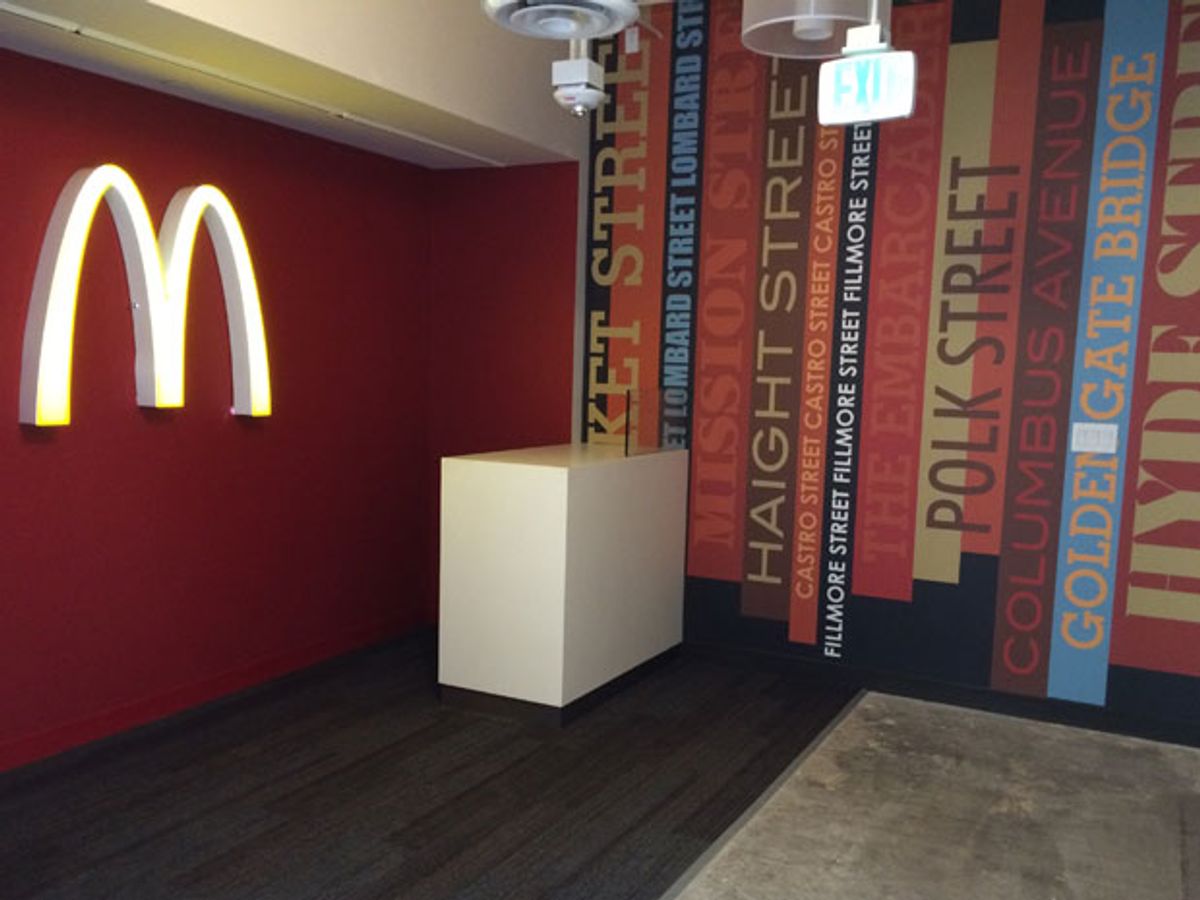 The Market Street area of San Francisco has recently lured more than a dozen companies, most focused on some kind of social, sharing, or digital payments technology. The first wave, with Twitter as the most prominent settler, was drawn by tax breaks intended to jump-start redevelopment in the mid-Market neighborhood, a.k.a. the Tenderloin. But now there are enough young, hip, and successful tech companies or branches of companies around Market Street—like Spotify, Yammer, Square, and One Kings Lane—to be a draw on their own.

To this tech Mecca has come McDonald's. The company has reportedly already hired a few engineers from Paypal, Facebook, AOL, and Yahoo at its digital outpost at 658 Market, a landmark Beaux-Arts building, and it has space for about 20 more.  According to Advertising Age, McDonald’s has been testing mobile payments, augmented reality apps, and digital signage, and it has been talking to venture capitalists in a hunt for emerging digital technologies.

But the company’s official plans are still carefully nonspecific. A McDonald’s spokesman told me:

Opening a digital hub in San Francisco is one of the first steps on our journey to drive our global digital vision to bring a new level of everyday convenience and fun to the world...we want a presence in the heart of the tech community enabling us to attract world class talent.

We’re not exactly sure what we should be doing in this whole mobile, social, yadda yadda world. But if we put an office in San Francisco where there are lot of those young tech guys in hoodies walking around maybe we can get a few inside long enough to figure it out for us. Because hey, Starbucks is killing it with their payment app.

This strategy could certainly work—changing jobs by walking across the street is definitely part of tech culture.

Leading the San Francisco effort is Atif Rafiq, the company’s chief digital officer. He came to McDonald’s late last year from Amazon, where he was head of Kindle Direct Publishing, and his resume includes Yahoo and AOL, so he at least knows people who know the people that could help McDonald’s figure out the whole digital thing.

I wish him well. But I do worry that there’s one thing McDonald’s may have trouble with: Tech companies in a tough hiring market have to compete on many fronts—including food. And in the land of agave sweetened organic beverages and hemp guacamole, what will be served in the McDonald’s corporate café?