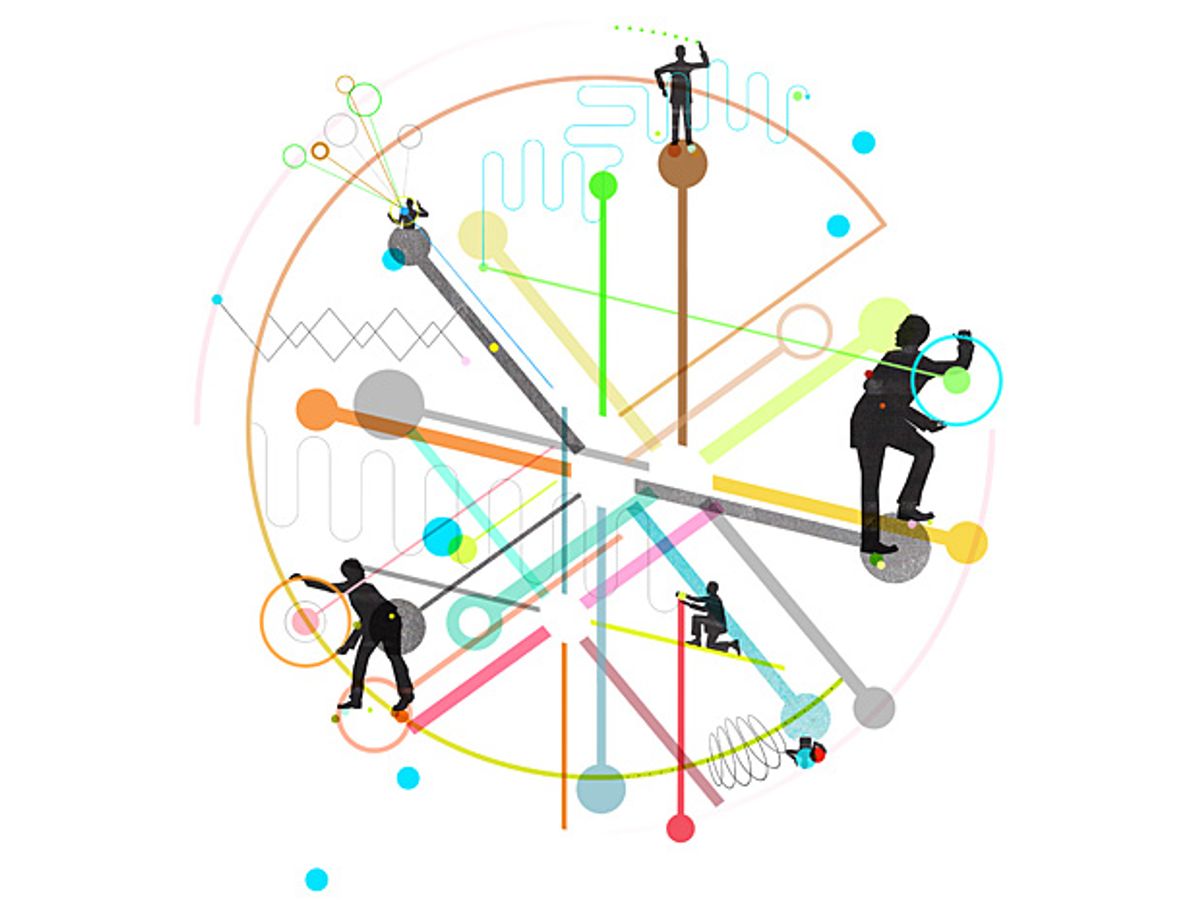 Hardware development, like many engineering projects, is typically a group effort, with contributors increasingly working from home or across multiple buildings, organizations, states, countries, and continents rather than face-to-face. And as a new wave of hardware start-ups are finding out, coordinating those contributors often requires more sophisticated tools than just e-mail and phone calls.

Many general-purpose remote-collaboration platforms are currently available and in use by engineers, such as Dropbox for file sharing, Basecamp for project management, Google Docs for collaborative document sharing and editing, and WebEx for screen sharing. But the nature of engineering often requires more specialized systems, such as the Git platform, which is designed for managing changes to source code and documentation.

Originally developed for managing the source code of Linux, Git has found broader use, often in conjunction with other tools. Matt Wood, principal engineer in charge of hardware and firmware development at FanWise, which makes mobile-commerce hardware modules for vending machines, arcade games, and other devices, says, “We use [commercial] tools like Atlassian Stash to do private Git repositories…for hardware files like schematics, board layouts, [bills of materials], and firmware.”

But Git isn’t always well suited to hardware. “Our private Git repository lacks a sign-off procedure—we create a tag for released files, but the system doesn’t require any formal review by the team to do that,” says Wood. “So we have to use custom tools to make sure we check off against the specs. You have to know how you’re handling formal review and sign-off so a mistake isn’t caught after a design has been released to manufacturing and 10,000 bad boards have been made.”

One company that’s trying to provide better support for distributed hardware tools for EEs is Altium. “The old methods of copy and paste tend to be messy and error prone and require lots of cleanup time, which may prove to lose what should otherwise have been gained. Having a formal collaboration mechanism and work-in-progress version-control system breaks those problems down,” says Max Clemons, an application engineer at Altium.

“Hardware development follows specific rules and sequences to produce high-quality, stable products in the quantity you need,” agrees Lucas Wang, CEO of HWTrek, another company founded to develop software for hardware collaborators. “There are several steps you can’t skip or detour before shipping a product.” International collaboration using mainstream tools can cause particular challenges, says Wang, giving the example that “Google Docs doesn’t function well in China, and there’s a version-control issue.”

Part of the challenge is a lack of domain knowledge, adds Wang: “Large buyers like Dell and HP know how to work with larger manufacturers like Foxconn and have project managers to handle communication, scheduling, and following details. But many hardware developers today are small start-ups, working on smaller projects—and don’t have the in-depth knowledge of manufacturing, logistics, or other details involved in producing hardware.”

To address this, HWTrek has been developing HWTrek Project Development Hub (PDH), a software-as-a-service tool to guide hardware product development from build to delivery. “PDH incorporates a lot of data, like hardware certification information and [step-by-step] schedules” that help get projects ready for manufacturers, says Wang.

Adam Kell, founder of FlameStower, a company that makes a gadget that can recharge USB devices by tapping heat from campfires, began using PDH after having difficulties getting the company’s recharger built. He says, “Our main office is in San Francisco, our sales office is in Boulder, Colo., and our contract manufacturers are in Shenzhen, China.... One of the main pain points we had when working with our initial manufacturers was communicating when one of the team members wasn’t on the ground in China.” Kell adds that PDH is improving communication and scheduling among the involved parties. “Skype is helpful, but having a higher-level schedule to guide the progress of deliverables makes a much bigger difference.”

This article originally appeared in print as “Remote-Collaboration Software for Engineers.”

Daniel Dern is a Boston-based technology and business writer. His last article for IEEE Spectrum was about next-generation KVM switches.