Stay ahead of the latest technology trends. Become an IEEE member.

This article is for IEEE members only. Join the world’s largest professional organization devoted to engineering and applied sciences and get access to all of Spectrum’s articles, podcasts, and special reports. Learn more →

The processor that powered the original Macintosh, as well as the beloved Amiga computers

Motorola was late to the 16-bit microprocessor party, so it decided to arrive in style. The hybrid 16-bit/32-bit MC68000 packed in 68,000 transistors, more than double the number of Intel’s 8086. Internally it was a 32-⁠bit processor, but a 32-bit address and/or data bus would have made it prohibitively expensive, so the 68000 used 24-bit address and 16-bit data lines. The 68000 seems to have been the last major processor designed using pencil and paper. “I circulated reduced-size copies of flowcharts, execution-unit resources, decoders, and control logic to other project members,” says Nick Tredennick, who designed the 68000’s logic. The copies were small and difficult to read, and his bleary-eyed colleagues eventually found a way to make that clear. “One day I came into my office to find a credit-card-size copy of the flowcharts sitting on my desk,” Tredennick recalls. The 68000 found its way into all the early Macintosh computers, as well as the Amiga and the Atari ST. Big sales numbers came from embedded applications in laser printers, arcade games, and industrial controllers. But the 68000 was also the subject of one of history’s greatest near misses, right up there with Pete Best losing his spot as a drummer for the Beatles. IBM wanted to use the 68000 in its PC line, but the company went with Intel’s 8088 because, among other things, the 68000 was still relatively scarce. As one observer later reflected, had Motorola prevailed, the Windows-Intel duopoly known as Wintel might have been Winola instead. 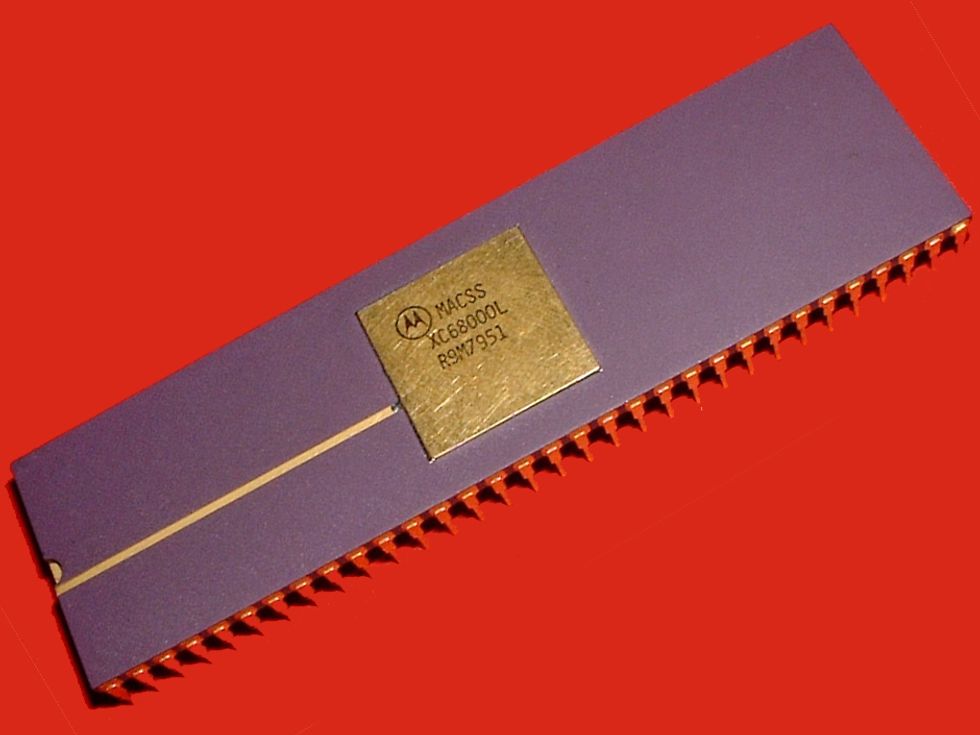 Underneath that gold cover is a 32-bit processor, but it’s connected to the outside world with a package that only had pins for 16-bit data.

Jay Last, a Father of Silicon Valley, Dies at 92

The Lies that Powered the Invention of Pong

How this gadget figured in the shady Rubicon spy case

The HX-63 cipher machine is an electromechanical, rotor-based system designed and built by Crypto AG.
The machine uses nine rotors [center right] to encrypt messages. A dual paper-tape printer is at the upper left.

Growing up in New York City, I always wanted to be a spy. But when I graduated from college in January 1968, the Cold War and Vietnam War were raging, and spying seemed like a risky career choice. So I became an electrical engineer, working on real-time spectrum analyzers for a U.S. defense contractor.

In 1976, during a visit to the Polish Army Museum in Warsaw, I saw an Enigma, the famous German World War II cipher machine. I was fascinated. Some years later, I had the good fortune of visiting the huge headquarters of the cipher machine company Crypto AG (CAG), in Steinhausen, Switzerland, and befriending a high-level cryptographer there. My friend gave me an internal history of the company written by its founder, Boris Hagelin. It mentioned a 1963 cipher machine, the HX-63.