Your Next T-Shirt Will Be Made by a Robot 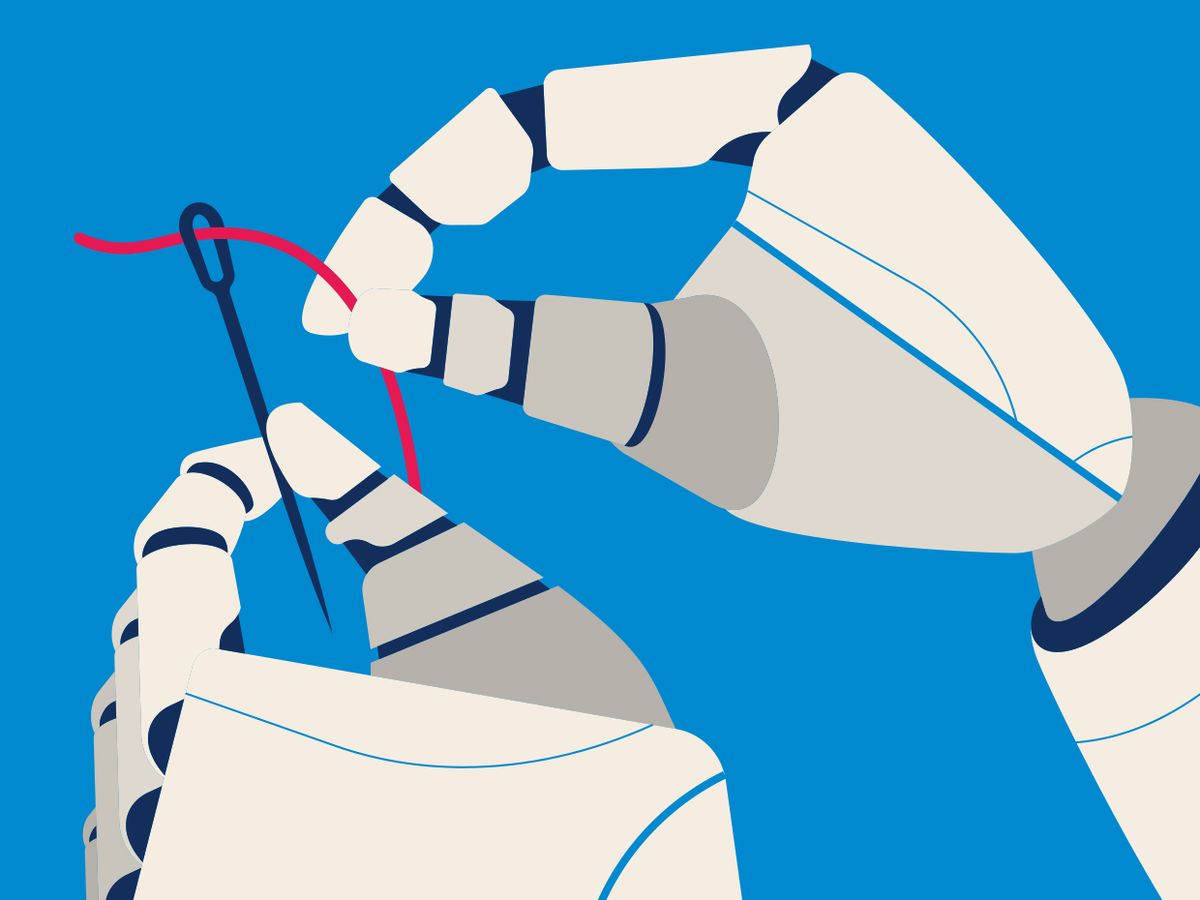 Sometime later this year, dozens of robots will spring into action at a new factory in Little Rock, Ark. The plant will not make cars or electronics, nor anything else that robots are already producing these days. Instead it will make T-shirts—lots of T-shirts. When fully operational, these sewing robots will churn them out at a dizzying rate of one every 22 seconds.

For decades, the automation of the sewing of garments has vexed roboticists. Conventional robots excel at manipulating rigid objects but are rather inept at handling soft, flexible materials like fabric. Early attempts to automate sewing included treating pieces of cloth with starch to temporarily make them stiff, allowing a robot to manipulate them as if they were steel sheets. This and other approaches, however, never became commercially viable, mainly because the clothing industry has resisted automation by relying on cheap labor in developing countries.

Now a Georgia Tech spin-off, SoftWear Automation, in Atlanta, claims to have built a practical sewing robot. And it doesn’t need starch. Rather, it’s based on a much higher-tech approach, one that combines machine vision and advanced manipulators. At the Arkansas factory, owned by Tianyuan Garments Co., one of China’s largest apparel manufacturers, SoftWear’s robots, called Sewbots, will equip 21 production lines, designed to make 23 million T-shirts per year for Adidas.

“Around the world, even the cheapest labor market can’t compete with us,” Tang Xinhong, chairman of Tianyuan, told China Daily last year, referring to the cost of producing each T-shirt, which he expected to be only 33 U.S. cents.

The fact that a Chinese company will use robots to make T-shirts in the United States appears to be a watershed moment for the clothing industry. Satyandra K. Gupta, director of the Center for Advanced Manufacturing at the University of Southern California, in Los Angeles, says sewing robots will ultimately allow factories to produce clothing not only faster and cheaper but with greater customization. “You’ll get clothes made based on your body size and fashion tastes,” he says. “This has potential to significantly change the industry.”

Today, if you walk into a garment factory, you’ll find workers performing almost every task required to make a piece of apparel. What happens when robots take over their labors? While some observers warn that millions risk losing their jobs, others argue that in the long term automation will decentralize manufacturing, creating new, better jobs in many more places.

“Our vision is that we should be able to manufacture clothing anywhere in the world and not rely on cheap labor and outsourcing,” says Palaniswamy “Raj” Rajan, the chairman and CEO of SoftWear, which has raised US $7.5 million from venture capital firm CTW Venture Partners. When manufacturers are located nearer their customers, he says, they can design and deliver new products faster and also reduce transportation and inventory costs.

But the changes won’t happen overnight. Automated sewing, despite the progress demonstrated by SoftWear and others, remains extremely challenging. Fabric comes in many different weights and textures, and handling such a wide variety is still tricky for robots. “Wherever there’s a need to manipulate fabric—for example, to load the sewing machine—then the human is still very much in play,” says David Bourne, a principal scientist at Carnegie Mellon University’s Robotics Institute who focuses on building intelligent systems for automated manufacturing. “The material-handling part of this whole thing is missing.”

The approach SoftWear came up with to solve this problem is rather ingenious. (The company has three issued patents and several more patent applications.) Instead of trying to manipulate a piece of fabric by keeping track of its overall dimensions—which is tricky because textiles stretch and deform—the company decided to track individual threads in the fabric. To do that, it developed a specialized camera capable of capturing more than 1,000 frames per second, and a set of image-processing algorithms to detect, on each frame, where the threads are.

At the same time, the company built robotic manipulators to mimic the way sewing-machine operators use their fingers to handle fabric. These micromanipulators, powered by precise linear actuators, can guide a piece of cloth through a sewing machine with submillimeter precision, correcting for distortions of the material.

In addition, SoftWear came up with two other systems to move fabric panels around: One is a four-axis robotic arm with a vacuum gripper that can pick up and place fabric items on the sewing table; the other is a 360-degree conveyor system that uses spherical rollers embedded on the table to slide and rotate the panels at high speed.

The company’s current Sewbots can make bath rugs, pillowcases, towels, and other products that are flat and mostly round or square in shape. Rajan, the CEO, says 2 million such products are already for sale at Target, Walmart, and other major retailers, and that before year-end “our robots will be making 30 million pieces a year.”

SoftWear is now improving its sewing robots for operation at the Tianyuan factory. Making a T-shirt is much more complicated than making a rug because a T-shirt requires multiple seams and hems that are not flat. If all goes as planned, the Sewbot will be able to carry out the same tasks that 10 workers currently perform, like sewing a sleeve or attaching a label, in a conventional production line—except the robot will be able to make the same T-shirt in about half the time.

After T-shirts, SoftWear wants to focus on jeans, dress shirts, and uniforms, which are even harder to make. Will robots eventually sew every piece of clothing we wear? No, Rajan says: “High fashion, bridal dresses, things like that—those are still going to be done by humans.” So for now it appears that “robot couture” will have to wait.