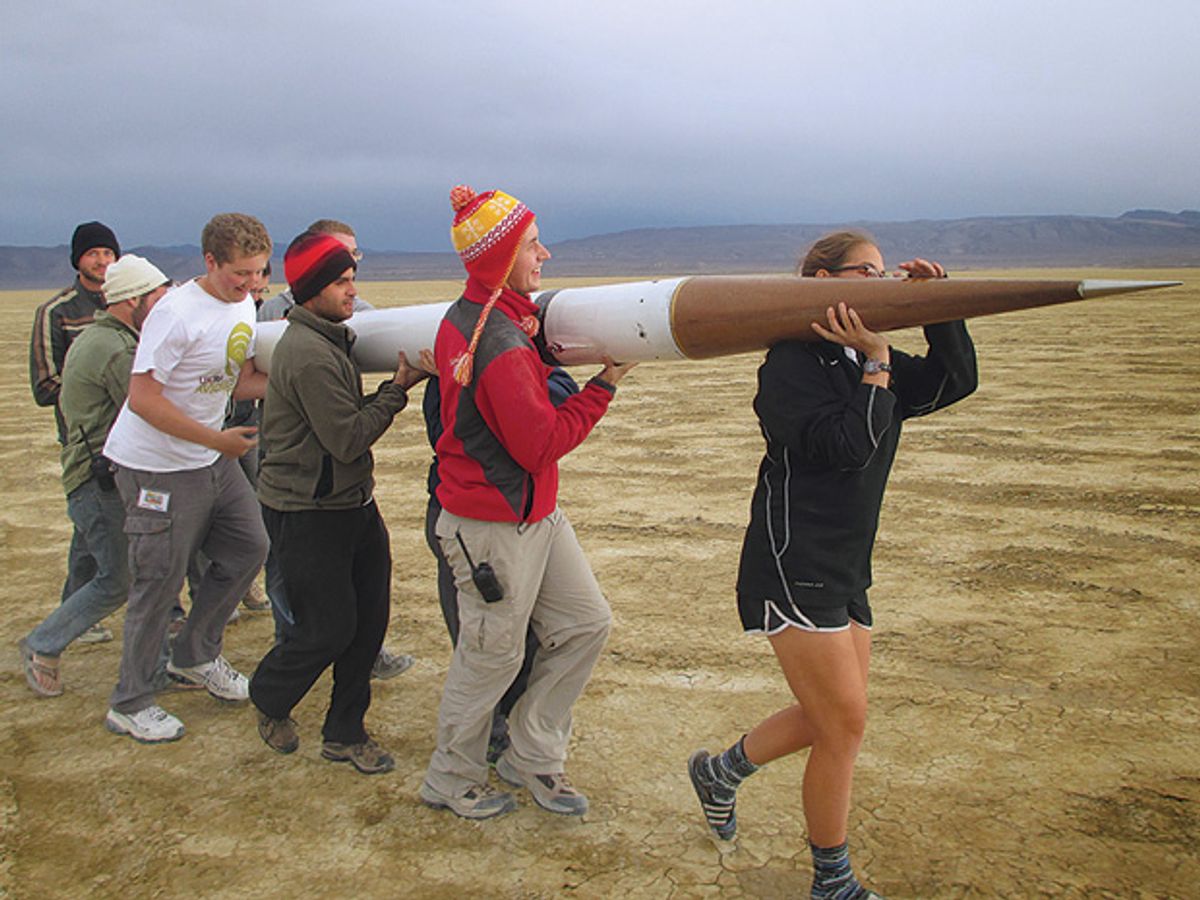 In September 2013, after two years of development, and a 10- to 12-hour drive from Los Angeles to Black Rock Desert in northern Nevada, some 50 members of the University of Southern California Rocket Propulsion Laboratory (RPL) launched Traveler, their 4-meter tall, 136-kilogram rocket, and held their breaths.

“We were really disappointed, but at the same time glad the rocket launched after two years in limbo and interested to find out what happened,” says Jason Silverman, a third-year astronautical engineering student. Turns out, parts of the solid-fuel propellant were improperly cast and started burning too soon, creating excessive pressure.

Despite the setback, these young men and women stand to become the first undergraduate students to design, build, and launch a rocket into space. Their goal is to reach 122 kilometers (space begins at 100 km). They’re experimenting with new propellant additives, redesigning the rocket motor, and eyeing a spring launch date.

The dream began in 2005 with RPL’s founder, then-undergraduate Ian Whittinghill. Now an aerospace engineer, he is currently the group’s industry advisor. Today, the lab is run by Silverman, along with fellow students Jordan Noone and Brandon Edelson. “It was one of the factors that made me want to come to USC,” says Silverman.

The lab’s mission is to give students experience in all aspects of rocketry, from design to launch. Newbies begin with menial tasks, like sanding (lots of it), and slowly increase their responsibilities according to interest, skill sets, and availability. There are roughly 15 very active members, and another 40 to 50 regular helpers. Silverman, Noone, and Edelson are there daily.

“After a few months, members can learn enough to build their own rockets and get certified by the Tripoli Rocketry Association. This qualifies them to fly bigger rockets and buy propellant,” says Silverman.

With the lab completely student-run, the team also learns more earthbound aspects of the job—like Federal Aviation Administration applications for launch approvals. With a university-funded annual budget of US $30 000 to $50 000, RPL relies heavily on industry donations of materials, often tapping lab alumni as liaisons.

“Last year, Boeing gave us a very generous donation of carbon fiber, which we use to make motor cases and fins,” says Silverman. “Companies often give us carbon fiber that is too old for them to use but good enough for us.”

“Running the lab is quite a bit like running a start-up,” adds Noone. “We have to go after our own funds and get our names out to companies.”

The Traveler rocket uses 96 kg of an ammonium perchlorate composite propellant, similar to the fuel that was used in the space shuttle’s boosters. The fuel is cast in the desired shape of the rocket motor, which takes hundreds of volunteer-hours.

Industry visitors often walk away impressed. Apollo 7 astronaut Walt Cunningham toured the lab before presenting Silverman with the prestigious Astronauts Scholarship Award in October. “It seemed like the students were really in charge of what was going on,” says Cunningham. “They’ll be well prepared to step out in the world around them and willing to live by those decisions.”

For those wanting to start similar labs at their universities, “you’d have a better chance of succeeding if members have done rocketry in the past,” Silverman advises. “Our founders already knew what they were doing. We also have good relationships with many aerospace companies.” Silverman acknowledges that those were easier to establish because of the concentration of such companies in Southern California.

By this time next year, the students hope to have made history. As Noone wrote in the flight report on the September launch: “We didn’t reach our end goal, but...no other group of students has gotten anywhere close…We had issues, and we’ll work through them and will be back soon enough.”

This article originally appeared in print as “The Young Rocketeers.”

JPL's Plan for the Next Mars Helicopter