Velodyne Says It's Got a "Breakthrough" in Solid State Lidar Design

The standard of automotive lidar is getting cheaper and more reliable 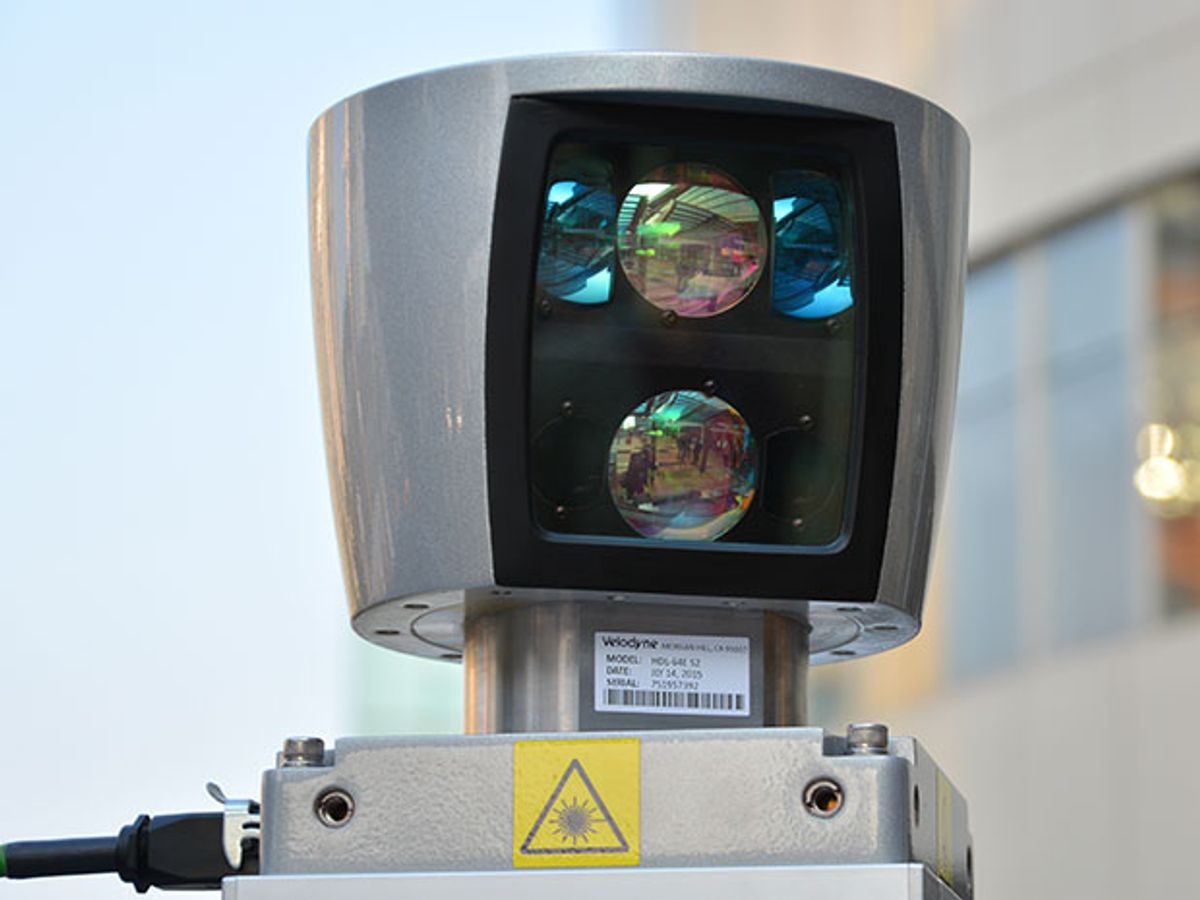 Lidar is a fantastic sensor for autonomous cars. Most companies developing self-driving vehicles seem to agree that the massive amount of long range, high accuracy data that you get from lidar is necessary, especially for complicated and variable urban environments. Really, the only reason why there's been so much focus on getting autonomy to work with just cameras and radar is that cameras and radar are cheap, and lidar is ridiculously expensive.

The reason that lidar is expensive is because it generally involves a bunch of high quality optical components (lasers, sensors, that sort of thing) all hooked up together inside of a housing that spins. Over the last year or two, however, we've seen some prototypes of solid state lidars—lidar sensors that take all of that bulky and costly hardware and squish it down onto one or two chips that can be mass produced for cheap. It's a technical challenge, but it's also a necessary inevitability for lidar in general, which is why it's exciting to hear that Velodyne is working on solid state lidar as well.

Velodyne makes automotive lidar systems for self-driving cars. They've been doing it pretty much since there were lidar system for self-driving cars, and due to the quality and performance of the sensors that they make, they have a virtual monopoly on the market right now. Look at any autonomous car, and you'll immediately recognize Velodyne's puck sensors, soda can sensors, and the beastly HDL-64. As awesome as these sensors are, they cost thousands (up into the high tens of thousands) of dollars, which puts them out of reach for any consumer automobiles.

Today, Velodyne is announcing a "a groundbreaking design for a solid-state lidar sensor that can deliver a subsystem cost of under $50 U.S. when sold in high-volume manufacturing scale." Here's the rest of the meat from the press release:

LiDAR sensors that leverage this new design will be less expensive, easier to integrate due to their smaller size, and more reliable as a result of fewer moving parts. The technology can also be integrated in Velodyne LiDAR’s existing Puck form factors.

As is usual with press releases, this doesn't give us a lot of detail about what Velodyne actually has going on right now, or what exactly their plans are, so last week we spoke with Anand Gopalan, vice president of Velodyne's R&D, for some extra info.

IEEE Spectrum: What are you announcing today?

Anand Gopalan: Our customers are going into production with our Puck sensors for the first generation of autonomous vehicles. What we're working on is how to make things better for the second generation, where you do need to worry about reliability and cost and power consumption.

The press release talks about an ASIC that functionally addresses one half of the lidar challenge, which is to transmit light, to send the light out in a narrow enough pulse that allows you to get the range and the resolution that you need. It forms the basis for us eventually being able to build the next wave of lidar.

What does this mean for the next generation of Veldyne’s lidar sensors?

As we move forward, I think the thought process is to build an engine that encompasses all the functionality of a lidar: the transmission and reception of light and the calculation of intensity and time of flight, all of that, in such a small form factor that now it can be used in a variety of different configurations. We're enabled to do that by the custom ASICs that we're building, so this will really pave the way for something non-rotating. What we really see in the lidar space is that there are different applications going from full autonomy to ADAS which require different form factors and different fields of view, so our goal is to be able to create a lidar engine that lends itself to all of the above.

Why is solid state so important for Velodyne? Is it reliability, or cost, or what?

Solid state is determined by this idea that you want to have something that is non-rotating, or has fewer moving parts. Naturally, that also means that you have a smaller field of view. It's a combination of what you need in terms of field of view, and what you can pay for in terms of cost. Today, you can take one of our sensors and spread it out and build a complete solid state solution, but the cost would be prohibitive. So, the idea is, you want to be able to build something that meets the needs for the specific field of view requirements, and do it at a reasonable cost, and we think we have the ability to do that. There is a path to getting a puck sensor down to a very competitive cost point as well, so when you talk about cost, you have to really take into account what you're trying to achieve with the sensor.

So at least in the short term, you don't see these non-rotating solid state sensors replacing the existing sensors that you have?

It's complementing and augmenting the existing sensors, as well as creating a new product that will be completely non-rotating.

If you want to achieve a high degree of autonomy, you need a sensor that has a 360 degree field of view, a long range, and high resolution. These are the three main metrics, because you want to be able to create a very accurate three dimensional map of the world around you. There's a different class of advanced driver assistance applications that require a narrower field of view. We want to address both of these markets, and we're doing that by going to solid state at the level of the engine of the lidar. In the case of the full autonomous market, we may take that engine, and put it into a rotating solution, whereas in the ADAS market, we may put it in a non-rotating solution.

Can you address the general approach that you're taking, from a more technical perspective?

The approach that we're taking is to marry a transmitter and receiver together at the subsystem level to maximize signal to noise ratio. The other thing that Velodyne realized a long time ago is that it's very difficult to see something that's very close to you as well as something that's very far away from you with equal levels of resolution and clarity. In order to do that, the approach that Velodyne takes is very different than the approaches that our competitors take, and we feel strongly that our approach is the only one that can work to solve that problem.

What are we looking at in this picture?

What you're seeing is the GaN integrated circuit that forms the heart of the solution that we're proposing. This is the chip that does the transmit function. It's not beamforming.

We of course asked Velodyne for any metrics or performance data (actual or targeted) related to the solid state lidar, and they told us that they’re not ready to share that info quite yet. We’ve got a meeting scheduled with Velodyne at CES next month, so we'll have an update for you in early January.

automotive sensors self driving optoelectronics lasers ASIC sensors Velodyne lidar self-driving cars autonomous vehicles solid state
Evan Ackerman
Evan Ackerman is a senior editor at IEEE Spectrum. Since 2007, he has written over 6,000 articles on robotics and technology. He has a degree in Martian geology and is excellent at playing bagpipes.
The Conversation (0)
Robotics Type News Topic