The hand-size unit will be demonstrated this summer, released in test quantities this year, and mass produced in 2018 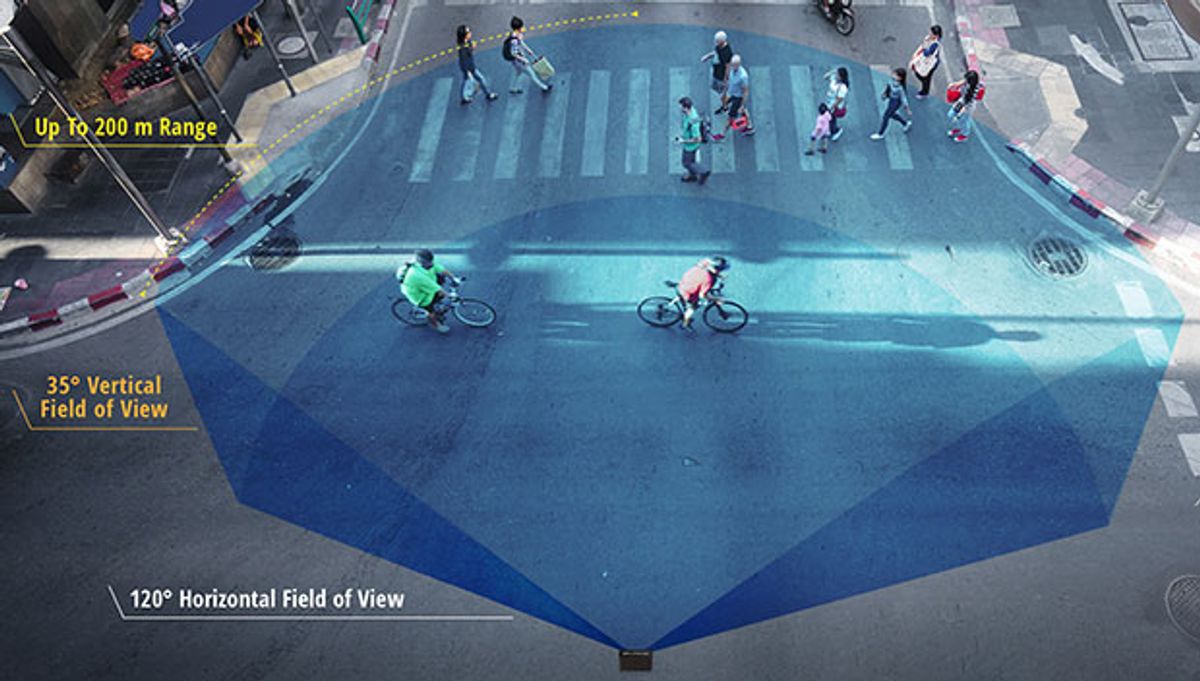 Velodyne today announced a solid-state automotive lidar ranging system that the company will demonstrate in a few months, release in test kits later this year, and mass produce at its new megafactory in San Jose, Calif., in 2018. The estimated price per unit is in the hundreds of dollars.

The company hopes to nail down the dominance it has enjoyed ever since pioneering automotive lidar a dozen years ago. That’s when its revolving arrays of lasers and optical sensors first appeared in rooftop towers on experimental self-driving vehicles, notably the Google car. Such arrays give 360-degree coverage and can see in detail what radar can only make out dimly, but they aren’t easy to build and calibrate in small, partially handmade batches. This is why their price still rises into the tens of thousands of dollars.

A solid-state version could be turned out in quantity for much less money, and in a smaller and more rugged package. That’s important for use in a production car meant to operate for years on end.

The Velodyne package measures 125 millimeters by 50 mm by 55 mm (about 5 by 2 by 2 inches)—small enough to be embedded into the front, sides, and corners of vehicles. Such a setup can give theater-in-the-round coverage even though each device covers only 120 degrees horizontally. They also span 35 degrees vertically, which comes in handy when climbing hills.

“I don’t necessarily believe that [the solid-state lidar] will obviate or replace the 360-degree units—it will be a complement,” Marty Neese, chief operating officer of Velodyne, told IEEE Spectrum earlier this month. “There’s a lot of learning yet to go by carmakers to incorporate lidar in a thoughtful way.”

Velodyne hopes to win the new phase of this game by being first to market. “The first mover sets the standard,” Neese said. “Software is 60 percent of the effort, so if you show up [later] with a new piece of hardware, it may not fit in.”

In lidar land, as on the larger self-driving continent, ambitious timetables are the rule. Velodyne’s rivals have cited even faster schedules. For instance, the startup Innoviz, in Israel, has promised to market a US $100 solid-state lidar by 2018.

Quanergy, one of the first solid-state lidar startups, perhaps poses the most immediate challenge to Velodyne. Unlike Velodyne, Quanergy has a manufacturing partner with plenty of experience with the automotive sector.

“This year is when we will be providing samples to the broader market—an announcement will be coming soon,” said Greg Noelte, Sensata’s global director for business development, in an interview earlier this month. “We’re targeting 2020–2022 for high-volume production.”

Noelte said that the key to winning the game would be in getting large numbers of units that meet tough automotive specifications and that Sensata’s many decades of experience in manufacturing gave it an edge. “It’s one thing to produce a few prototypes, another to produce one that can last 100,000 to 150,000 miles reliably,” he said. “Our specialty is in making it work, in process development.”

But Neese says lidar isn’t easy, and that Velodyne’s experience with the persnickety technology is what really matters.

“Don’t think of one guy at a bench [building a lidar set], think of a supply chain,” he says. “Imagine circuit board assemblies coming from completely automated factories, and laser boards, top and bottom assembly boards, all of it made in very capable factories with state-of-the-art automation. Lasers are similarly done in a very high-tech lab; it’s not trivial to make lasers.”