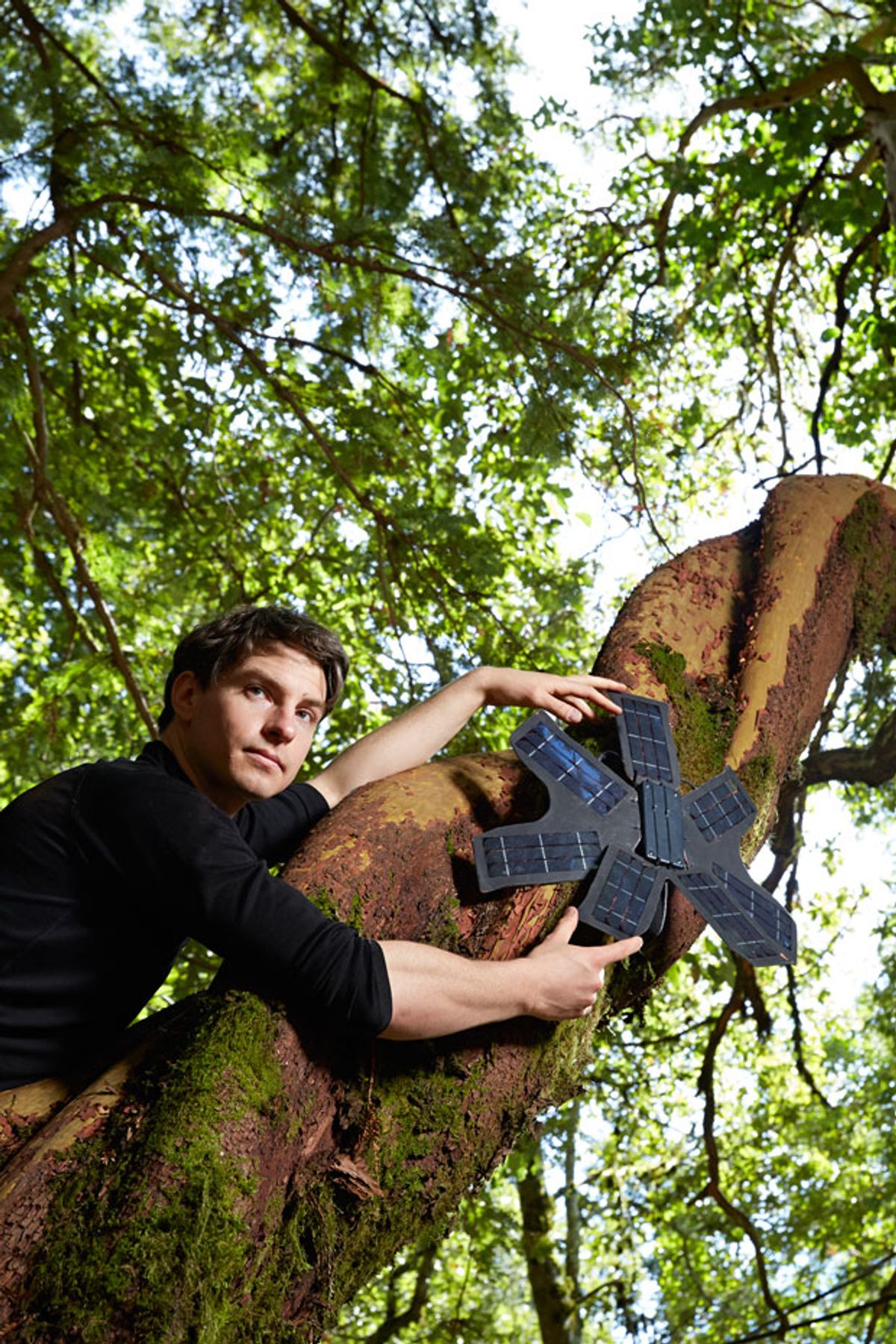 Topher White halted as he drew near the illegal logging camp. He could hear the chain saw rumbling just over the hill, and he suddenly realized how completely cut off this patch of Sumatra's rain forest really was. For the first time he wondered whether his plan to protect the world's forests using discarded cellphones was perhaps a little foolhardy.

White is not a violent person. Tall and fit, he is more comfortable channeling his restless energy into problems involving equations and code. And yet here he was, on a path he'd started down in 2011. Back then, White and his girlfriend (who's now his wife) were volunteering at an ape sanctuary in Indonesian Borneo, when they stumbled upon loggers illegally cutting a tree into two-by-fours. “We had been walking just 5 minutes from the rangers' station, and yet you couldn't hear the chain saw," White recalls.

An idea came to him: He could reprogram used cellphones to listen for the chain saws and motors and then send out alerts to the rangers, taking advantage of the site's surprisingly good cell coverage and using solar power to provide electricity.

Over the next four years, White overcame nearly all the many obstacles and complications to realize this seemingly simple solution. He's run trials of the system on the Indonesian island of Sumatra and, more recently, in Cameroon, and he is now moving forward with a number of deployments. Equally important, he's won the support of environmentalists and forest law-enforcement groups. Randy Hayes, founder of the Rainforest Action Network, calls White's system “a powerful tool that could do a lot of good on the planet."

White grew up tinkering. He got into computers early, learning the basics from his father, a computational physicist. Later, as a student at Kenyon College, in Ohio, he rebuilt the college radio station, which had fallen into disrepair.

After graduating with a B.A. in physics in 2004, he became Web chief for ITER, the international consortium that is building a nuclear fusion reactor in southern France. Neil Calder, White's boss at ITER, recalls that White was never fazed by obstacles: “If something came up, his instant reaction was, 'Oh, we can fix that,' and then he'd go on and do it."

In August 2011, after returning from the ape sanctuary, he started building a prototype of the rain-forest protection system on a workbench he set up in his bedroom. The following spring, he left ITER and moved to California to head up technical operations at a startup called Enthuse, which was creating a platform and apps for sports fans. After just a few months, however, his motivation began to wane. The mission of the startup kept changing, and he couldn't stop thinking about the system he had conceived in Borneo.

Hero Moment: He tackles the twin scourges of e-waste and deforestation with an alert system built from discarded cellphones.

By then, he'd come to truly appreciate the enormous environmental toll of deforestation. According to the United Nations Environmental Programme and Interpol, between 15 and 30 percent of wood traded on the global market is harvested illegally. In key tropical countries, illegal logging accounts for 50 to 90 percent of all forestry products on the market. “Deforestation accounts for more greenhouse gas than all the world's planes, trains, cars, trucks, and ships combined," White says. These statistics convinced him that his reconfigured, solar-powered cellphones could make a difference.

“Topher kept talking about doing it," recalls his wife, Amélie Olivier. Finally, at her urging, he quit Enthuse to focus full time on finishing the prototype and launching a nonprofit called the Rainforest Connection.

The system wasn't quite as easy to engineer as White had imagined. At first he tried reconfiguring an old iPhone, but that required too much modification, and so he switched to Android phones. To ensure that the listening software could run on any secondhand Android, he replaced the manufacturer's version of the operating system with CyanogenMod, a popular alternative. One thing he learned from the startup scene: Don't invent anything you don't have to.

He applied that rule whenever possible, but in some areas, invention was unavoidable. The acoustical-analysis software, for example, needed to run without human intervention, which ruled out existing products. Instead, White wrote scripts that scrutinized recorded sounds using Fourier transforms. A key insight came from an ornithologist who suggested looking at chain-saw harmonics, which White discovered easily stood out from the forest soundscape.

White had counted on using commercial solar panels, but he hadn't considered the diminished sunlight under the tree canopy. Diving into the scholarly literature, he found some papers from the 1950s and 1960s that mentioned sunflecks—transient spots of direct sunlight. “It turns out that 80 or 90 percent of the solar radiation that makes it through the canopy comes in the form of sunflecks," White says. Intrigued, he decided to design panels to harvest them.

D2solar, a solar-module prototyping firm in San Jose, Calif., helped White procure discarded strips of monocrystalline panels and cut them into petal-shaped patterns. Each petal consists of three 0.5-volt cells, wired in series, and seven petals are then wired to each device in parallel.

The configuration takes advantage of some basic circuit principles. When cells or panels are connected in series, the voltage is additive; the disadvantage is that if one cell or panel gets no sunlight, it can block current from the entire series. When the panels are connected in parallel, on the other hand, the current is additive, while the overall voltage corresponds to that of the lowest-voltage panel. In this configuration, if a panel is generating no electricity, it will not block current from the other panels. “The idea was to space the petals based on the average diameter of the sunfleck and to distribute them as widely as possible around the device so that at any given time there was a high probability that the sun would be striking all the cells on a petal," White explains.

“I was surprised that it worked," says Michael Rowell, who was working at D2solar as an R&D engineer at the time. “If you stick a normal solar panel in the jungle, it won't work no matter how big it is." White's solar flowers reliably generate 1.5 V, which he boosts to 5 V using a simple circuit.

After a successful test of the system in the Santa Cruz Mountains, White sought feedback from environmentalists. Their response was enthusiastic. “For the last few years, the main way to track illegal activities around deforestation was with satellites," says Rhett Butler, founder of Mongabay, an environmental news site. But the imagery needed to spot deforestation wasn't updated frequently, and it could take up to three months to reach people on the ground. “With Rainforest Connection, you can actually catch people while they are cutting down trees," Butler says.

Aurélien Brulé, founder of Kalaweit, the nonprofit that runs the ape sanctuary in Borneo, invited White to come test his system at another site in Sumatra. On the second day, while they were still installing panels and phones, the first alert came through. “We were taking a break, when my phone chimed that I had an e-mail," White says. The notification came from a device that had just been activated.

White, Brulé, and some employees from the preserve discussed how to respond. Three years earlier, Brulé and his wife had been attacked and beaten by loggers; still, they decided to confront the crew. This time, however, there was no violence. One of the sanctuary workers recognized an acquaintance among the loggers. There was an amicable discussion, and the loggers left. What's more, they continued to stay away after the pilot program ended a few months later. The devices operated for about a year; they could detect sounds up to a kilometer away, so each phone can monitor about 300 hectares.

Word of the successful test spread quickly among the conservation community, helped in part by a Kickstarter campaign that raised US $167,000 last July. A few months later, Rainforest Connection, with the Zoological Society of London, announced a second trial, in Cameroon, where they are sending alerts to more than four dozen rangers.

Another pilot program is scheduled to roll out later this year in the Brazilian Amazon. Working with the Equipe de Conservação da Amazônia, a public-interest group focused on environmental conservation and strengthening indigenous communities, White's team will install Rainforest Connection devices to feed real-time information to the Tembé, an indigenous community that is fighting to protect 600,000 hectares in the northeastern Amazon.

To have a real impact on deforestation, White knows he will have to expand far beyond these initial pilot programs and partnerships—and figure out how to operate in forests that lack terrestrial wireless networks. He also wants to broaden the scope of the project beyond catching criminals and begin addressing the loggers' underlying motivations. In Indonesia, he says, loggers cut down trees in part to pay for their cellphone service. White thinks one possible solution would be to arrange corporate-sponsored free cell service to those who agree to respond to alerts from Rainforest Connection; he's made some initial inquiries with telecom companies in Europe and South America.

First, though, there's a global network to be built and millions of hectares of forest to protect, one refurbished cellphone at a time.

An abridged version of this article appeared in print as “The Rain Forest's Defender."