Tracing the tortured legal trail of a simple smartphone patent 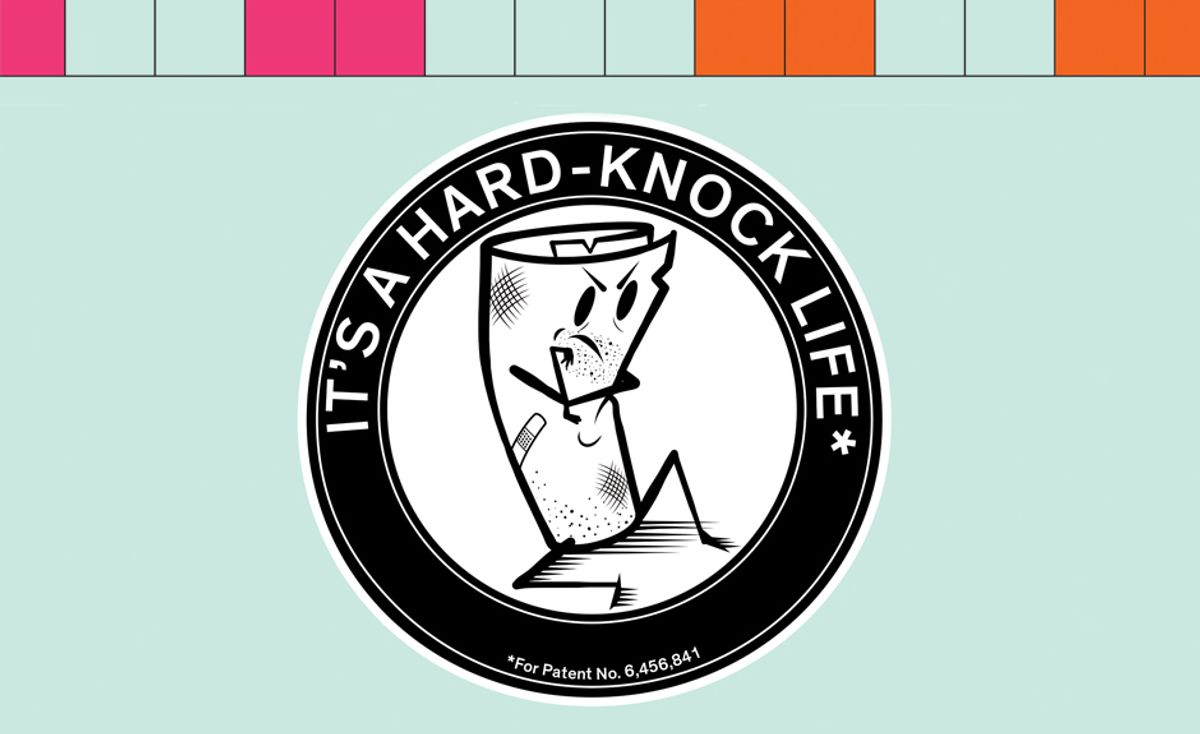 Takeshi Tomimori, an engineer at Mitsubishi Electric Corp., in Tokyo, had an idea. What if you could alert a cellphone user of incoming messages by displaying an icon on the screen? He worked out the details for what Mitsubishi’s lawyers called, in their 1999 filing, a “Mobile Communication Apparatus Notifying User of Reproduction Waiting Information Effectively.” Three years and three months later, the U.S. Patent and Trademark Office awarded Tomimori and his employer Patent No. 6,456,841. Let’s call it Icon, for short.

For nine years, Icon had a very quiet life—understandable, given that the cellphone wasn’t yet the ubiquitous gadget it is today. But think about Tomimori’s idea: Doesn’t it sound a little like the tiny numbers that show up on anyone’s text, e-mail, and social media icons when there are new messages?

Steven S. Rubin, a lawyer with Moritt Hock & Hamroff, says the Mitsubishi patent is actually more relevant to older cellphones. “This is going back to the flip-phone days, when a phone didn’t display anything until we opened it,” he says. Despite that key difference, in 2011 certain parties in the tech industry suddenly took an interest.

By then, the smartphone patent wars had reached a fever pitch. That year, Apple sued Samsung Electronics for smartphone-related patent and trademark infringement, and Samsung countersued. Apple and Motorola Mobility were embroiled in a similar globe-spanning legal battle; after Google bought Motorola Mobility for US $12.5 billion, the struggle became Apple v. Google. And when Google sought to buy Nortel Networks Corp.’s 6000-plus mobile-telecom patents, a consortium of Apple, EMC, Ericsson, Microsoft, Research In Motion, and Sony paid $4.5 billion to keep that intellectual property out of Google’s hands.

Against that litigious backdrop, on 4 March 2011, Apple quietly acquired Icon and 11 other Mitsubishi patents. (Presumably, Apple either paid the Japanese company for the portfolio or did an in‑kind exchange of IP, but neither firm would comment.)

Just five months later, Apple transferred those dozen patents to an entity called Cliff Island, a shell company created by Digitude Innovations. Headquartered in Alexandria, Va., Digitude describes itself as a patent acquisition and licensing company. Some IP experts, however, call it a patent troll, which to judge by its activities in this case, seems apt. Digitude was founded in early 2010 largely through a $50 million investment from Altitude Capital Partners, a private equity IP firm based in New York City. In November 2011, Icon and one other Mitsubishi patent (6,208,879—we’ll refer to it as Friend of Icon) were officially conveyed from Cliff Island to Digitude.

Throughout 2011, Digitude was busy acquiring hundreds of other patents through another shell company called Hupper Island. (Cliff and Hupper are the names of islands off the coast of Maine.) Most of those came from Adaptec, based in Milpitas, Calif., which was selling off its chip-related IP.

Finally, in December 2011, the goal of Digitude’s acquisitions became clear: It sued nine companies in the Federal District Court of Delaware for infringement of four mobile phone patents—Icon and Friend of Icon from the Mitsubishi deal and two from Adaptec (5,929,655 and 5,926,636). The two Adaptec patents aren’t obviously phone related. One is for a dual-purpose I/O circuit that can be implemented without taking up much real estate on a die. The other describes a way to make “remote procedural calls” over heterogeneous computer networks.

Digitude simultaneously filed a complaint alleging infringement of the same four patents with the U.S. International Trade Commission, a Commerce Department agency. Patent experts say the ITC is increasingly being used in this fashion [PDF]: Parties filing infringement lawsuits attempt to bolster their cases by also registering official complaints. This double-barreled approach pressures defendants to settle rather than fight on two fronts—in the courts and at the ITC.

The companies named in Digitude’s complaint were almost identical to those in the lawsuits: Amazon, HTC, LG, Motorola Mobility, Nokia, Research in Motion, Samsung, and Sony Ericsson. The list did not include Pantech—or Apple. (Digitude later amended its complaint [PDF] to include Pantech.) In the ITC complaint, Digitude sought an exclusion order to stop the importation of the infringing devices into the United States. The ITC tends to move faster than the district courts, says Rubin of Moritt Hock & Hamroff. It’s much more difficult to get a district court to issue such an injunction.

While some IP cases drag on for years, this one wrapped up quickly. Digitude dropped the lawsuits in May 2012 and the ITC complaints the following month. Behind the scenes, it had agreed to sell the four patents, along with more than 500 others, to RPX Corp. for $45.8 million. RPX is what’s known as a defensive patent aggregator, meaning it buys up patents in an effort to keep them out of the hands of patent trolls and to protect its clients, which include HTC, LG, Pantech, Samsung, and Sony. Other defendants in the case, not to mention other big consumer electronics companies like Apple, may also be among its clients; the company does not disclose the names of all its customers.

According to RPX’s August 2012 10-Q filing with the U.S. Securities and Exchange Commission, the company and 11 of its customers reached agreements in March of that year with Digitude; a Digitude subsidiary called Preservation Technologies; Robert Kramer (chairman of Digitude and managing partner of Altitude Capital); and his wife, Susan Kramer. The agreements granted RPX the 500-plus patents and “all of the issued and outstanding membership interests” in Altitude Capital.

In a written statement to IEEE Spectrum, RPX said the following: “The outcome of the deal is that we created immediate savings and value for our client network by removing a key patent portfolio and mitigating future activity of a highly successful non-practicing entity”—or NPE, a term some in the industry apply to patent trolls. RPX now employs Kramer as a consultant, the statement continues. “Kramer has been a leader in the space and we believe his market insights and NPE analysis expertise add value to our offering.”

In other words, RPX disarmed its opponent and is now free to use its ammunition. “That’s a nice, worthwhile purchase,” concludes Bruce Berman, CEO of Brody Berman Associates, an IP consulting firm. RPX’s general approach is efficient, he adds. “Many of the RPX members spend $1 billion or much more annually on R&D and $100 million or more on legal costs and filing and maintenance fees. For the $5 million fee to join RPX, they are in a better position to mitigate some NPE risks and, best of all, share in the cost of doing so. I would say that’s money well spent.”

And so for now, Icon—good old patent 6,456,841—resides with RPX. But at some point it could be on the move again, says Rob Aronoff, founder of Pluritas, an IP advisory firm. Most likely, he says, the deal requires RPX to hold the patents for a certain period of time, after which the 11 companies named in the deal may have the right to buy whatever patents they want. “It’s likely that these patents will end up in the hands of an individual RPX member,” he says.

If there’s an upside to this story, it’s that very few patents ever take such a perilous journey. An invention is born, an application is filed, a patent is awarded, nobody except the inventor ever notices, and then the patent dies a quiet death 20 years later.

“Probably 97 percent of the patents out there are of no value,” says Berman. “The life of most patents is not very interesting.”

Tam Harbert is a freelance journalist based in Washington, D.C., who specializes in technology and business. Over the past 20 years, she has watched patents become both valuable assets and strategic weapons for companies. “Despite the debate about so-called patent trolls, many companies trade patents behind the scenes with those very trolls,” she notes. “Everyone’s goal is the same: to make as much money as they can from their patents.” She wishes she could do something similarly lucrative with her copyrighted works.

Freelance journalist Tam Harbert has covered technology and business for more than 20 years. Based in Washington, D.C., Harbert says her favorite type of article explains how public policy affects the technology business, or vice versa. She has launched, edited, and written for publications targeting engineers, IT managers, investors, and corporate executives. Harbert has won more than a dozen awards for her work, most recently two awards (2014) from the American Society of Business Publication Editors (ASBPE) and the American Society of Journalists and Authors (ASJA). She has also received the Jesse H. Neal Award for op-ed writing.