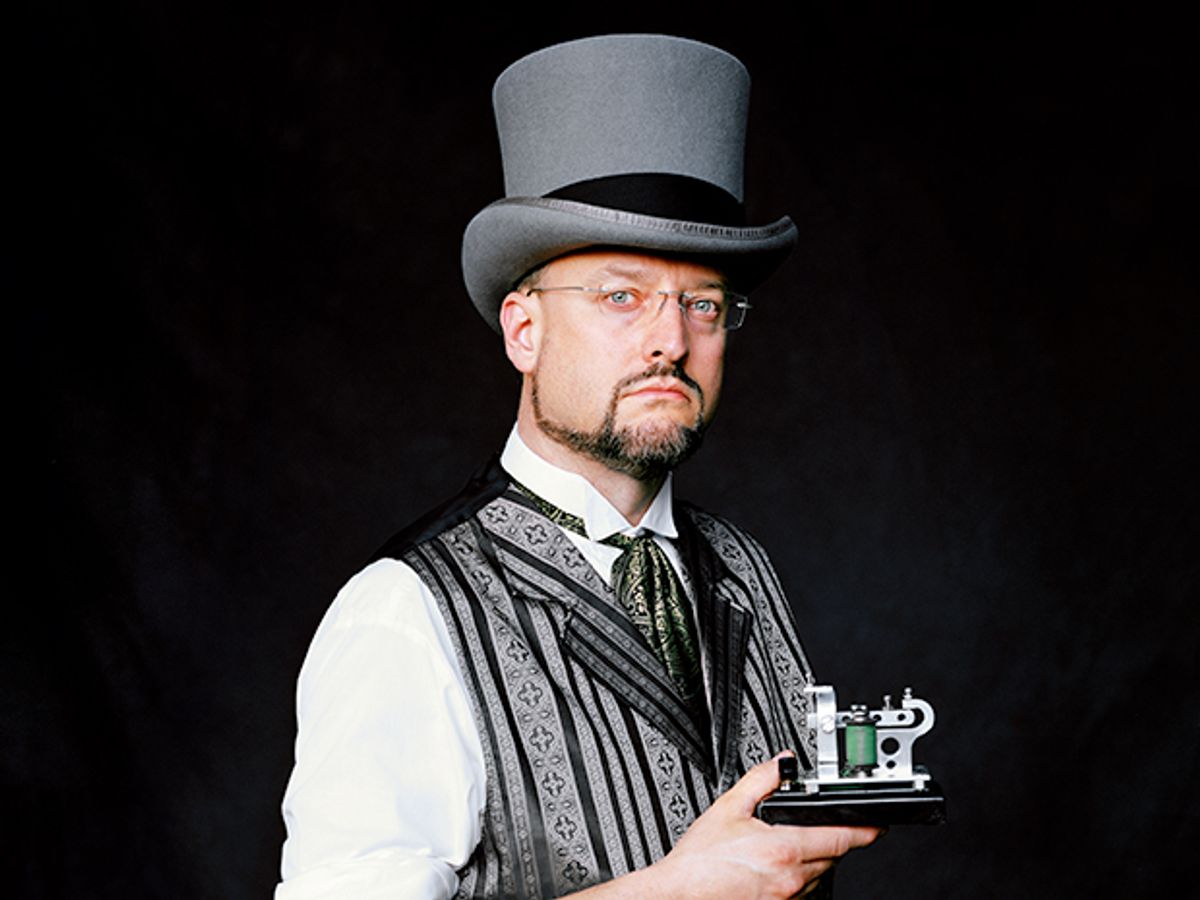 Sean Slattery puts on his goggles and starts up the engine of his Frankenstein’s monster of a car, its fiberglass body imitating that of a 1929 Mercedes SSK, its chassis taken from a 1972 Volkswagen Beetle. He bought it on eBay for US $1500, and after major repairs he is now ready to add his own hack. He plans to paint the machine black with gold filigree, mount brass headlights and a slanted grille, and install a compact boiler to drive the vehicle with the fiery might of steam. Call it the Steampunk Car.

Steampunk is a burgeoning subculture that draws on the elaborate aesthetics and romantic worldview of 19th-century England to envision how things might have looked had a few key technologies been developed further. It conjures a gaslit cityscape filled with steam-powered robots, mechanical computers, ray-gun-toting aeronauts, and monocled mad scientists.

Steampunk diehards talk and dress as if they lived in such a world. Some stay in character all the time—whether at a steampunk gathering or the supermarket. Slattery, 46, takes things a bit more casually. Most of the time he’s a regular guy: a Linux system administrator, married, with two daughters. It’s when he walks into his garage, crammed with metalworking tools and hunks of brass he’s found at the town dump, that he becomes Jake von Slatt, proprietor of the Steampunk Workshop.

On a recent summer afternoon, he parks the Steampunk Car at his home in Littleton, Mass., and guides a visitor through the property. In the backyard sits a school bus converted into a fully equipped Victorian-style recreational vehicle. On his office desk, he keeps a brass-adorned PC “fit for the office of Queen Victoria herself.”

“I’ve always been fascinated at this blend of the old and the new,” he says, “particularly when there’s an element of anachronism—something out of time.”

Steampunk has its roots in the 1980s as a type of speculative fiction, its name a tongue-in-cheek derivation from another literary subgenre, cyberpunk. But in the past few years, the movement has been “steamrolling,” as Slattery puts it, with the emergence of steampunk fashion, music, and design.

Feeding this growth are the pipes of the Internet. If the computer hackers of the 1980s had hobbyist clubs, the steampunk community has Facebook, YouTube, and online forums like Brass Goggles, where they philosophize about their lifestyles, discuss novels like The Warlord of the Air (1971), by Michael Moorcock, and Lord Kelvin’s Machine (1992), by James Blaylock, and share photos of their handmade prop weapons (“This is Chekhov, the newest darling in my personal arsenal, a rotary-dial gun”).

“It’s about a society that is learning to bubble up on networks,” says sci-fi writer Bruce Sterling, coauthor with William Gibson of The Difference Engine, a 1990 novel that many steampunk fans cite as a big inspiration. “That’s the part that’s really weird and new and remarkable about steampunk—not the brass, top hats, and whalebone but that it’s digital and rootless and headless.”

“It’s part art and part just tinkering with stuff, trying to create something that no one has really tried to do before,” says I-Wei Huang, known as Crab Fu, an artist and animator based in Dixon, Calif., who has built a collection of steam-powered mechanical critters.

Another artist, Richard “Datamancer” Nagy, is even trying to make a living out of it. He recently relocated from New Jersey to California to be at the “fabrication headquarters of the U.S.,” he says. His most famous creations are a laptop computer disguised as a music box and retro-futuristic keyboards.

Von Slatt, Crab Fu, and Datamancer are among the most prolific steampunk contraptors. But they’re far from alone. Countless steampunk artifacts—a Jules Vernian water-cooled PC with brass pipes and a porthole, a time machine named Dihemispheric Chronaether Agitator “capable of traveling forward in time at exactly 1 SPS [second per second]”—have appeared on the Internet. Jacob “Jake of All Trades” Hildebrandt, a student at Michigan Technological University, is currently building a steam-powered TV in his dorm room and documenting the process in his blog.

Recently, steampunk appears to have reached an ebullient point. Brass and clockwork items labeled “steampunk” are proliferating on eBay and Etsy. Already, there’s a steampunk interior design blog, a steampunk cookbook, and a soon-to-open steampunk boutique in New York City. Media coverage in outlets from The Wall Street Journal to Maxim Russia—and this magazine among them—have helped disseminate steampunk even further. It doesn’t come as a surprise that the result was a bit of a backlash.

One Polish steampunk purist took issue with those who think that “imitating 19th-century upper class is rebellious or revolutionary.” A poseur posted a mocking video—“Keep it brassy!”—on his blog. And Design Observer published a harsh critique by one Randy Nakamura, who called steampunk fabricators “mediocre hobbyists” and characterized the movement as “closer to Disney than punk or sci-fi.”

Steampunk fans regarded the criticism as pointless. What’s wrong, they asked, with some Victorian-era fans who enjoy building stuff, adding that the movement does strive to find a deeper ideology. “If you can imagine another world, it can allow you to creatively confront the challenges of the present,” says John “Manyjohns” Shamberg, a member of Kinetic Steam Works, a San Francisco Bay Area arts group, whose creations include a 10-meter-high steampunk tree house. “This is where steampunk gets its depth, by combining a recognition of a rather dystopic past/present with a utopic imperative.”

As steampunk grows, the discussion will probably continue. The question is how the movement can remain true to its DIY and anticonsumerist principles. Will steampunk evolve into something lasting—or will it disappear like thin vapor?

Back at the Steampunk Workshop, Slattery is not concerned about where things are heading. He’s having too much fun, he says, creating things and meeting like-minded people. For him, the challenge has been finding time for all his steampunk activities, which lately include finishing the steam-powered car, building a furnace that uses a BMW fuel injector to melt metal, and maybe steampunking a bulldozer he saw on Craigslist.

“My wife has been extremely tolerant,” he says, “even on a few occasions when I found myself signing e-mails to her as ‘Jake von Slatt.’ ”

Antique Artificer: California artist Richard “Datamancer” Nagy calls his latest creation the Archbishop [left], a Gothic-themed wooden frame with stained glass and brass embellishments that houses a high-powered PC and a liquid-crystal display. It comes with a brass keyboard [top], a drawing tablet disguised as an antique book, and a curious back story: in July, a 5.8-Richter-scale earthquake almost knocked the Archbishop to the ground, but Nagy jumped over a worktable and saved it. His steampunk portfolio also includes a handcrafted wooden case that looks like a Victorian music box but is actually a laptop computer [middle and bottom]. It has a copper keyboard, leather wrist pads, and a clock-winding key to boot it up.

Learn more about steampunk at Aether Emporium and Brass Goggles.

gadgets hardware type:feature type:cover art steampunk DIY STEAM
Erico Guizzo
Erico Guizzo is the digital product manager at IEEE Spectrum. An IEEE Member, he is an electrical engineer by training and has a master's degree in science writing from MIT.
The Conversation (0)
Type Analysis Topic Energy