The Scary Efficiency of Autonomous Intersections

A future without traffic lights is fast, efficient, and terrifying 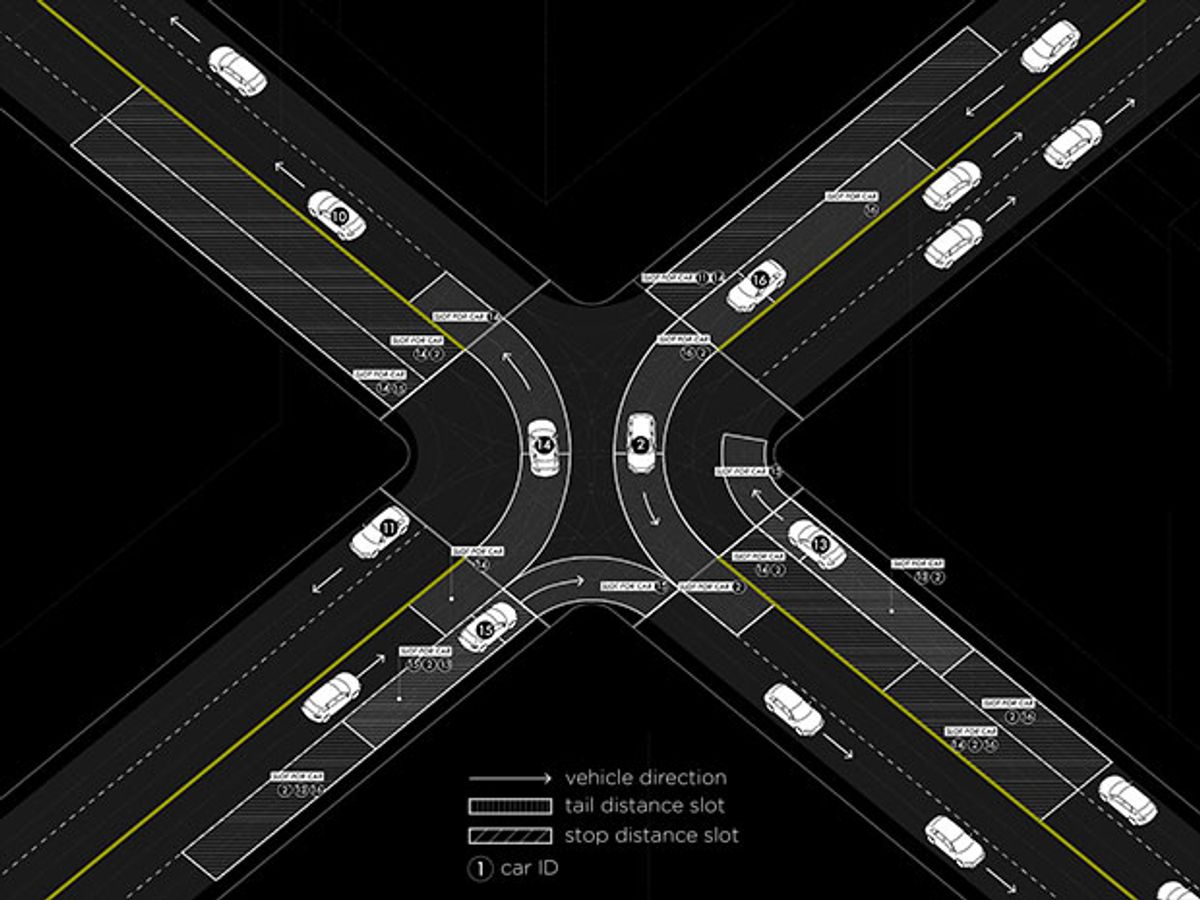 As you know if you've driven anywhere ever, traffic lights are part of a vast conspiracy designed to make it as difficult and time consuming as possible for you to get where you want to go. Lights change from green to red because someone might be coming from another direction, which isn't a very efficient way to run things, since you spend so much of your travel time either slowing down, speeding up, or stopped uselessly.

The only reason that we have to suffer through red lights is that humans in general aren't aware enough, quick enough, or kind enough to safely and reliably take turns through intersections at speed. Autonomous cars, which are far better at both driving and cooperating, don't need these restrictions. So, with a little bit of communication and coordination, they'll be able to blast through even the most complex intersections while barely slowing down.

These autonomous intersections are "slot-based," which means that they operate similarly to the way that air traffic control systems at airports coordinate landing aircraft. Air traffic controllers communicate with all incoming aircraft, and assign each one of them a specific place in the landing pattern. The individual aircraft speed up or slow down on their approach to the pattern, such that they enter it at the right time, in the right slot, and the overall pattern flows steadily. This is important, since fixed-wing aircraft tend to have trouble coming to a stop before landing.

The reason that we can't implement this system in cars is twofold: we don't have a centralized intersection control system to coordinate between vehicles, and vehicles (driven by humans) don't communicate their intentions in a reliable manner. But with autonomous cars, we could make this happen for real, and if we do, the advantages would be significant. Using a centralized intersection management and vehicle communication system, slot-based intersections like the one in the video above could significantly boost intersection efficiency. We've known this anecdotally for a while, but a new paper from researchers at MIT gives our hunches about the increase in efficiency empirical heft. The MIT team also suggests ways in which traffic flow through intersections like these could be optimized.

Rather than designing traffic management systems so that they prioritize vehicle arrival times on a first come, first served basis, the researchers suggest sending vehicles through in batches—especially as traffic gets heavier. This would involve a slight delay for individual vehicles (since they may have to coordinate with other vehicles to form a batch), but it's more efficient overall, since batches of cars can trade intersection time better than single vehicles can. The video above shows the batch method, while the video below (from 2012 research at UT Austin) shows a highly complex intersection with coordination of single cars rather than batches.

Simulations suggest that a slot-based system sending through groups of cars could double the capacity of an intersection, while also significantly reducing wait times. In the simplest case (an intersection of two single-lane roads), cars arriving at a rate of one every 3 seconds would experience an average delay of about 5 seconds if they had to wait for a traffic light to turn green. An autonomously controlled intersection would drop that wait time to less than a second. Not bad. But the control system really starts to show its worth as traffic increases. If a car arrives every 2.5 seconds, the average car will be delayed about 10 seconds by a traffic light, whereas the slot-based intersection would hold it up for a second and a half. And as the arriving cars start to overload the capacity of our little intersection at 1 car every 2 seconds, you'd be stuck there for 99 seconds (!) if there's a light, but delayed only 2.5 seconds under autonomous slot-based control.

We should point out that this only works if all of the cars traveling through the intersection are autonomous. One human trying to get through this delicately choreographed scrum would probably cause an enormous number of accidents due to both lack of coordination and unpredictability. For this reason, it seems likely that traffic lights aren't going to disappear until humans finally give up driving. An interim step, though, might be traffic lights that stay green (in all directions) as long as only autonomous cars are passing through them, reverting to a traditional (frustrating and inefficient, that is) state of operation when a human approaches.

The researchers point out that the advantages of slot-based control go beyond just saving time: they reduce fuel consumption, and along with it, the amount of carbon that would otherwise get pumped into the atmosphere by legions of cars idling at traffic lights.

It will take a lot of work to implement something like this. And because it's heavily dependent on having autonomous cars replace today’s human-controlled vehicles, let's hurry up and let the robots take over so that we can all benefit.

self driving efficiency MIT mit senseable city lab traffic lights intersections autonomous vehicles
Evan Ackerman
Evan Ackerman is a senior editor at IEEE Spectrum. Since 2007, he has written over 6,000 articles on robotics and technology. He has a degree in Martian geology and is excellent at playing bagpipes.
The Conversation (0)
Type Analysis Topic Energy