CREATE AN ACCOUNTSIGN IN
BiomedicalTopicTypeRoboticsNews

Last month, synthetic biologists atGinkgo Bioworks raised their glasses—filled with genetically modified beer—to cele­brate the launch of a new automated lab. By applying engineering principles to biology, and with the help of some nifty robotic equipment, Ginkgo has created a factory for churning out exotic life-forms, the likes of which have never before been seen on this planet.

The home brew they were drinking was an example of the potential applications of synthetic biology, a new field that builds on recent progress in genetic assembly methods. Scientists can now manufacture snippets of synthetic DNA and slip them into organisms, giving those critters strange capabilities. For example, the brewer’s yeast used to make the beer for the launch party had genes from an orange tree added to its own DNA. During the fermentation stage of the brewing process, those genes caused the yeast to produce ­valencene, an organic compound with a citrusy flavor. Speaking scientifically, it was delicious.

Ginkgo Bioworks, a hip young company based in Boston, recently raised US $100 million on the promise of finding many such useful applications for synthetic biology. It used some of that cash to build Bioworks2, the company’s vast new lab that uses robotic systems to form an assembly line for organisms.

Ginkgo needs to make microbes on a grand scale in order to find those that can function as tiny biological factories for its customers. Many of the altered organisms will be duds, but through highly organized trial and error, the bioengineers will eventually devise a microbe that turns out a desired substance—like a chemical ingredient used for perfumes, beverages, pesticides, or laundry detergents.

The company’s business model centers on the microbes themselves, not the end products. “We’re not in the business of manufacturing chemicals, flavors, or fragrances,” explains Ginkgo creative director Christina Agapakis. “We specialize in the organisms, and we partner with our customers, who will make the product.” Ginkgo licenses organisms to its customers, she says, and gets royalties if they’re used.

But building an organism to spec is no easy task. Genetics still isn’t well understood; there’s no universal catalog of genes that details each one’s characteristics. Even if researchers know what a particular gene does in an orange tree, for example, when they add it to a yeast cell, it might interact with the native DNA in unexpected ways. If they’re adding several genes from different species to that yeast cell, things get even more complicated.

That’s why Ginkgo takes an engineering approach to biology, applying a rigorous design-build-test cycle to the creation of living organisms. The new lab’s extreme automation is critical to this approach, says Patrick Boyle, ­Ginkgo’s head of organism design. “In grad school, I might have taken my five best ideas and tried them out,” Boyle says. “Here we take our 1,000 best ideas, try them all out, and see which works best.” 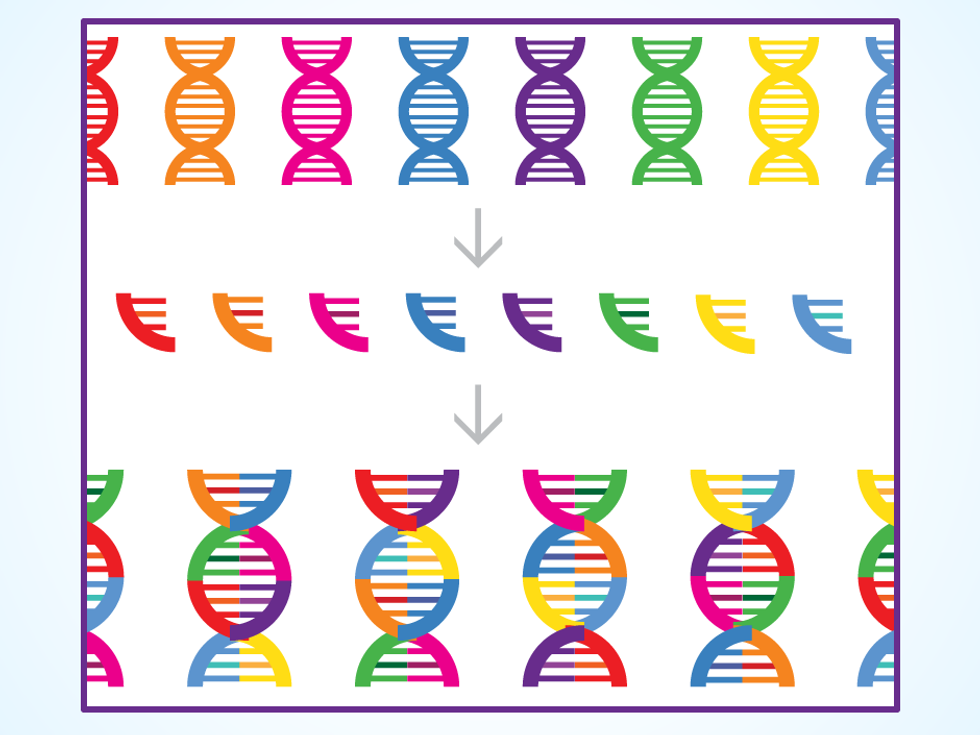 1: DESIGN Organism designers choose genes from a wide range of animals and plants and combine them in hundreds of different ways. Each mashup is a unique fragment of DNA.

To understand how this works in practice, take Ginkgo’s first efforts in the perfume business. The company is working with the French fragrance maker Robertet on a yeast that spits out rose oil, because extracting the substance from rose petals is expensive.

Design: Ginkgo designers search the scientific literature looking for genes that would cause the yeast to produce useful enzymes. The aim: When the designers feed sugar to the yeast, these enzymes should cause it to carry out chemical reactions that ultimately result in rose oil. But there is a dizzying array of genes and enzymes to consider. “If you have 100 possible enzymes that can serve as a step in a four-step pathway, that’s a lot of design space to explore,” Boyle says.

Build: Ginkgo outsources the actual manufacturing of synthetic DNA. When a batch of manufactured DNA arrives at Ginkgo, liquid-handling robots build the new organisms by adding the various snippets to yeast cells. “During my Ph.D., I spent a lot of time moving tiny amounts of fluid around,” says creative director Agapakis. “When we started Ginkgo, a lot of the robots looked like eight-armed grad students—there were a lot of pipettes.” The process has ramped up as these robots have gotten more capable. Ginkgo now has liquid-handling robots that quickly move nanoliters of fluid using targeted pulses of sound.

Test: Once the robots have created a thousand yeast variants containing different mashups of genes, it’s time to see if the cells are making their rose oil. Mass spectrometry machines crack open the cells and examine all the molecules inside, checking for the product and also determining whether the yeast is healthy. But success on both counts doesn’t necessarily mean the organism will meet the customer’s needs. Boyle says that in the case of rose oil, Gingko studies each yeast’s overall “fragrance profile.” While a cell may be making certain useful fragrance molecules, it may be making others that are not. “I like the fresh-baked-bread smell, but it’s not great when you’re trying to sell a perfume,” Boyle says.

Scale Up: Ginkgo adds one extra step to the typical engineering cycle, since a modified yeast cell that looks like a winner in the lab might not perform as well in the customer’s fermentation vats. In one corner of the lab, robotic systems fill and monitor rows of benchtop bioreactors, using a variety of sensors to watch the processes inside.

If even their best oil-producing yeast isn’t up to spec, the company’s organism designers go back to the drawing board, using the results of the experiment to inform their next 1,000 best guesses. One of these days, Ginkgo’s bioengineers say, they’ll make the perfect batch—one that comes out smelling like a rose.

Why Studying Bats Might Yield Insights into Human Life Extension

Restoring Hearing With Beams of Light

Human hearing depends on the cochlea, a snail-shaped structure in the inner ear. A new kind of cochlear implant for people with disabling hearing loss would use beams of light to stimulate the cochlear nerve.

There’s a popular misconception that cochlear implants restore natural hearing. In fact, these marvels of engineering give people a new kind of “electric hearing” that they must learn how to use.

Natural hearing results from vibrations hitting tiny structures called hair cells within the cochlea in the inner ear. A cochlear implant bypasses the damaged or dysfunctional parts of the ear and uses electrodes to directly stimulate the cochlear nerve, which sends signals to the brain. When my hearing-impaired patients have their cochlear implants turned on for the first time, they often report that voices sound flat and robotic and that background noises blur together and drown out voices. Although users can have many sessions with technicians to “tune” and adjust their implants’ settings to make sounds more pleasant and helpful, there’s a limit to what can be achieved with today’s technology.

Since optogenetic therapies are just beginning to be tested in clinical trials, there’s still some uncertainty about how best to make the technique work in humans. We’re still thinking about how to get the viral vector to deliver the necessary genes to the correct neurons in the cochlea. The viral vector we’ve used in experiments thus far, an adeno-associated virus, is a harmless virus that has already been approved for use in several gene therapies, and we’re using some genetic tricks and local administration to target cochlear neurons specifically. We’ve already begun gathering data about the stability of the optogenetically altered cells and whether they’ll need repeated injections of the channelrhodopsin genes to stay responsive to light.

Our roadmap to clinical trials is very ambitious. We’re working now to finalize and freeze the design of the device, and we have ongoing preclinical studies in animals to check for phototoxicity and prove the efficacy of the basic idea. We aim to begin our first-in-human study in 2026, in which we’ll find the safest dose for the gene therapy. We hope to launch a large phase 3 clinical trial in 2028 to collect data that we’ll use in submitting the device for regulatory approval, which we could win in the early 2030s.

We foresee a future in which beams of light can bring rich soundscapes to people with profound hearing loss or deafness. We hope that the optical cochlear implant will enable them to pick out voices in a busy meeting, appreciate the subtleties of their favorite songs, and take in the full spectrum of sound—from trilling birdsongs to booming bass notes. We think this technology has the potential to illuminate their auditory worlds.