After years of research, development, and debate, the USS Zumwalt, the first of a new class of high-tech destroyers, nears completion 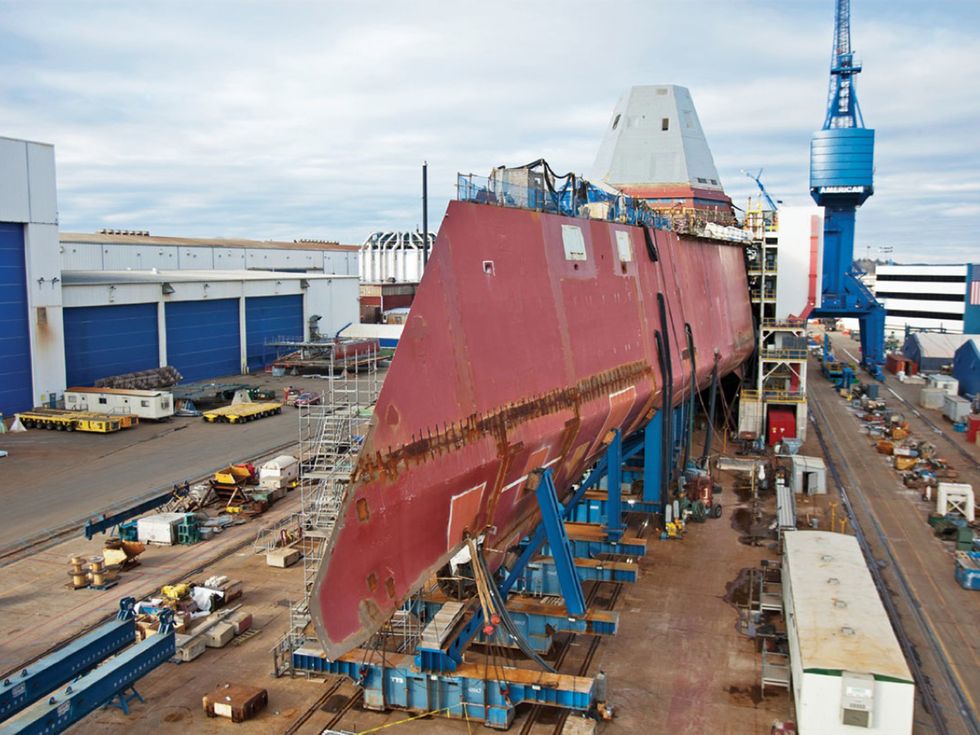 Two decades ago, the U.S. Navy began designing what it then called its “21st-century destroyers.” These were to be a fleet of 32 guided-missile destroyers that would be able to cruise near coastlines and attack forces on land with mind-boggling might. In 2001, though, the Navy canceled that program and replaced it with a less costly alternative.

It took another dozen years, but the first destroyer of that new generation is now nearing completion. Although less ambitious than the original concept, the first ship of this new class, the USS Zumwalt, is pioneering so many advanced technologies that some decision makers have criticized the program for trying to do too much, too soon.

Some of the pushback came simply from the enormous costs involved in developing so many cutting-edge technologies. Indeed, faced with mushrooming costs, the U.S. government reacted by repeatedly reducing the number of these destroyers to be built—eventually settling on just three ships. The total cost of the program, including R&D, that will result in those three ships is estimated to be US $22 billion, according to the Congressional Research Service [PDF]. Another point of intense debate was whether the main task envisioned for this ship—cruising in coastal waters while supporting military operations on nearby lands—was really so important to U.S. geopolitical interests.

And there has been no shortage of purely technical questions. Chief among them: Are the many advanced technologies slated for the Zumwalt really battle ready? It will probably be years before we’ll know for sure. But it’s not too soon to consider how these technologies will affect future naval warfare.

The U.S. Navy has not released details about the ship’s interior. But after gathering what information we could, including construction photos, we assembled the accompanying illustration. Together these visual elements offer what may be a preview of how warships will look for decades to come.

One of the most obvious differences between the Zumwalt and almost all other ships is its basic shape. The Zumwalt has what’s known as a tumblehome hull, which narrows rather than widens with height above the waterline. The rake of the bow is also inverted, making the ship look like an oddly angular submarine.

Tumblehome hulls haven’t been seen on naval ships in over a century. The U.S. Navy used it here because the inward-angled hull won’t reflect radar energy straight back to an adversary’s antennas. Its main disadvantage is instability: A tumblehome hull provides no additional righting force when the ship heels over, causing some naval architects to speculate that it could make the Zumwalt prone to capsizing in rough seas.

Another distinguishing feature of the Zumwalt is its deckhouse, which rises above the main deck and houses the bridge, the exhaust stacks, and various radar antennas. Like the hull, it was designed to reduce the ship’s radar profile and has sides that cant inward. Unlike the steel hull, the upper part of the deckhouse is made of balsawood-cored carbon-composite panels.

This material, highly unusual for a warship, was used to reduce weight up top (which aids stability), enhance corrosion resistance, and make the ship more stealthy. But it’s very expensive, and in January of this year the Navy began investigating using only steel for the deckhouse of the third and final ship of the Zumwalt class, the USS Lyndon B. Johnson.

Yet another departure from tradition is how the Zumwalt arranges its many missiles. Guided-missile destroyers of earlier design position their vertical missile-launcher tubes amidships, where they are best protected from enemy fire. The Zumwalt’s designers arrayed its missiles along the ship’s flanks, positioning them between inner and outer hulls. Putting them on the periphery does make the missiles more vulnerable to enemy fire, but it lessens the consequences should they be struck. Were that to happen, the resulting blast would explode outward, leaving intact the inner, watertight hull.

In another break from the U.S. Navy’s usual designs, the Zumwalt’s propellers and drive shafts are turned by electric motors, rather than being directly attached to combustion engines. Such electric-drive systems, while a rarity for the U.S. Navy, have long been standard on big ships. What’s new and different about the one on the Zumwalt is that it’s flexible enough to propel the ship, fire railguns or directed-energy weapons (should these eventually be deployed), or both at the same time. That’s because the 78 megawatts from its four gas-turbine generators can be directed through the ship’s power-distribution network wherever it’s needed. The presence of such a tightly integrated power-generation and distribution system has led some to call the Zumwalt the U.S. Navy’s first “all-electric ship.”

While the general idea of using electric motors to propel the ship wasn’t particularly controversial, the choice of what kind of motors to use did not come easily. The leading idea at first was to use permanent-magnet motors, but these proved challenging to develop, and the Navy ultimately opted for two 34-MW induction motors instead.

It’s perhaps a bit ironic that, despite the many cutting-edge technologies it contains, the Zumwalt class was passed over for one of the Navy’s most technologically challenging missions of all: sea-based ballistic-missile defense [PDF], which has grown more important to the United States and its allies lately as more nations of concern attain nuclear and ballistic-missile capabilities. Instead, the Navy will build more destroyers of a more conventional type and outfit them with the radars and antiballistic missiles needed.

In a 2009 speech, Adm. Gary Roughhead, then Chief of Naval Operations, made his reasoning for this change clear. While he applauded the Zumwalt’s advanced technology and how the program was being run, he also repeated a truism that only the most naive engineers in attendance didn’t already know: “Technology does not always equate to relevant capability.”

This article originally appeared in print as “Clad in Controversy.”

Self-Driving Microscopes to Navigate the Nanoscale

Dan Garisto is a freelance science journalist who covers physics and other physical sciences. His work has appeared in Scientific American, Physics, Symmetry, Undark, and other outlets.

It's difficult to find an area of scientific research where deep learning isn't discussed as the next big thing. Claims abound: deep learning will spot cancers; it will unravel complex protein structures; it will reveal new exoplanets in previously-analyzed data; it will even discover a theory of everything. Knowing what's real and what's just hype isn't always easy.

One promising—perhaps even overlooked—area of research in which deep learning is likely to make its mark is microscopy. In spite of new discoveries, the underlying workflow of techniques such as scanning probe microscopy (SPM) and scanning transmission electron microscopy (STEM) has remained largely unchanged for decades. Skilled human operators must painstakingly set up, observe, and analyze samples. Deep learning has the potential to not only automate many of the tedious tasks, but also dramatically speed up the analysis time by homing in on microscopic features of interest.

It was transmitted through Radio Cental’s relay network

When the Radio Corporation of America was founded in 1919, one of its missions was to become the world’s leading radio communications company. Among RCA’s first steps was to build a center that would transmit international signals and telegraphic messages. In 1921 the company opened Radio Central, in Rocky Point on New York’s Long Island.

The transmitting facility was connected to a radiogram-receiving facility in Riverhead—about 24 kilometers away on Long Island—through a system of relays using existing telephone lines. The two locations worked with the Central Traffic Office in New York City to send and receive messages.

Fundamentals of radome and bumper measurements using the R&S QAR

Due to design challenges, radar sensors are usually hidden behind bumpers or emblems, which can influence how well the radar sensor can interpret the outgoing and incoming data. To test radome and bumper influence on radar sensors, this whitepaper examines how the R&S®QAR quality automotive radome tester can help. Register now and download our free whitepaper.

6G Is Years Away, but the Power Struggles Have Already Begun

Can This DIY Rocket Program Send an Astronaut to Space?

What Can the Metaverse Learn From Second Life?

Self-Driving Microscopes to Navigate the Nanoscale

The Hyperloop Is Hyper Old