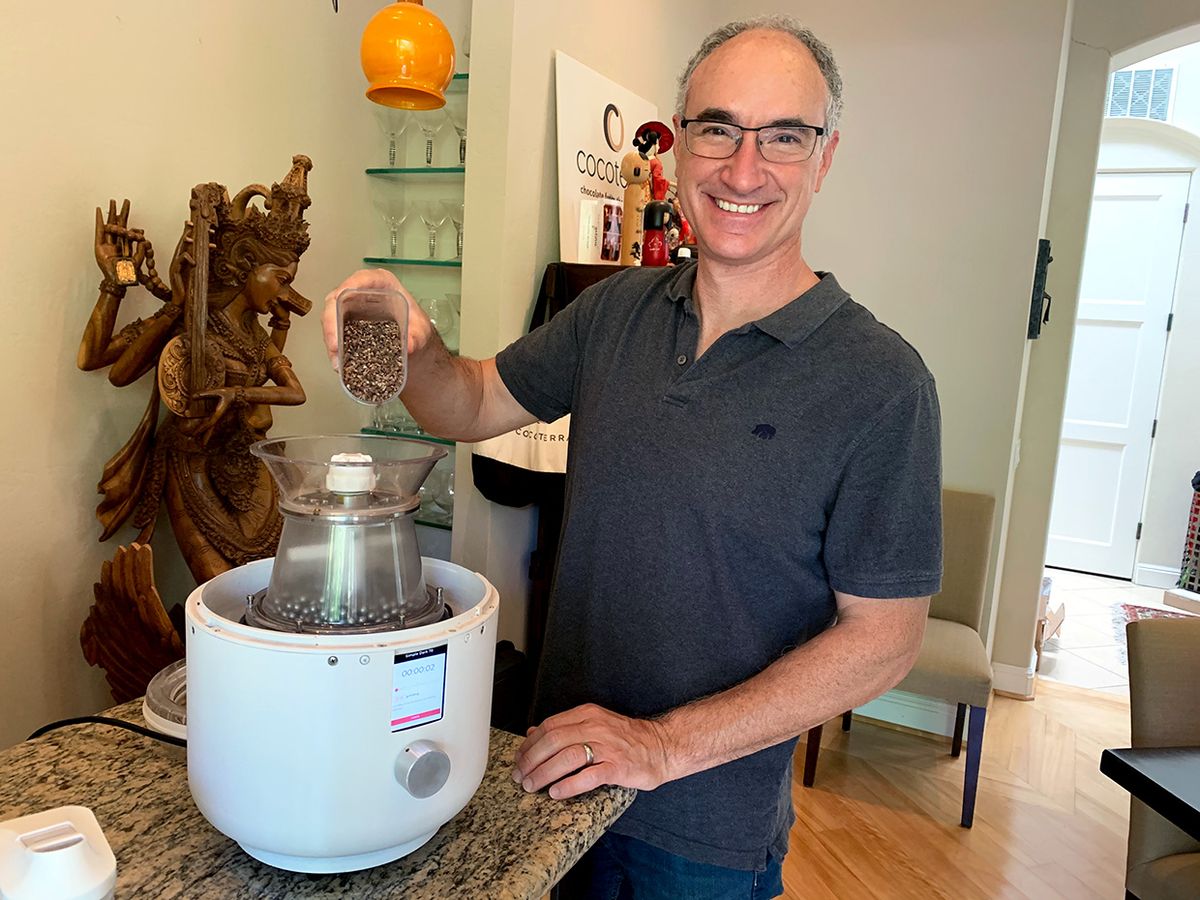 Five years and as many prototypes after starting his quest, Nate Saal aims to bring his smart, small, do-it-all chocolate machine to your countertop

With a rattle not unlike the sound of coffee beans being dumped into a grinder, Nate Saal pours a scoop of cocoa nibs into the top of the latest version of his chocolate making appliance. It takes up less than a square foot on the countertop, and fits easily under most cabinets.

It wasn't easy to shrink a chocolate factory into a small gadget. It's been more than five years since Saal made his first attempt, now sitting on the floor in front of the counter and began turning his quest into a company, now named CocoTerra and with several million dollars of angel investment behind it. Four more prototypes followed.

Starting a company wasn't new to Saal. After graduating with a degree in molecular biophysics and biochemistry from Yale, he became fascinating with the possibilities of the web, first joining Smart Valley, a non-profit aiming to increase access to Internet technology in 1994, then starting his first web-technology, CatchUP, an automated update system, two years later. He sold the company to CNET in 1999.

Next came GlooLabs, and a media streaming platform. Cisco purchased that company in 2007, adding the technology to a Linksys network storage device tagged the Media Hub. Then came Tactus Technology, a startup developing a touch-screen interface that used microfluidics to create a morphing keyboard with temporary raised buttons. In 2013, with funding dwindling and smart phone manufacturers committed to glass screens, he left that company.

What to do next?

The idea for a chocolate machine came during a visit from his brother-in-law. “He's in the coffee supply business," Saal said, “so I thought it would be nice to take him to a chocolate tasting; chocolate and coffee make a pretty good pair."

At the tasting, Saal recalls, they discovered similarities between the two industries: where the product is grown, that it is hand harvested, that they are both roasted. What was missing was the ability to make chocolate at home, without any expertise.

Saal wanted a device to let him do that, if it existed.

“People love to make what they love to eat," he says. “So you have ice cream makers and coffee makers and popcorn makers and pasta makers and bread machines, why not chocolate?"

If he couldn't find one, he thought, maybe he could build one. He decided that the starting ingredient would be nibs, cocoa beans that have been de-shelled and oven roasted, taking a page from gourmet coffee, which generally starts with roasted beans.

First to figure out: how to grind the nibs. Saal decided to use what is called a ball mill, that is, stainless steel balls tumbled by a motor. He chose this chaotic-motion grinding process, he says, for its efficiency, important for a process intended to operate quickly in a small device. Grinding the nibs releases the fat in the beans, Saal explained, which must be kept warm so that the chocolate doesn't solidify before the rest of the ingredients can be added.

Next came chocolate making's trickiest step: controlling the crystal formation through tempering. Cocoa butter can crystalize into six different structures, only one of which is desirable, so the temperature must be carefully controlled. For this, Saal settled on thermoelectric coolers, solid-state devices that get extremely cold on one side and hot on the other when a current runs through them.

Finally, he needed the machine to move the liquid chocolate into a mold. Commercial chocolate factories generally use pumps and dispensers for this. Saal, a beekeeper since high school, developed a centrifugal molding process, similar to that used to extract honey from honeycombs. This allows the machine to use the same motor to extract as it uses to grind, an advantage that overcomes the possible negative of a slight curve in the final bars.

That's the basic machine design. The whole thing can be controlled by buttons on the machine, or, more intuitively, by an app that includes preloaded recipes, taste quizzes to help users develop their own recipes, alerts indicating when ingredients like sugar and milk powder need to be added (the only part of the process that isn't automated), and status updates. This automation is essential to those new to chocolate making, Saal said, but he also left the option for more experienced makers to control many of the parameters directly. (Ultimately, the app will include a marketplace for cocoa nibs and other ingredients and a way of sharing recipes with other users. )

Saal says CocoTerra will ship products early in 2022; the company is now taking preorders at $799 and intends the initial sticker price to be $1199. He expects the price to come down with time to compete with other countertop appliances (a typical KitchenAid mixer, for example, retails at around $400. Cuisinart's Complete Chef, that cooks as well as chops, sells for around $600.)

While the hardware design has been basically complete since last year, ramping up to manufacturing hasn't been quick.

“This is something that hasn't been made before," he says. “It's a new category; there are no existing sub-assemblies we can leverage. We have to make it all, and it's a complex mechanical system." Unfortunately, the company missed a perfect marketing opportunity—the wave of home-made everything that hit with the stay-at-home orders of the pandemic.

And it was time to taste. I'm a dark chocolate fan, so was happy that Saal had selected a 70 percent cacao recipe, using nibs from Madagascar, for the demo. The result—creamy, chocolatey, slightly fruity (that's Madagascar's signature)—and good. Really good. Insanely good.

“That's because it's fresh," Saal explained. “Everything that people buy in the store has been there for weeks, at least. I don't want to hype it, but the experience of fresh chocolate—it's amazing."

What we didn't eat, Saal packed up for me to take home. Instead, I stopped to do a reality check with friends who are serious foodies, and chocolate is one of the foods they are serious about. Their verdict? “OMG, just, OMG."

Does Saal have another winning startup? He will start finding out early next year, when consumers can decide whether this gadget deserves a place on their countertops.