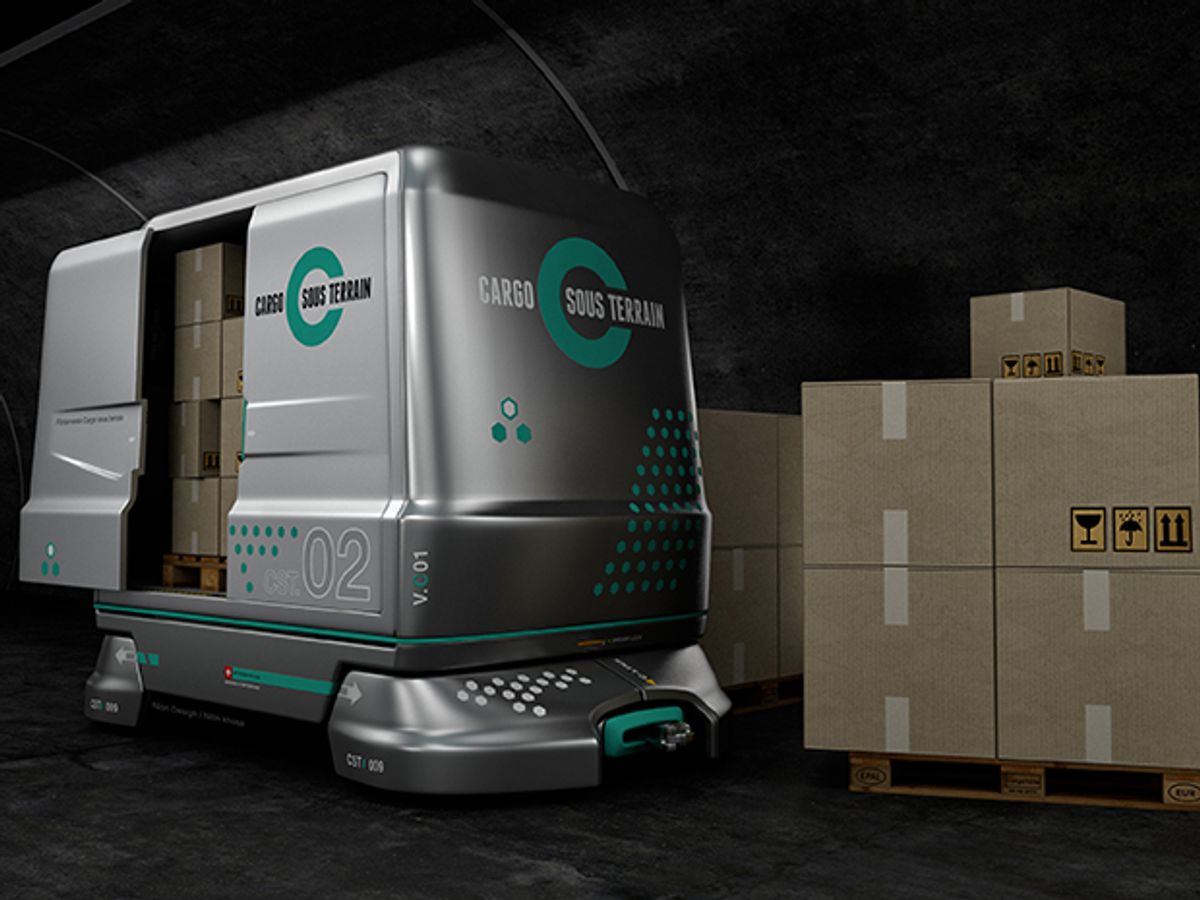 In the parts of the world where it seems that just about everyone has a car, we all want to get away from the crush of traffic. But after a certain point, traffic problems can’t be solved by building more roads. They’ll just generate more traffic, unless you do irritating things like charging money to use them. Switzerland, where the volume of road traffic directly related to the transport of goods is expected to increase by 45 percent over the next 15 years, lacks the infrastructure to handle that growth. So it’s in need of a creative solution, and fast.

One alternative is building an expensive transit option like rail lines. But Switzerland is considering a novel (and even more expensive) solution: a $3.4 billion underground cargo tube full of automated delivery carts.

Last week, Cargo Sous Terrain presented a feasibility study in Zurich detailing its plan for, uh, cargo sous terrain (underground cargo). The idea is to dig a 66.7-kilometer-long, 6-meter-wide tunnel 50 meters below ground. The thoroughfare would connect Zurich with logistics centers out to the west, south of Bern. The pilot tunnel would connect to four above-ground waystations that link the tunnel to cargo transfer points. The eventual goal is to expand the dedicated cargo network so that it connects Zurich with Lucerne and eventually Geneva.

The tunnel itself would contain three lanes for autonomous, inductively powered electric delivery truck-things as in the rendering above. The trucks would zip along at 30 kilometers per hour; above them, there would be a separate monorail system whisking smaller packages from Point A to Point B at 60 km/h. Power to run the underground parcel hauling system is supposed to come from renewables, including the energy collected by solar panels mounted on the roofs of the transfer stations.

Here's how it's all supposed to come together:

Part of the idea here is that you could replace big trucks with smaller vehicles that deliver things more frequently in urban areas (vans, cars, scooters, or eventually even small ground robots or delivery drones). Rather than getting one big delivery at the beginning of the day, businesses could depend on a constant trickle of goods, which would be more flexible. And you'd never see big trucks in urban areas at all, since they'd spend their time moving goods directly to the cargo transfer stations as opposed to businesses themselves.

The entire project will depend on private financing; but who’ll put up the money remains an unanswered question. $3.4 billion is, after all, kind of a lot of money. It's not too difficult to imagine that using the tunnel would save distributors enough time and money that it could pay for itself over time with delivery fees. But who’ll be willing to make such an enormous up-front investment on an unproven idea? This isn't the first time we've heard of schemes for underground cargo transport; none of the rest of them have panned out.

Even if funding were secured, the earliest we could expect to see the tunnel operational is 2030. By then, Switzerland’s national pastime could be sitting in traffic.

infrastructure tunnels switzerland trucks goods transport
Evan Ackerman
Evan Ackerman is a senior editor at IEEE Spectrum. Since 2007, he has written over 6,000 articles on robotics and technology. He has a degree in Martian geology and is excellent at playing bagpipes.
The Conversation (0)
Type Hands On Topic Biomedical

Mining Traffic Data for Insights About The Pandemic