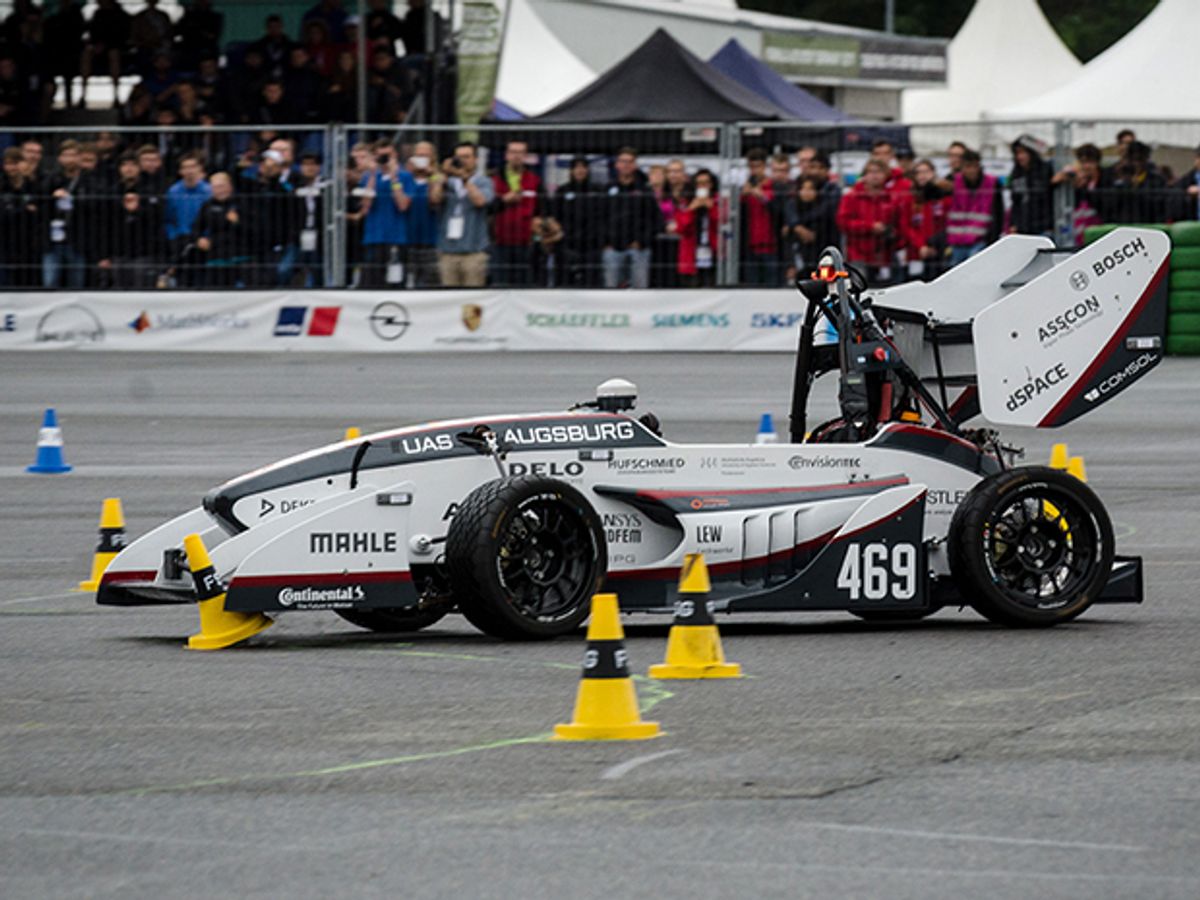 More than a dozen teams brought driverless cars to the Formula Student competition last week in Hockenheimring, Germany. It was the first event of its type, but many participants were diligent veterans of Formula Student Electric races and had tested their cars at different types of sites leading up to the main event. “We knew from the electric season that testing is really crucial,” says Manuel Dangel, vice-president of the Formula Student Driverless team at the Swiss Federal Institute of Technology (ETH) in Zurich. Then the rain started falling.

“We thought [our car] would basically fail,” Dangel says. While it had rained on one of their test days, their car’s main way of determining its own ground speed is an optical sensor optimized for dry ground. The team had not managed to complete a full ten-lap track drive in the rain.

“Driving under these weather conditions definitively was an even more challenging task for the teams,” says Steffen Hemer, a robotics graduate student at Technical University Kaiserslautern in Germany and a volunteer organizer of Formula Student Germany. At the request of the teams, organizers left more space between the racetrack and barriers at the race site.

The teams had to be careful, Dangel says, because they were re-using cars from the 2015 Formula Student Electric race and pushing them beyond their design lifespan. “We are basically building a prototype on top of a prototype, which is a really stupid idea, in general,” Dangel says.

Before the event, Hemer had predicted that the winning strategy would focus on driving “a safe line” more than speed, and that turned out to be true in several ways. Most of the driverless teams failed the so-called scrutineering round of the race, in which inspectors evaluate the vehicles for compliance with safety rules. A team last year set a battery pack—and their hotel—on fire, so Formula Student Germany officials this year tightened safety rules and enforcement.

All told, four of the fifteen driverless entries made it to the dynamic events. Since there were so few competitors, the organizers offered extra heats. Even then, the Zurich team was the only one able to complete all the required tasks. It beat the second-place team, Karlsruhe Institute of Technology, whose car froze partway through the track event, by a factor of two in the points competition. See this video compilation of the trackdrive events.

“Although there were a lot of difficulties…mainly related to the rain, we were still able to make it work which basically proves that we had enough backups or redundancies within the system,” Dangel says.

Robotic cars are also joining professional Formula racing (see “​Robot Cars to Join Formula E Series”) so it makes sense for the manufacturers that sponsor Formula Student events to encourage the next generation of engineers to try their hands at autonomous vehicles. Formula Student Driverless “addresses a whole new group of students, of different professions,”​ Hemer says. “It’s more into robotics, more into computer science, more into software engineering, data processing and planning and all that stuff which wasn’t that big in the previous cars.”