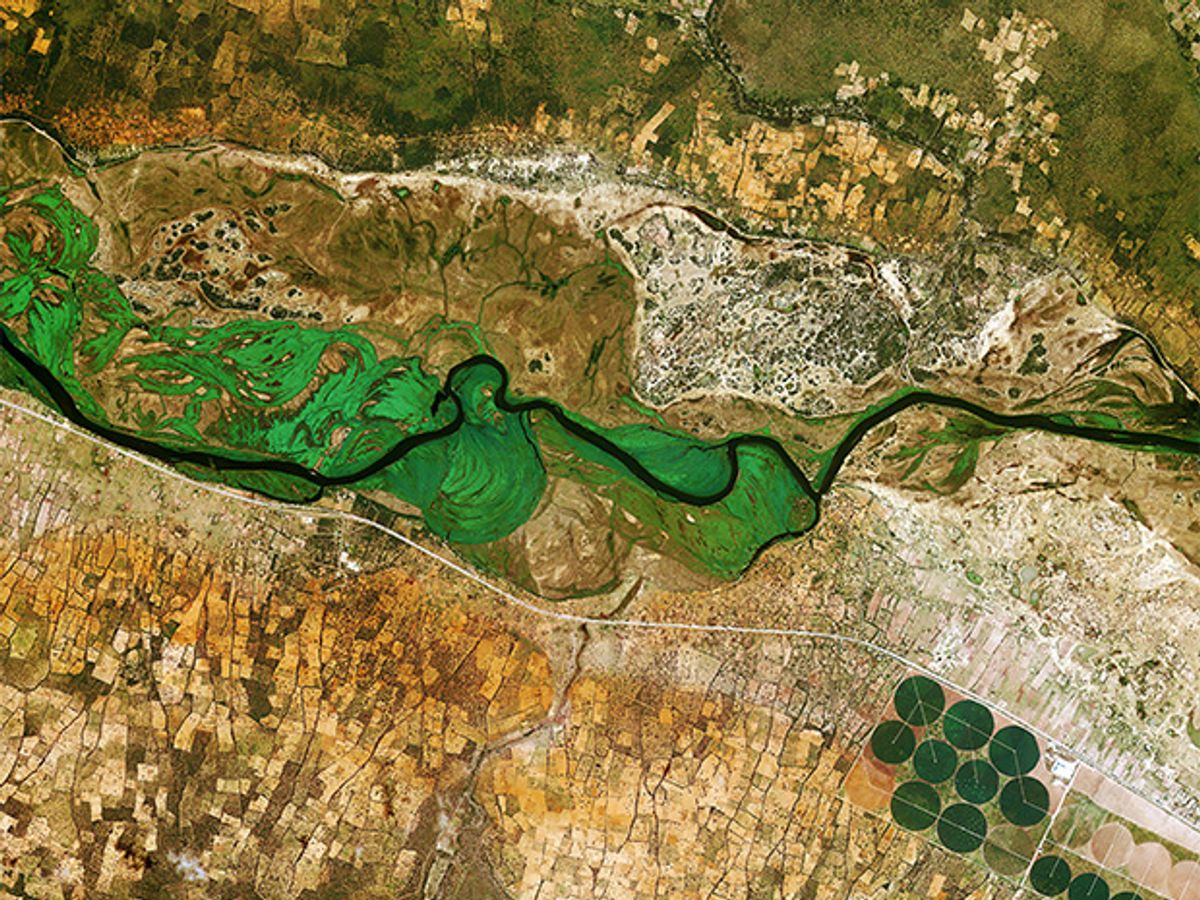 In 1971 and 1972, wheat crops in the Soviet Union suffered massive shortfalls. The U.S. government, which had no idea of the scope of the problem, blithely negotiated a three-year deal that allowed the Kremlin to buy U.S. grain on credit. The Soviets spent their entire credit limit (and more) right away, and global grain prices skyrocketed.

Just weeks after this grain deal was announced, the Earth-observing satellite Landsat 1 achieved orbit. If the satellite had launched a few months earlier, the so-called Great Grain Robbery might never have happened.

Remote sensing of the world’s agricultural output isn’t new, but improved software and sensors are raising this form of information gathering to new heights. Satellite data are now used not just to monitor crop yields but also to predict them weeks in advance. This helps traders in international markets set reasonable pricing. More important, it has the potential to drastically change how food shortages are dealt with in some of the poorer parts of the world.

“If you’re going to have a big shortfall in wheat production, for example, the earlier you know that, the better you can plan,” says Inbal Becker-Reshef, an assistant research professor in the department of geographical sciences at the University of Maryland. “If it’s a food-insecure location, can you mobilize food aid early enough to avert a [bad] situation?”

Becker-Reshef helped start the Group on Earth Observations Global Agricultural Monitoring (GEOGLAM), a G20 initiative aimed at timely dissemination of the most up-to-date information about agricultural production. She spoke last December at the American Geophysical Union’s meeting in San Francisco about one GEOGLAM effort, related to wheat-crop outputs.

Using a measure called the normalized difference vegetation index (NDVI), scientists managed to predict annual crop yields for wheat in Kansas six weeks in advance and to within 7 percent. Here’s why that’s impressive: The state’s annual wheat output [PDF] has bobbed up and down between 200 million and 500 million bushels over the past 20 years.

NDVI is measured using instrumentation on board NASA’s Terra satellite: specifically, spectral bands 1 and 2 (infrared to visible light) of the Moderate-resolution Imaging Spectroradiometer. NDVI compares the amount of light reflected in near-infrared with that reflected in visible light; if there is more infrared, the vegetation in that spot is likely to be dense and thus yield more of the crop. The new NDVI algorithm seems to work everywhere in the world—predictions came within 4 percent of the yield in Ukraine last year and within 6 percent for part of Pakistan. Again, country outputs can vary dramatically from year to year, so predictions within 10 percent are useful.

Satellites also play a big part in a program called FEWS NET—the Famine Early Warning Systems Network. Funded by the U.S. Agency for International Development, FEWS NET uses both on-the-ground monitors and remote sensing to try to predict and stave off food shortages around the world. Along with NDVI, FEWS NET uses remotely sensed estimates of rainfall as an indicator of crop performance and other data to predict food shortages.

“The major cause of food insecurity is the lack of rain,” says Glenn Bethel, an advisor on remote sensing to the U.S. Department of Agriculture. “The lack of good precipitation data hinders the accuracy of the crop models. [But] any crop can have optimal growing conditions and still fail. That is why we always need to monitor.”

Bethel says the workhorse of crop-condition assessment is the Terra satellite. With its polar orbit and 2330-km-wide field of view, it can see every point on the planet every one to two days. But this satellite is aging, having launched in 1999. And, Becker-Reshef says, data continuity is key when it comes to agricultural monitoring.

Patches of Production: Earth-observing satellites such as the Landsat series help predict agricultural output. Near San Luis, Argentina (above) and along the Okavango River (opposite) between Namibia and Angola, farms form a patchwork of productivity. Image: Science Source

Luckily, other satellites are ready to step in. Landsat 8, also known as the Landsat Data Continuity Mission, launched this past February. It joins an instrument called the visible infrared imager radiometer suite, which launched on board a satellite in 2011. And there are plans to combine Landsat 8’s data with similar observations collected from the soon-to-launch European Space Agency’s Sentinel-2. The two satellites can work together, and with some correction and calibration they could be used almost interchangeably.

Combining the satellites’ data is crucial, given their limitations. Landsat 8 will have a repeat cycle of 16 days, meaning it will view any given point on Earth less frequently than once every two weeks. Bethel says that isn’t enough for good monitoring, and Becker-Reshef agrees. If the Sentinel-2 data are mixed in, however, that repeat period will drop drastically, to about five days.

The extent of global communications in the 21st century may make a second Great Grain Robbery unlikely, but we are still a long way from perfect when it comes to understanding how the world’s crops are doing. Postharvest numbers on yields tend to take about six months to emerge in some countries, far too late to be of use for managing price volatility or preventing famine. The price spikes following droughts in 2008 and 2010 in Australia, Russia, the United States, and elsewhere are prime examples. “Whatever happens in the United States impacts what happens in Australia and impacts what happens in Brazil,” says Becker-Reshef. “Remote sensing is really the only option, and by far the most cost-effective option, for getting a global picture of what’s going on.”

This article originally appeared in print as “I Spy Thy Rye.”

Dave Levitan is a contributor to the Spectrum blog Energywise. In the May 2013 issue he reported on the growth of solar power in the Middle East.

Apple introduces another generation of OLED-only phones, potentially shutting out the flicker-sensitive

The new iPhone 13 in various colors.

Tim Cook is "so excited for iPhone 13." I'm not, because yet again, Apple's latest and greatest tech sits behind an OLED display. And OLEDs, for some of us, cause nausea, headaches, or worse. I explain why Apple's OLED displays, that dim by flickering on and off rather than by voltage adjustments, trigger health issues here.

The iPhone 13 series, launched Tuesday, has cool video features, like automatically changing focus on the fly. The phones have longer battery lives. They have better processors.

Designed to mitigate the worst effects of fires, fire retardant materials play a particularly important role in aircraft construction. Used in aircraft, epoxies and silicones must maintain their primary role as adhesives or coatings while exhibiting resistance to heat and flame in accordance with government and industry specifications.

Master Bond's series of flame retardant epoxies and silicones comply with specifications for flame resistance and reduction of smoke density and toxic emissions.

The Surprising Story of the First Microprocessors