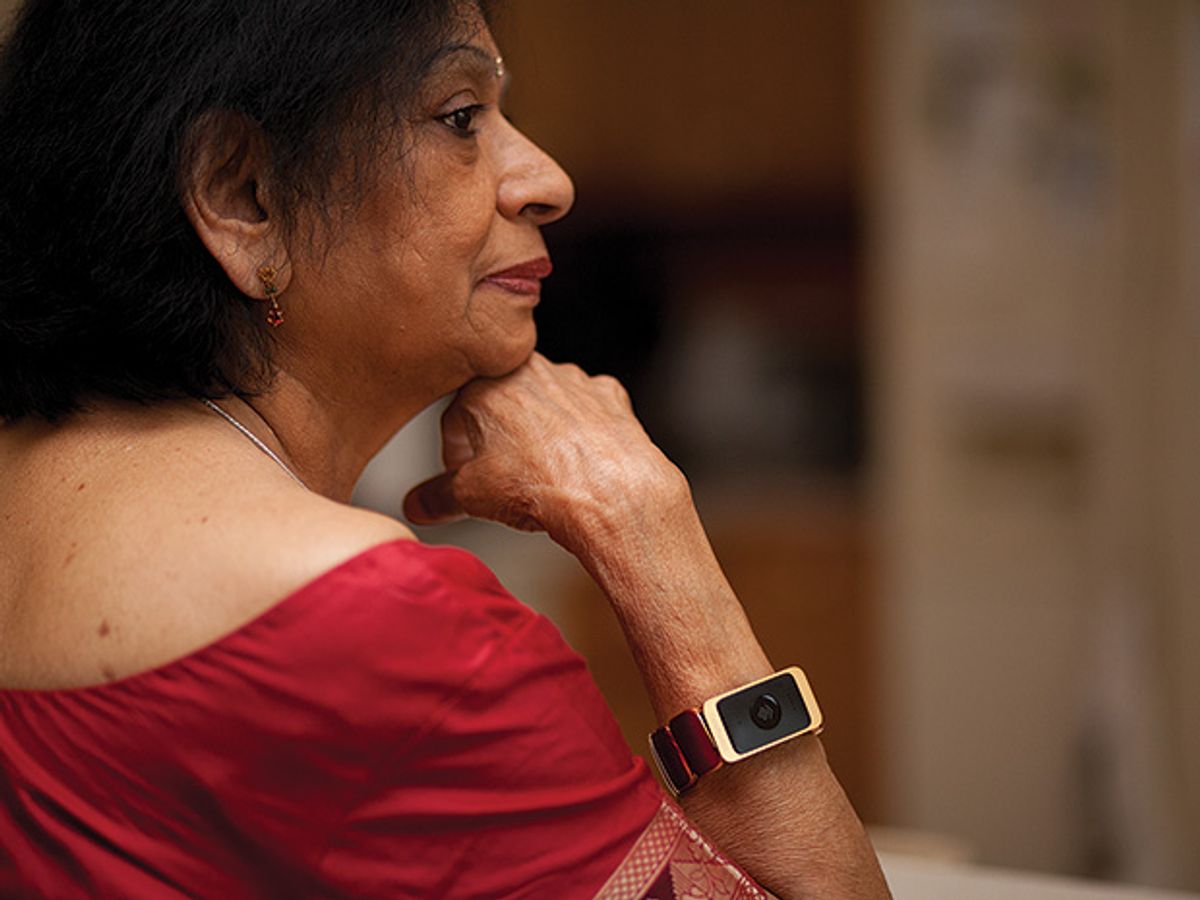 This is the final installment in a three-part series looking at exemplars of products that demonstrate how wearable devices are increasingly infiltrating everyday life; previous articles have looked at a wearable baby monitor and an activity tracker for pet dogs. In this article we look at wearables that monitor the health of elderly people unobtrusively. Rather than giving family members details about the wearers’ daily activities, these systems function in the background and raise alerts only if anomalous behavior occurs.

Satish Movva lives just 10 miles from his parents and, as a dutiful son, sees them once a week. But last year, during a routine visit, he was surprised to see his father shuffling his feet. It had begun several days earlier, but his parents had not bothered to tell him. Movva knew, however, that shuffling could be a warning sign for serious health conditions such as heart failure.

Movva’s father subsequently received medical treatment and the shuffling stopped, but the experience motivated Movva to research how to monitor his aging parents remotely. Not finding something suitable on the market, Movva, who had spent nearly three decades in IT, focusing on health care for the past two, founded the startup CarePredict in 2013 to develop Tempo, a wearable for seniors that will start shipping this year. Worn as a wristband, Tempo is packed with a nine-axis MEMS sensor (incorporating a three-axis accelerometer, a three-axis gyroscope, and a three-axis magnetometer), which tracks movements such as walking or lying down. Battery-powered beacons positioned around the home or a senior center, such as in the bathroom, bedroom, and kitchen, enable the system to recognize where the activity is taking place. A base station with Wi-Fi or Ethernet—and a cellular radio for backup—compresses and transfers the data to the cloud and records it in the wearer’s “rhythm journal.”

CarePredict can use the journal data to deduce a series of regular habits—for example, when toothbrushing occurs in the bathroom—and will log how long it takes to complete each customary activity and the time it occurred. Once a baseline is established, which takes about a week, CarePredict then monitors daily activity to detect any changes to the person’s routine. In theory, a human observer could notice these changes as well, “but a human would have to be there 24 hours a day,” says Movva.

Another startup, Lively, has designed a safety watch as well (also called Lively) that interacts with sensors located around the home and a central base station. Similar to Tempo, Lively links to a system that looks for changes to daily patterns and sends a reminder—for instance, if the senior has forgotten to take his medication.

The Lively safety watch, which is available now for US $50 with service subscription plans ranging from $28 to $35 per month, also comes with an emergency button. When pushed, the button alerts Lively’s care team to dispatch emergency services. An extended Bluetooth antenna, coiled inside the watch, allows the wearer to travel more than 450 meters from home and still stay connected to the hub.

Lively is also working on a feature that will allow the watch to recognize if its wearer has fallen and automatically dispatch emergency services without the press of a button. The system will calculate the g-force and look at other clues, such as the amount of movement in the seconds after the accident, to figure out if help is needed.

Ultimately, seniors want to stay independent without having to don a device that screams “old age.” Lively CEO Iggy Fanlo believes that this won’t be the case with his company’s product. “All the cool kids are getting smart watches,” he says.

This article originally appeared in print as “Wearables for Frail Seniors.”

Exosuit That Helps With the Heavy Lifting

This Memory Tech Is Better When It's Bendy

Battle of the (Anti-Nausea) Bands