IEEE.orgIEEE Xplore Digital LibraryIEEE StandardsMore Sites
Sign InJoin IEEE
Sebastian Thrun Will Teach You How to Build Your Own Self-Driving Car, For Free
Share
FOR THE TECHNOLOGY INSIDER
Explore by topic
AerospaceArtificial IntelligenceBiomedicalComputingConsumer ElectronicsEnergyHistory of TechnologyRoboticsSemiconductorsSensorsTelecommunicationsTransportation
FOR THE TECHNOLOGY INSIDER

Sebastian Thrun Will Teach You How to Build Your Own Self-Driving Car, For Free

Learn how to program an autonomous vehicle from Sebastian Thrun, the AI expert and Google researcher, at no cost (robotic car not included) 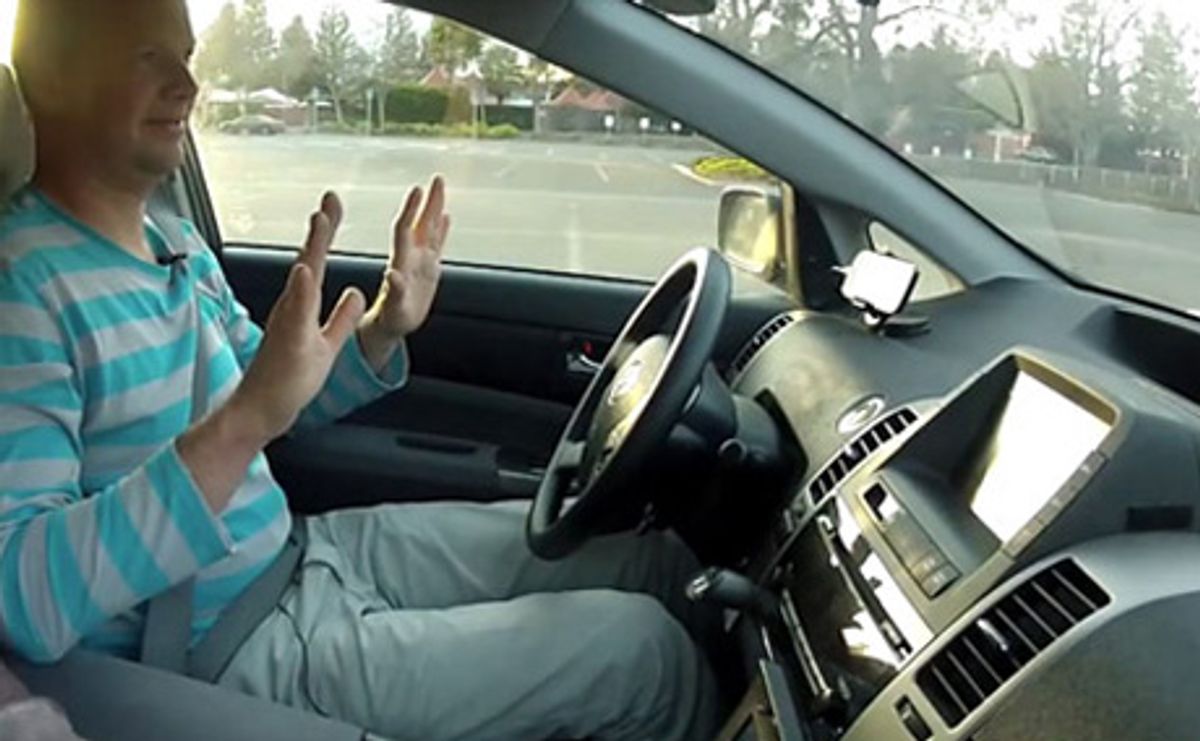 Last August, Sebastian Thrun, the brains behind Google's self-driving cars and one of the world's top AI experts, offered an online version of Stanford's Introduction to Artificial Intelligence course to absolutely anyone who wanted to take it, for free. It turned out to be just a little bit popular (over 150,000 students enrolled), and now Thrun is offering a new, totally free, seven-week online course called Programming a Robotic Car. I know, it sounds a little bit ambitious, but this is straight from the class FAQ:

Can I really learn how to build a self-driving car in 7 weeks?

Yes! In seven weeks, you will learn the basics of all the primary systems involved in programming a robotic car.

Mad props to Professor Thrun for staying focused on the camera and barely glancing once at where the car was taking him.

Okay so maybe it's more about the programming basics, and going into it with the expectation that you'll end up with one of those Google cars at the end might be a tad unrealistic. The syllabus, though, makes up for it (almost), ranging from the basics of probability to image processing to control programming. You'll need to know a little bit of Python (the programming language, not the reptile), but it's an easy language to learn if you have any sort of programming background, and there are plenty of helpful course materials to check out.

As with the original AI course, this one has lectures, homework, quizzes, a final exam, and you'll be graded at the end. It's started already, but you can still enroll (the first homework assignment is due later today, Wednesday next week [UPDATE: As one reader correctly noted, the homework is given on Mondays and due on Wednesdays the following week]), and did we mention that it was free? 'Cause it's free.

I don't know about you, but I'm the suspicious type, and when something comes along that sounds too good to be true (like a totally free robotics course taught by some of the smartest guys in the world that's open for anyone to enroll in), I start wondering how they plan to pull that off. Turns out, Thrun has started an "online university" called Udacity that's not affiliated with either Google or Stanford, and it looks like it was created as a for-profit company, with stock options for employees and backed by venture capitalists. The profit part, however, doesn't sound like it's ever going to come from the students, given Thrun's strong statements that he wants to democratize education and that education "should be free." So Udacity's strategy might be the typical Silicon Valley model of grow first, worry about revenues later.

For more about the history (and future) of Udacity, you can read these Reuters stories, and hit up the link below to sign up to take the course.

You (YOU!) Can Take Stanford's 'Intro to AI' Course Next Quarter, For Free

self driving robot ai autonomous vehicles online education Sebastian Thrun Stanford University cs373 david evans Google robotic cars
Evan Ackerman
Evan Ackerman is a senior editor at IEEE Spectrum. Since 2007, he has written over 6,000 articles on robotics and technology. He has a degree in Martian geology and is excellent at playing bagpipes.
The Conversation (0)
Robotics Type News Topic