Seabed-Mining Robots Will Dig for Gold in Hydrothermal Vents 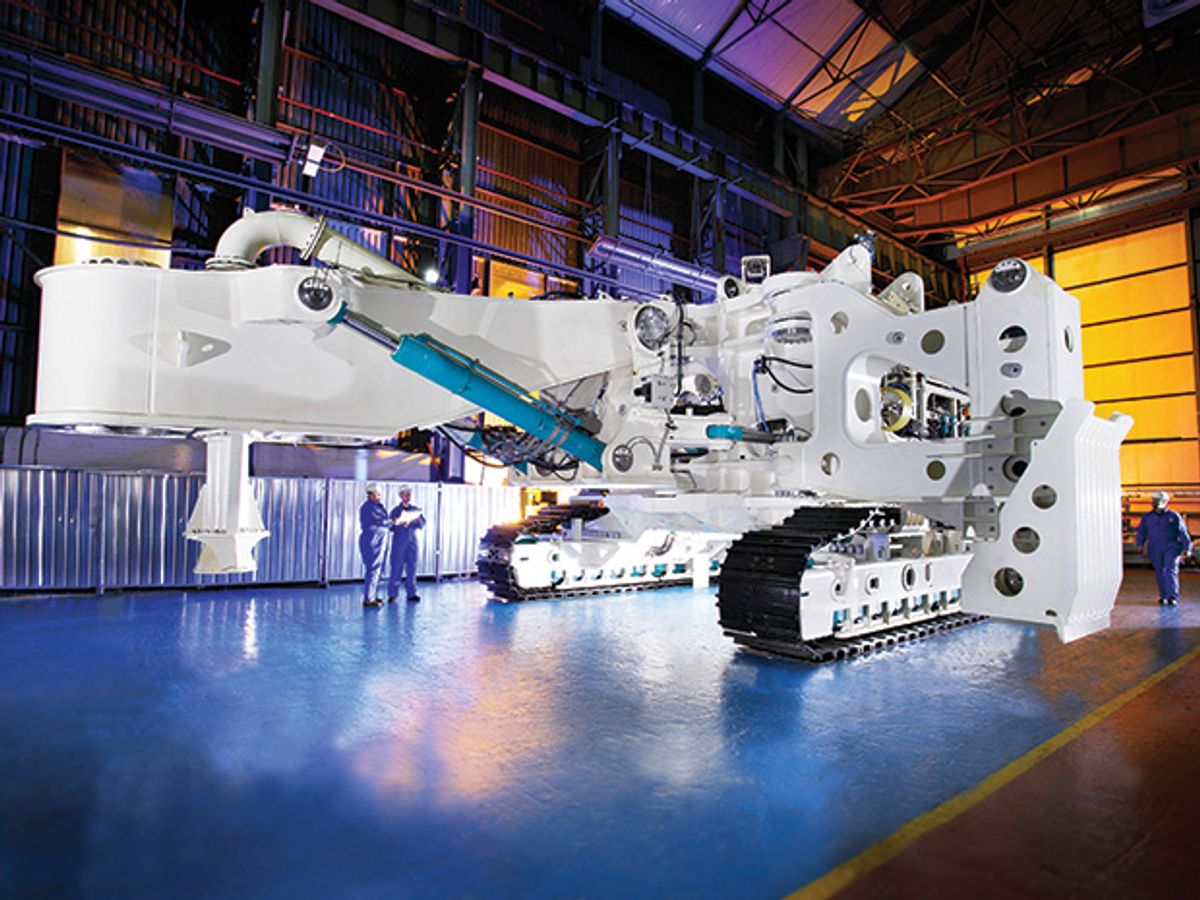 Like a Tank: The heavy-duty equipment for mining the ocean floor, like the partially assembled machine shown here, is built to withstand punishing conditions 1,600 meters below the waves. Photo: Nautilus Minerals

For decades, futurists have predicted that commercial miners would one day tap the unimaginable mineral wealth of the world’s ocean floor. Soon, that subsea gold rush could finally begin: The world’s first deep-sea mining robots are poised to rip into rich deposits of copper, gold, and silver 1,600 meters down at the bottom of the Bismarck Sea, near Papua New Guinea. The massive machines, which are to be tested sometime in 2016, are part of a high-stakes gamble for the Toronto-based mining company Nautilus Minerals.

I, Robot Miner: Three different types of remotely operated machines will be used: a “bulk cutter” (top), a “collecting machine” (center), and an “auxiliary cutter” (see photo “Like A Tank,” above). Clenched in a manipulator arm is a sample of the kind of metal-rich rock these robots will retrieve from the ocean floor (bottom). Photos: Nautilus Minerals

Nautilus’s machines have been ready to go since 2012, when a dispute between the firm and the Papua New Guinean government stalled the project. What broke the impasse was the company’s offer, in 2014, to provide Papua New Guinea with certain intellectual property from the mining project.

The deal enabled Nautilus to get financing to build a €127 million ship, the first of its kind, which will deploy the subsea mining robots and process the ore they recover. This 227-meter-long production vessel is now being built in a Chinese shipyard and is scheduled to depart for Papua New Guinea in early 2018.

The mining robots were built for Nautilus by Soil Machine Dynamics, based in the United Kingdom, which supplies construction equipment for laying undersea cables, servicing offshore oil platforms, and other heavy-duty deep-sea jobs. The main robots are a pair of tractor-trailer-size excavators. One uses 4-meter-wide counterrotating heads studded with tungsten carbide picks to chew through the metal-rich chimneys that form around superhot water spewing from sulfurous vents in the seafloor. Its partner adds brute strength, using a studded drum that is 2.5 meters in diameter and 4 meters wide to pulverize rock walls.

Dredge pumps built into these machines will push the smashed ore back to a central pile on the seafloor, where a third Nautilus robot will feed a slurry of crushed rock and water up a pipe dangling from the production vessel. There the water will be wrung out from the ore, which will be loaded on another ship and carried to China for processing.

A ship called the Hughes Glomar Explorer was constructed in the 1970s, ostensibly for deep-sea mining, although it was in fact used to recover a sunken Soviet submarine.

As 2015 drew to a close, Nautilus was still negotiating for access to a shallow-water site for an initial subsea test of these machines, which it hoped to begin in mid-2016. The plan is to do some rock cutting, though in an interview Nautilus’s CEO, Michael Johnston, says it is “difficult getting materials that are a good proxy for the materials we’ll be mining.” If time allows, the machines will also get a deep-sea trial before they are integrated with the production vessel, Johnston adds. Barring that, they will have to prove their stuff at Nautilus’s first mining site, called Solwara 1, which is located some 30 kilometers from shore in Papua New Guinea’s New Ireland province.

Assuming all goes well, the robotic diggers will spend 30 months scouring the Solwara 1 site, bringing up 2.5 million metric tons of ore containing metals worth more than US $1.5 billion at today’s prices. Next, the robots will likely set to work on one of Nautilus’s 18 other prospects in the Bismarck Sea or one of its 19 discoveries off the shores of the Polynesian archipelago of Tonga.

Competitors are staking out deep-sea mining sites of their own, with much of the development activity focused on rich deposits of polymetallic nodules in a vast region southeast of Hawaii known as the Clarion-Clipperton Fracture Zone. The potato-size nodules, found in waters more than 4 km deep, contain manganese along with nickel, cobalt, and other metals.

But some marine biologists warn that deep-sea mining interests are outpacing the readiness of scientists and governments to assess and manage the environmental impact. Verena Tunnicliffe, a specialist in deep-sea vent ecosystems at the University of Victoria, in British Columbia, Canada, says robo-miners will strip away deep-sea ecosystems that are as unique as they are poorly understood.

Johnston points out that Nautilus is taking pains to study these ecosystems and will protect them to the extent possible. A refuge zone within the leased area, for example, will provide a source of local fauna for recolonization of the company’s deep-sea strip mine.

Tunnicliffe worries that this vision for recolonization could prove wildly optimistic: “The habitat is going to be pulverized, and the energy flow of the system will be completely altered. I do not believe recolonization of these types of populations is going to happen.”

Other marine biologists are more sanguine, however. With luck, the mining will prove no more devastating to these vent communities over the long term than the frequent earthquakes and outpourings of lava that these amazing deep-sea creatures are somehow able to survive.

This article originally appeared in print as “Robot Miners of the Briny Deep.”

Contributing Editor Peter Fairley has been tracking energy technologies and their environmental implications globally for two decades, charting the engineering and policy innovations that are turning renewable energies and electric vehicles into mainstream competitors. He is especially interested in the power grid and power market redesigns required to phase out reliance on fossil fuels.