Townend designs and manages the operation of the mechanical and electronics systems for high-speed, all-terrain rally racing cars 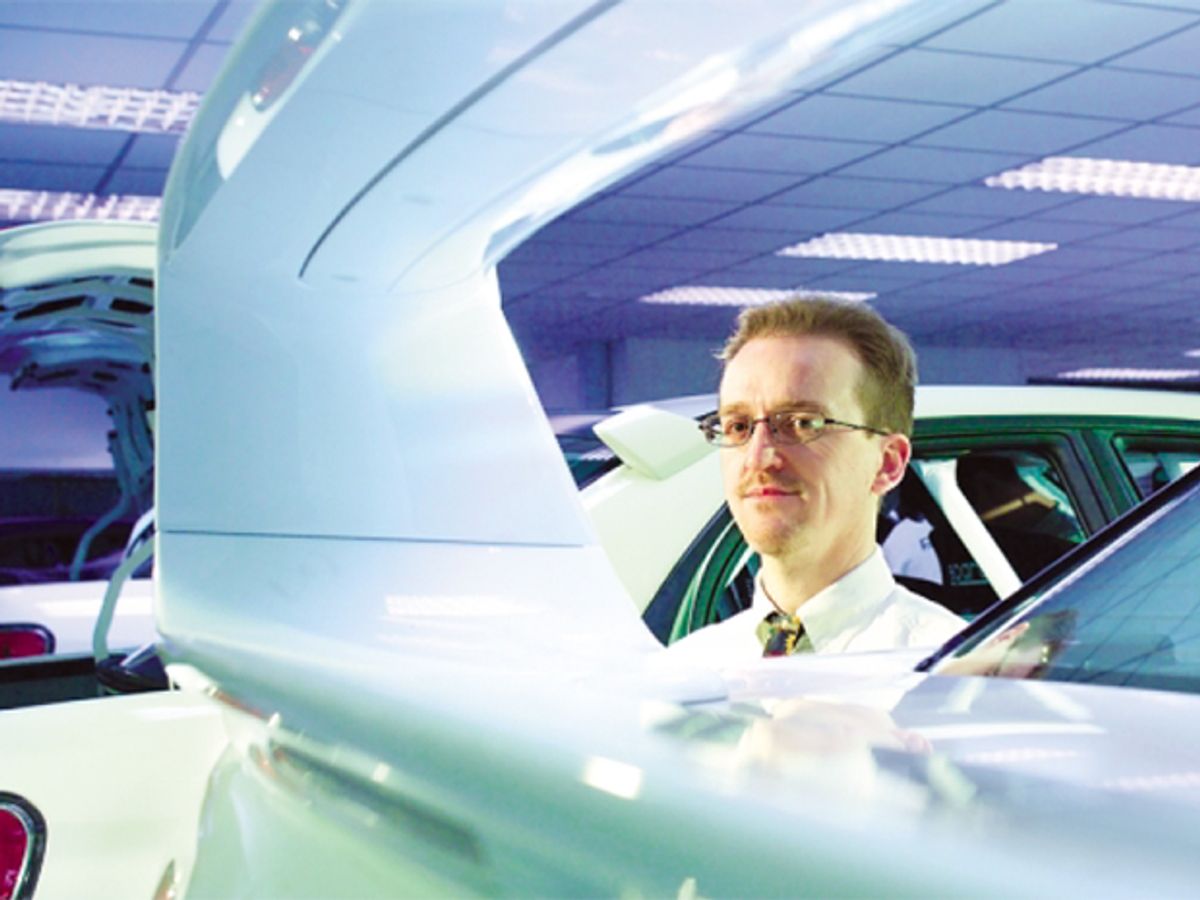 Motorsport Valley lies in the green, rolling countryside of Middle England, in Banbury, about 160 kilometers north of London. It’s not a valley at all, though. The name is a play on Silicon Valley, which it resembles in size if not topography. This is the center of the United Kingdom’s motor sports industry, worth US $7 billion a year. And it is home to the Subaru World Rally Team, one of the most successful racing teams in rallying history.

Rallying is arguably the most mechanically demanding sport yet conceived. These racing cars start out as consumer models, but almost every part of them has been rebuilt—from the gearbox and transmission to the onboard computers and communication system. Unlike NASCAR or Formula One drivers, who race on fixed tracks, rally drivers race against the clock past a series of control points over hundreds of kilometers on some of the world’s roughest roads.

Designing and building cars that can handle this kind of terrain is the dream of many an aspiring engineer. For Rick Townend, the Subaru team’s chief engineer, it’s both his day job and his life. “I get paid for doing my hobby,” he gloats.

Officially, Townend works for the UK-based engineering firm Prodrive, in Banbury, which runs the Subaru team as well as numerous other racing and rallying ventures. Prodrive helps car companies looking to make a mark in auto racing; the company is to motor sports what consulting companies such as Accenture Ltd., in Hamilton, Bermuda, and IBM Corp. are to business. Townend’s challenge, for clients such as Subaru, is to develop the systems that will make its rally cars faster and more reliable than those of its competitors.

Much of that task involves ensuring that the computing and communications systems are operating smoothly, but there are more prosaic concerns, too, like making sure that everything is bolted together properly and that all the car’s systems and equipment have been double-checked before a race.

Each rally consists of 1000 km of driving on ordinary roads and roughly 400 km of racing over rough terrain—snow, ice, or desert—as well as plunging in and out of icy puddles and leaping over the brows of hills. “This is not ordinary driving,” says Townend. In a conventional four-wheel-drive vehicle, “you’d probably take these roads in first gear, but our drivers take them at 100 miles an hour.” Racing at such a speed places huge demands on the cars, but Townend makes sure the cars take them in stride.

His experience with rallying goes back to his youth. As an amateur driver in the 1980s, Townend used a Mini he modified himself to race in night rallies over rugged roads in the northeast of England. “I never won,” he says. “My best result was fourth, which wasn’t bad given that [the Mini] had a quarter of the horsepower of many of the other cars.”

Today, it is as an engineer that Townend is making his impact on the sport. By the time he’d earned his degree in computing and electronics from Durham University in the north of England, he was well equipped to gain a new lead over his old amateur rivals.

Computing in motor sports was in its infancy, but Townend was quick to grasp its potential. He built a computer model of the suspension system of a friend’s car that optimized its racing potential. He credits this model, which he mentioned in a 1987 job interview, with landing him his first gig in the industry, working at Group Lotus PLC, in Hethel, England, which was then developing the world’s first active suspension for its Formula One cars.

Townend then jumped to the glamorous world of Formula One racing, traveling the world and working long hours to prepare the cars—not just building them but comprehensively testing them, too. “It’s fun, but it’s also tough,” he says. “You spend many hours in airport lounges and hotels.”

“You’d probably take these roads in first gear, but our drivers take them at 100 miles an hour”

In the mid-1990s, however, Formula One changed. The sport’s governing body altered the rules to reduce the amount of onboard automation. “I understand why they did it,” Townend says. “The public wants to see drivers competing against each other, not one box of tricks competing against another.”

For techies like Townend, however, the changes were a disaster, stifling innovation. That’s when he moved to rallying and to Prodrive, where he has now been for almost 10 years.

During the rallying season, Subaru’s three-car team races every two weeks in different locations around the world, such as Monte Carlo, Mexico, and Australia. The process of putting a car back together after its engine, transmission, and electronics have been serviced, either at home or on the road, is repeated so often that it becomes routine, but it’s a routine that must operate like clockwork. “We never get a situation where you plug something in and it doesn’t work,” he says.

Two or three times a year, Townend will travel with the team to the mountains of Spain or Italy to put the vehicles through their paces. Perhaps once a year, he’ll even travel to a rally. “It’s great to get out with the team,” he says. “But it’s a little different from the way I used to prepare my Mini.”

What he does: Designs and manages the operation of the mechanical and electronics systems for high-speed, all-terrain rally racing cars.

Fun factors: Works hands-on in a sport that was once just his hobby; gets to travel for test runs and races all over the world.

JUSTIN MULLINS is a science writer and artist based in London. His artwork goes on show in London this month; see http:// www.justinmullins.com.