IEEE.orgIEEE Xplore Digital LibraryIEEE StandardsMore Sites
Sign InJoin IEEE
Review: A New Exhibition Shows That Humanoid Robots Have Been Around Longer Than You Think
Share
FOR THE TECHNOLOGY INSIDER
Explore by topic
AerospaceArtificial IntelligenceBiomedicalComputingConsumer ElectronicsEnergyHistory of TechnologyRoboticsSemiconductorsSensorsTelecommunicationsTransportation
IEEE Spectrum
FOR THE TECHNOLOGY INSIDER

CREATE AN ACCOUNTSIGN IN
RoboticsTopicNewsType

Review: A New Exhibition Shows That Humanoid Robots Have Been Around Longer Than You Think

When science fiction criticsEric S. Rabkin and Robert E. Scholes argued in the 1970s that “no one would go through the trouble of building and maintaining a robot to hand wash clothes or pick up the telephone receiver,” they were apparently unaware that Japanese researchers had already made a long-term commitment to develop humanoid robots that could do exactly that. The goal was to care for the elderly in the 21st century. To this end, throughout the 1980s and 1990s, industrial giants Honda, Mitsubishi, and Toyota, as well as university research labs around the world, began demonstrating humanoid prototypes. More recently, the desire to operate in disaster sites like Fukushima has motivated even more researchers to explore humanoid designs.

But the dream of humanoid robots goes back much further than the 1970s. The Science Museum, in London, took a shot at plumbing this history with its recent Robots exhibition. (The exhibition closed in September, but it will be touring locations throughout the United Kingdom until 2019.) 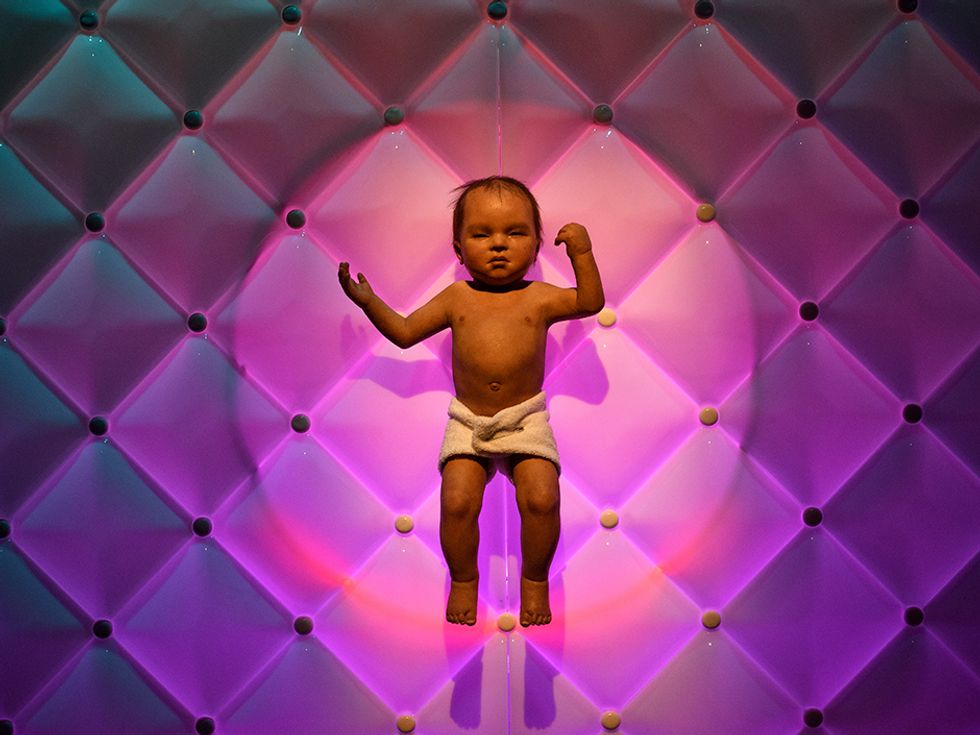 The humanoid creations on display at the Science Museum include a creepy animatronic baby.

The exhibition is a visually dazzling display of human creativity and mechanical engineering from the 1500s to today. Visitors are welcomed by a blinking, stretching android baby, perhaps representing the infancy of automation displayed in the first section, dubbed “Marvel.” A video clip of an early Spanish automaton monk, some exquisite clocks, and an 18th-century silver swan automaton represent a period when, the curators argue, “likening the human body to clockwork...led to the creation of the earliest robots.” Well, maybe.

Ancient Egyptian shabtis, automated by magic spells rather than motors, were actually the first expression of the human desire to re-create ourselves as machines, as the exhibit pamphlet puts it. Expecting to have to labor in the fields of the afterlife, people buried mummiform figurines with the deceased, expecting the figurines to do all the hard work. Still, given the challenges of mounting an exhibit like Robots, the result is impressive. The “Obey” section includes two beautiful examples of craftsmanship inspired by the industrial revolution: a finishing lathe from the mid-1700s, which mimicked the handiwork of humans by producing geometrical designs for watchcases and other objects, and an early 20th-century example of a Northrop automatic fabric loom.

A wall of toys, models, and magazines, and a stage of full-size humanoids from science fiction films, including Maria from Metropolis and an endoskeleton from Terminator 2: Judgment Day, share the “Dream” section with early novelty and exhibition robots. Among them is a replica of Eric, the electrically powered mechanical man that helped open the Model Engineering Exhibition in London (1928), and Cygan, built in 1957, which ended its performing career as a mascot for a car dealership in Sussex, England. Hobbyist-built humanoids welcome visitors to the “Build” area and show off synthetic speech and sensors that help them track human movements.

The “Imagine” section represents the combined recent achievements of researchers in improving the relationship between robots and humans. Unlike earlier automata that were essentially wind-up toys with preprogrammed motions, robots of the 21st century are learning to sense human expression and movement, and to respond in useful ways. Among those on view here are RoboThespian, the first full-size humanoid to be commercialized (IEEE Spectrum covered its theatrical debut in New York City in 2015); Hiroshi Ishiguro’s Kodomoroid, a female humanoid robot “employed” as a television newsreader; Rethink Robotics’ Baxter, a dual-armed industrial robot with a virtual face designed to fit into a human factory workspace (and another Spectrum favorite); the Shadow Dexterous Hand, which replicates the movement of a human hand; and several childlike humanoids designed to help children with learning and social deficits. Ironically, these child-friendly robots are typically either switched off or were unable to sense the children waving and yelling through the exhibit glass. Softbank Robotics Corp.’s NAO humanoid, whose advanced sensing and communication abilities make it a popular platform for the annual RoboCup, stood motionless.

In his 1965 preface to the science fiction collection The Pseudo-People: Androids in Science Fiction, William F. Nolan called humanoid robots an inevitable development: “The android will duplicate the human form as nearly as possible; synthetic flesh will cover a body and brain made up of superbly designed electronic components.” He would have appreciated this exhibit.

This article appears in the October 2017 print issue as “500 Years of Humanoid Robots.”

The prosthetics industry is too focused on high-tech limbs that are complicated, costly, and often impractical

In Jules Verne’s 1865 novel From the Earth to the Moon, members of the fictitious Baltimore Gun Club, all disabled Civil War veterans, restlessly search for a new enemy to conquer. They had spent the war innovating new, deadlier weaponry. By the war’s end, with “not quite one arm between four persons, and exactly two legs between six,” these self-taught amputee-weaponsmiths decide to repurpose their skills toward a new projectile: a rocket ship.

The story of the Baltimore Gun Club propelling themselves to the moon is about the extraordinary masculine power of the veteran, who doesn’t simply “overcome” his disability; he derives power and ambition from it. Their “crutches, wooden legs, artificial arms, steel hooks, caoutchouc [rubber] jaws, silver craniums [and] platinum noses” don’t play leading roles in their personalities—they are merely tools on their bodies. These piecemeal men are unlikely crusaders of invention with an even more unlikely mission. And yet who better to design the next great leap in technology than men remade by technology themselves?