QRIO: The Robot That Could 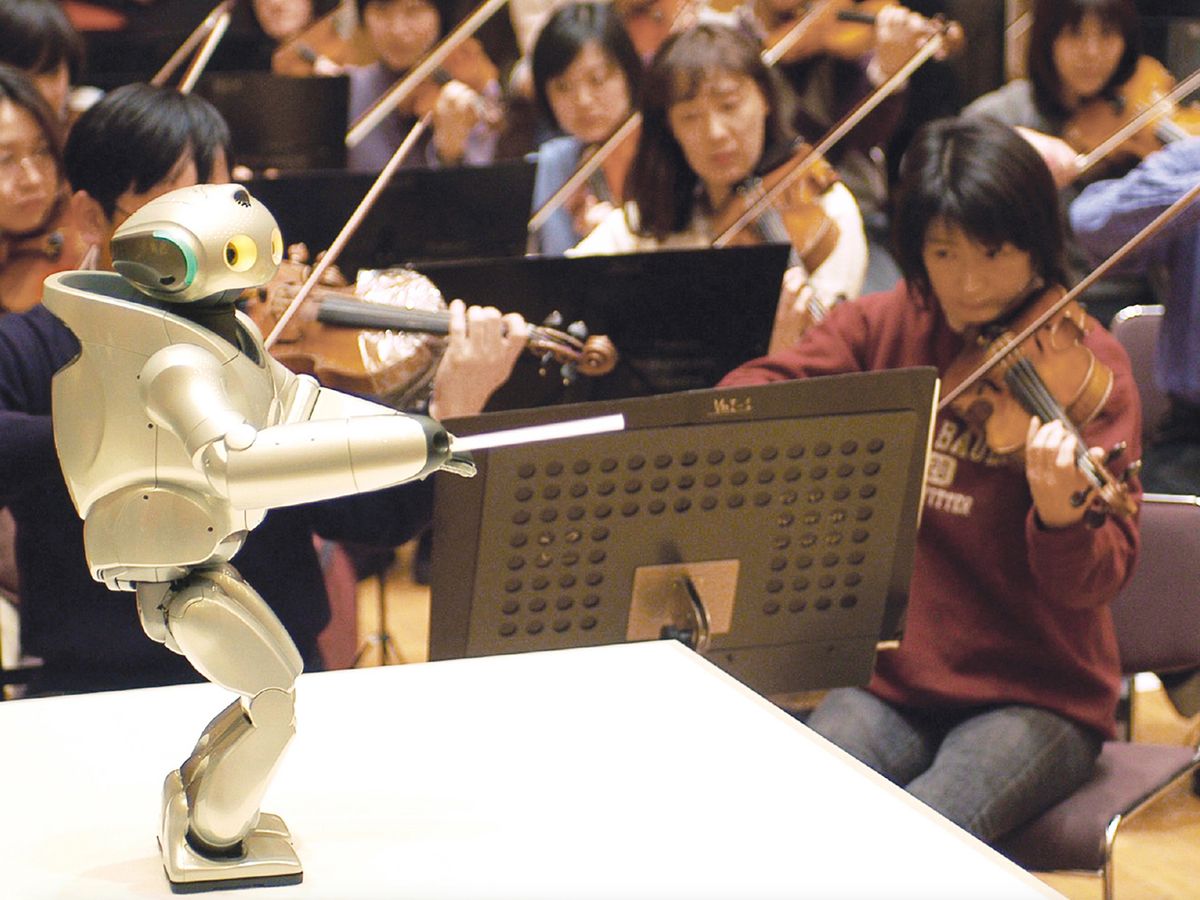 Roll Over, Beethoven: Qrio, which stands for Quest for Curiosity, is a creature of many talents. Earlier this year it conducted the Tokyo Philharmonic Orchestra in a rehearsal of Beethoven’s Fifth Symphony, which was performed a few days later in Tokyo’s Bunkamura Hall at a concert for children. Photo: Kyodo

He has played golf at a pro tournament in Hawaii, acted in the Japanese TV show “Astro Boy,” danced and sung on stages from Las Vegas to Hong Kong, and even conducted the Tokyo Philharmonic Orchestra in a rousing rendition of Beethoven’s Fifth Symphony. And he’s barely a year old and not quite 60 centimeters tall.

Meet Qrio, pronounced “curio,” the biped humanoid robot from Sony Corp., Tokyo. The dream child of Yoshihiro Kuroki, general manager of Sony Entertainment Robot Co. in Shinbashi, Japan, Qrio is a remarkable assemblage of three powerful microprocessors, 38 motor actuators, three accelerometers, two charge-coupled device (CCD) cameras, and seven microphones. It can hear, speak, sing, recognize objects and faces, walk, run, dance, and grasp objects. It can even pick itself up if it falls. At the moment, there are dozens of Qrios in existence. They’re basically corporate ambassadors that have generated so much good will (and publicity) at trade shows and the like that they have been joined by others in Japan—such as Toyota’s recently unveiled, trumpet-playing robot. Like the rest, Qrio is not yet for sale.

No one even knows how much Qrio will cost when it does come on the market. Sony has said only that the price will probably be comparable to that of “a luxury car.” For the past five years, the company has been selling its robotic dog, Aibo, for US $1500.

That Qrio or a successor eventually will be sold for use around the home isn’t in much doubt. In fact, one reason for its small size—58 cm and 7 kilograms—is safety: striding about in homes, a small robot is less likely to harm people by falling on them. Another reason is that shorter limbs and appendages are easier to move and control.

In designing Qrio, Kuroki sought to build something capable of entertaining people by interacting with them through movements and speech. He succeeded. Seeing a group of Qrios dance or sing in unison, or respond to speech, is such an arresting experience that it’s easy to lose sight of the fact that they’re basically just very sophisticated toys.

Underlying Qrio’s ability to interact with humans is software that performs face and voice recognition and speech synthesis. The CCD camera located behind each of the robo’’s “eyes” collects the facial image of a person and sends it on to the face-recognition software, which compares it with all the faces a Qrio has encountered. The two cameras also give Qrio stereoscopic vision, allowing it to determine the location of objects in its view and to navigate around them.

By analyzing the information from the seven microphones in its head, Qrio can also recognize the voice of someone it knows and determine which direction the voice is coming from. The robot understands spoken commands, can say more than a thousand words, and is able to learn new ones.

When Qrio recognizes words, it responds with an appropriate answer through a speaker in its mouth, using pitch and volume, as people do, to express emotion. It also shows emotion by flashing colored lights that surround its eyes.

The robot’s remarkably fluid motion comes from flexible joints—38 of them—each controlled by a separate motor. Qrio senses its own motion through accelerometers in its torso and feet, a function analogous to that of the human inner ear.

Qrio’s intelligence and memory are centered in a circuit board in its chest, which contains three microprocessors, each with 64 megabytes of memory. Each microprocessor has a different primary responsibility. One handles motion, another performs speech recognition and synthesis, and a third analyzes visual data. Qrio even has a nervous system—the electrical signals that transmit information and commands back and forth between the microprocessors and the actuators and sensors.

In designing Qrio, Kuroki and his team had to solve two key problems. The first was to replace the conventional actuators, which were large and heavy, with smaller, lighter ones. The new actuator they designed has all the required elements—the motor, the motor controller, and the electronics needed to communicate with the motion-control microprocessor—contained in a unit small enough to be placed right at the joint.

The second problem was to ensure that Qrio can maintain its balance as it walks, runs, hops, and dances. That was solved by the development of a motion-control system that combines information from the sensors with knowledge about the position and motion of each limb. The system also calculates what other motions have to occur to keep Qrio upright and stable and issues commands to the limbs to execute those motions. Not only does the system allow the robot to maintain its balance while walking on uneven surfaces or slopes but also when an external force, such as a gentle shove, is applied—features that will undoubtedly be needed when Qrio starts sharing houses with children, people, and pets.

And when might that be? Sony hasn’t said. But in the foreseeable future, certainly. The popularity of Sony’s robotic dog, Aibo, and the various robotic vacuum cleaners and lawn mowers now available are proof that the age of semiautonomous personal robots has already begun. And after household chores, entertainment is the next likely application. At a robotics roundtable last January in Las Vegas, sponsored by Evolution Robotics, Satoshi Amagai, president of Sony’s Entertainment Robot Co., said that Aibo is already the third most recognized Sony brand in Japan, behind only the Walkman and the PlayStation. And Illah R. Nourbakhsh, an entrepreneur and associate professor at Pittsburgh’s Carnegie Mellon University, predicted that the first massive popular success for robotics will be in entertainment.

So it won’t be long, surely, before Qrio or kin will be singing and dancing their way into our hearts and homes.