Nissan Says: Leave the Driving to Us 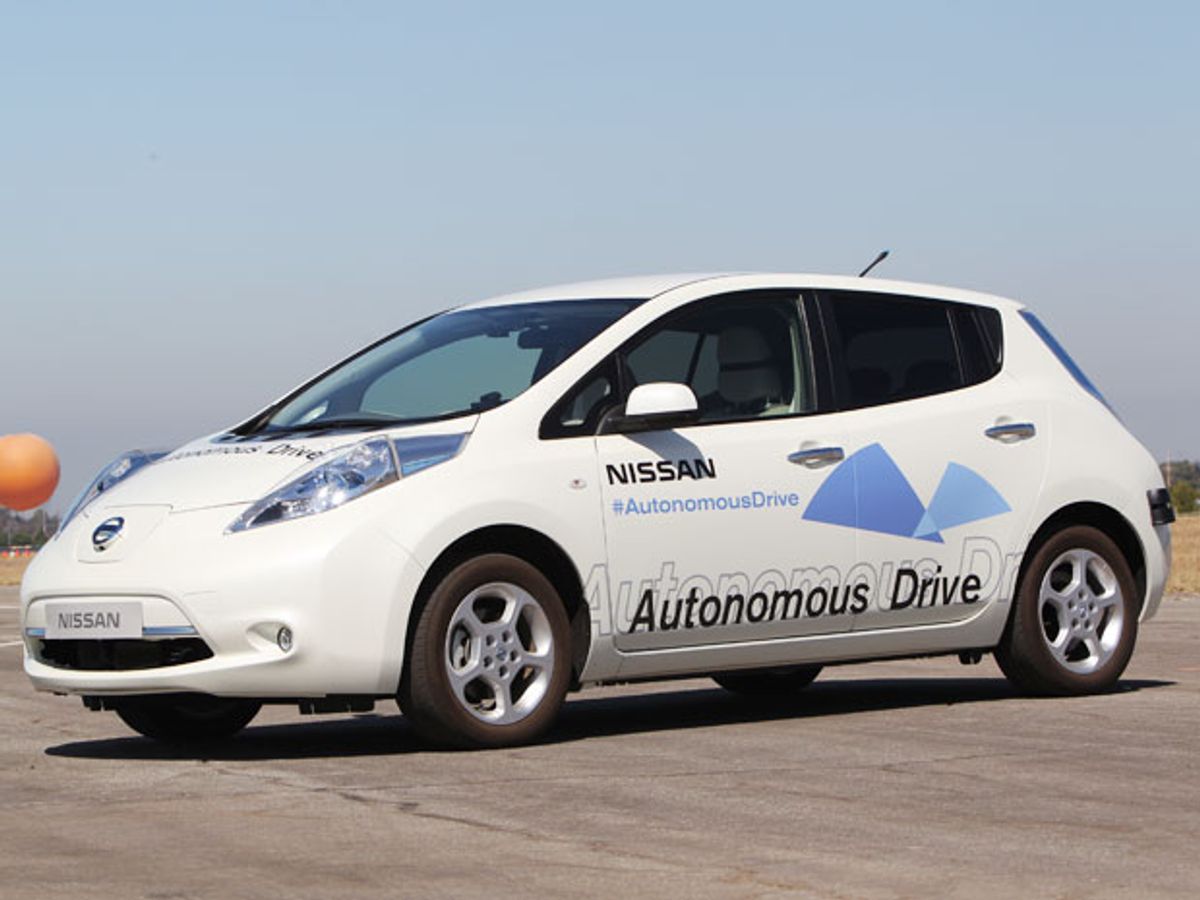 It's clear that driverless cars are coming, the only question is when. Carlos Ghosn, chief executive of Nissan, has the answer: in seven years.

"I am committing to be ready to introduce a new, ground-breaking technology, Autonomous Drive, by 2020, and we are on track to realize it," he said in a statement yesterday.

Nissan says that it's aiming not just for a single car but for a family of autonomous vehicles. Still, a lot of auto companies, and Google, to boot, are also looking into driverlessness. What are we to make of Nissan's big, fat promise?

It all comes down to the top guy. Ghosn is the Babe Ruth of autoland: He doesn't just try for homers, he points to where the ball is going to go. In 2007 he went on record saying he'd introduce a mass-market, zero-emissions car by 2010, and by that date Nissan did in fact introduce the all-electric Leaf. Today it's the top-selling e-car in the world. So don't write Ghosn off.

Yet while e-cars' green appeal was always obvious, the justification for an autonomous car requires a little explaining.

First, if robocars can be made safe at all, it should be possible to make them super-safe. It's the same as it was with chess computers—once they got good, it was a foregone conclusion that they'd get very, very good. A robocar can't get tired, drunken, angry or insane. It won't flout the law. And it isn't a teenager.

Second, robocars free us from the drudgery of driving, turning our commutes into snooze fests, our soccer moms into ladies who lunch.

Third, and best of all, autonomous vehicles meld marvelously with the newest craze in urban transport: vehicle sharing.

"Why not have a 2-person driverless car or pod instead of Yellow Taxis in Manhattan?" asks Larry Burns, the former head of research and development at General Motors and co-author of a Columbia University study of that very scenario. "In Manhattan, cabs drive 0.6 mile empty for every mile with a passenger, and we can take that number down to 0.05."

If sharing took over, it would free up mountains of capital locked in cars that spend most of the day in a parking spot, often one that charges by the hour. When they do park, they can do so far from the madding crowd, leaving city streets less crowded. It's all like the vision that inventor Dean Kamen sketched out for his Segway, but with air conditioning, a roof over your head, and a seat underneath you. And a trunk in the back. And a sound system. And maybe a second passenger.

To be sure, there are more technical challenges than the designers of the Nissan Leaf ever faced. They knew they could make an electric car that could move people from here to there; their only problem was in making a profit off of it. Driverlessness, however, presents real technical problems.

The main one is avoiding collisions. Google's driverless car is loaded with sensors, but it also relies on GPS and an Internet connection—which is just what you'd expect from the world's leading network company. But Nissan says its system would be more self-contained.

“We don’t count on infrastructure so much. All the technology is in the cars,” Mitsuhiko Yamashita, Nissan’s executive vice president for research and development, told journalists yesterday, Bloomberg Businessweek reports. “We are trying to get to crash-free, fatality-free vehicles.”

Nissan's test car, a modified Leaf, uses GPS just to find its destination; the rest it does in-house, as it were. That way, even before the full autonomous system gets regulatory approval, some of its elements can be included as backup safety features in plain, old human-driven cars.

One good way to get full approval is by involving government from the get-go. That's what Nissan and its collaborators in Better Place tried to do with a battery-swapping idea. That venture didn't work out. But the idea of swapping lives on; Elon Musk, CEO of Tesla Motors, recently spoke well of it.

Perhaps the first robotic taxicab program could be set in a small, self-contained compound, like Disneyland or Yellowstone National Park. It'd be perfect wherever drunk drivers clog the roads. How about Las Vegas?