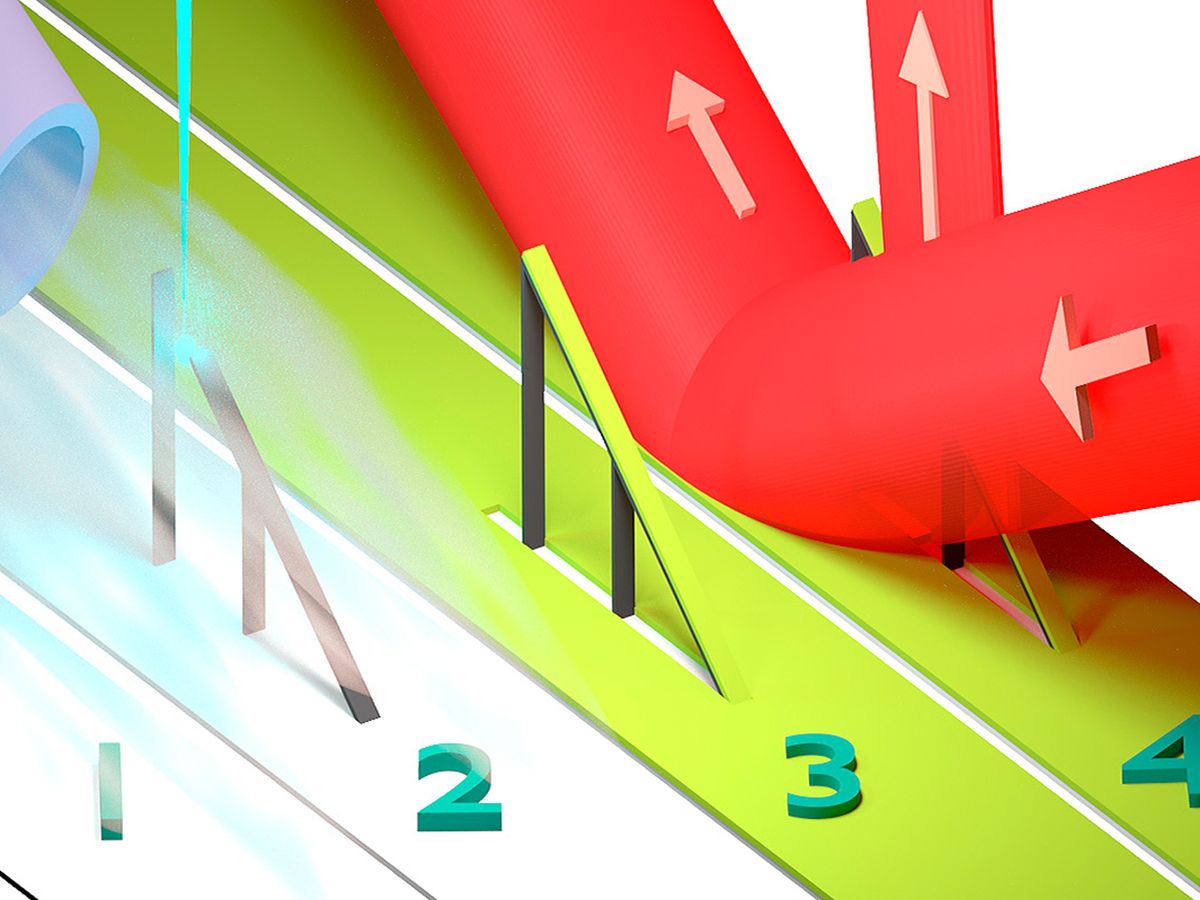 This illustration shows the steps to fabricate a new 3D magnetic circuit. In steps 1 and 2, an electron microscope and gas injector print a scaffold onto a silicon substrate. In step 3, the scaffold is covered with a magnetic material. In step 4, a laser reads the magnetic information contained within the structure.
Illustration: Dédalo Sanz-Hernández
nanotechnology devices quantum mechanics non-volatile memory 3D circuits Internet of Things electrons University of Cambridge circuits

Researchers at the University of Cambridge in the UK have broken the paradigm of two-dimensional circuits used to store and transmit data and created a nanoscale magnetic circuit that can send along bits of information in three dimensions.

These new magnetic-based circuits have the potential to form architectures where logic and memory circuits are merged together, according to the researchers. This merger could reduce the energy required for data transfer associated with any logic operation and could prove to be a boon for battery-powered applications, such as mobile phones or the Internet of Things.

In magnetic circuits such as the ones used in this work, which is described in the journal ACS Nano, the feature of electrons used to encode information is not their charge, but their spin—a quantum-mechanical property.

“The difference between a standard and a magnetic system can be visualized in a simple way by comparing people running on a stadium track versus a crowd wave at the grandstand,” explained coauthor Dédalo Sanz-Hernández. “In a traditional system, electrons are physically moving, like people running, and collide with obstacles along their way. In magnetic systems such as these, in analogy to a crowd wave, people do not need to move, but transmit the information by interacting with their neighbours in a very efficient way.”

There are two steps to create the circuit, according to coauthor Amalio Fernández-Pacheco. First, a nanoscale three-dimensional (3D) scaffold is printed using an extremely precise beam of electrons. Second, a magnetic material is placed over this scaffold via traditional deposition methods such as evaporation or sputtering. This way, the 3D shape of the scaffold is transferred into the magnetic material, creating a 3D magnetic nanocircuit.

“Until now, it was not possible to make such a device, and there were no means to probe its magnetic properties.”

Specifically, the 3D-nanoprinting method used here has been carried out in a scanning electron microscope (SEM), incorporating a nozzle to inject a gas inside the vacuum chamber. In this process, electrons irradiate the substrate at precise locations, solidifying the gas.

“The SEM is the perfect tool for this task, as it provides a highly focused beam of electrons, and has the capability of scanning the beam with high precision,” said Fernández-Pacheco. “By moving the beam in a similar manner to how standard 3D printers work, we are able to manufacture complex geometries at the nanoscale.”

While the process for fabricating the circuit was innovative, the key breakthrough was the production of a functional 3D nanomagnetic circuit, and proving that it can transport information in three dimensions. “Until now, it was not possible to make such a device, and there were no means to probe its magnetic properties,” said Fernández-Pacheco.

Before these chips can enable a next generation of electronics, the major engineering challenge will be to develop 3D nanofabrication techniques that are scalable, where the marginal cost of each circuit decreases as the number of circuits increases, according to Fernández-Pacheco.

A second engineering challenge will be to demonstrate a competitive prototype in the lab. “We have just created the tools to make these prototypes, but for instance the motion of magnetic data in our circuits is currently performed by applying external magnetic fields, which is something impractical for today’s computers,” added Fernández-Pacheco.

If these challenges can be met, one of the most promising applications for these circuits will be for memory and data storage devices where their non-volatility promises low power consumption in comparison to traditional circuits.

Fernández-Pacheco and his colleagues will now try to develop sophisticated prototypes with more functionality that incorporate different types of magnetic materials, and integrate electrical circuits that can move magnetic data by applying electrical currents.

The Radio We Could Send to Hell

In an artist's rendering, a future Venus rover gains some power from wind blowing in the planet's thick atmosphere.

There were few bright spots in the pandemic summer of 2020. One of the most dazzling was the flight of U.S. astronauts to the International Space Station and their safe return to Earth aboard a commercial spacecraft from SpaceX. This demonstration was significant for many reasons, one of which was that it suggested a future in which NASA, freed from the demands of getting people to low Earth orbit, could aim much farther. Perhaps as far as Venus.

Excitement over a possible mission to Venus was stoked by the (now somewhat disputed) discovery of phosphine gas—a possible sign of microbial life—in that planet's atmosphere. But the second planet from the sun has such an extreme environment that the longest-lasting lander, the Soviet Venera 13, was able to send data for only 2 hours and 7 minutes. The average surface temperature on Venus is 464 °C, the atmosphere is dense with highly corrosive droplets of sulfuric acid, and the atmospheric pressure at the surface is about 90 times that of Earth. Yet scientists think of Venus as our home world's twin.