The Vision EQS appears to have the design, luxury, and driving range to match anything in the electric space 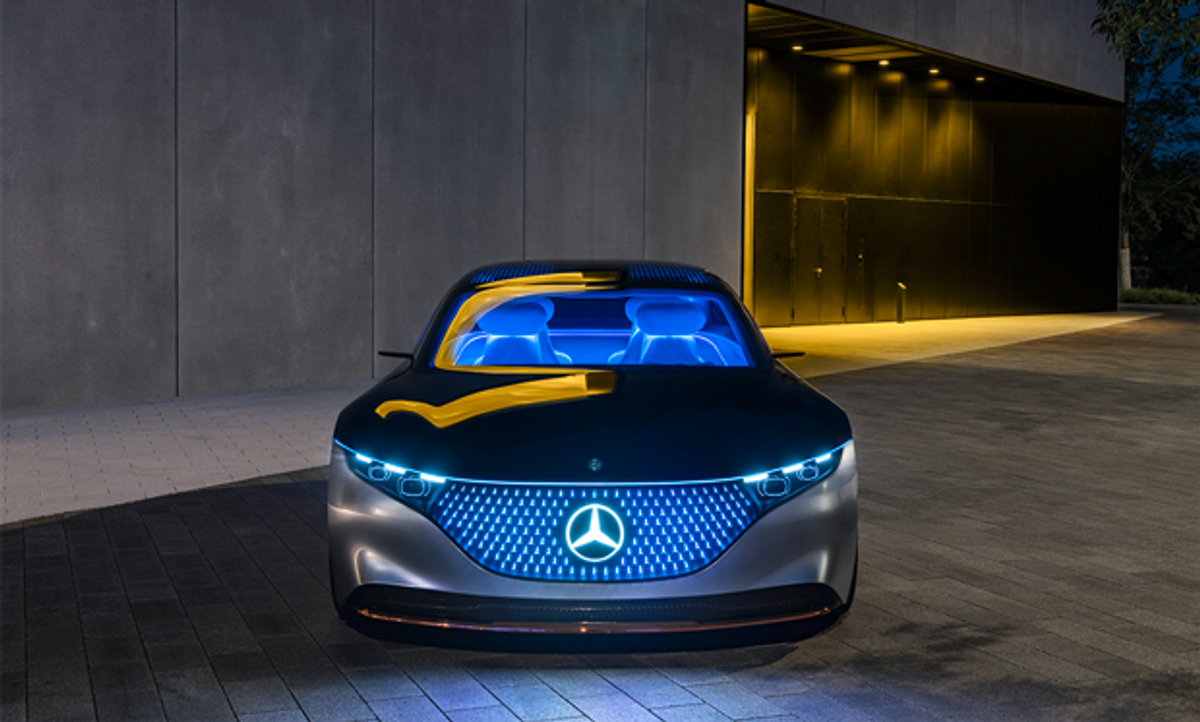 Mercedes-Benz has apparently seen the light on electric vehicles, including a vow to create an entirely carbon-neutral fleet of new cars by 2040. And EV fans will definitely see the light of its new Vision EQS, a concept sedan whose groundbreaking “Digital Light” headlamps are an integral part of its networked safety systems.

Mercedes unveiled the Vision EQS Tuesday at the Frankfurt Motor Show. It’s a dramatically styled sedan with an equally dramatic driving-range claim: Up to 700 kilometers (435 miles), based on lab testing under Europe’s new WLPT test cycle, which is designed to generate more-realistic estimates of real-world EV efficiency.

If Mercedes can speed a production version of the EQS to market, that 700 km would make it the marathon champ of current EV’s, topping the 595 km of the Tesla Model S and Model X Long Range versions. It would also be a significant, 250-km range advantage over the 2020 Porsche Taycan, which has posted a 450-km WLPT estimate. The EQS’s range would put it more than 350 km beyond the demands of stricter U.S. EPA measures.

A 350 kilowatt ultra-fast charging system, similar to the Porsche’s, allows an 80-percent charge in 20 minutes or less.

The Vision EQS appears to have the design, luxury, and driving range to match anything in the electric space—along with the coolest light show since Pink Floyd and its lasers.

With roughly 100 kilowatt-hours of batteries packaged underfloor, and electric motors at both axles, the EQS can vary all-wheel-drive power between front or rear wheels. Mercedes pegs output at roughly 350 kW (469 horsepower), with 759 Newton-meters (560 pound-feet) of torque—good for a 0 to 100 km/h (0-60 mph) surge in less than 4.5 seconds.

The first all-electric Mercedes, the EQC crossover SUV, is already on sale in Europe, and arrives in America next year as a 2021 model. This Vision EQS, being an auto-show concept, is designed as both a showstopper and as an intriguing teaser for Mercedes’ latest designs and technology. The body previews the brand’s streamlined “One Bow” design language that will influence several upcoming models. Inside, a series of projection displays form an unbroken, floating sculpture for the dashboard that recalls the cockpit of a luxury yacht. Maple wood trim combines with sustainable materials, including microfiber made from recycled PET bottles; and a roof liner whose textile includes recycled plastic from ocean waste.

Mercedes claims a world’s first for the Digital Grille, a black-panel light matrix whose 188 individual LED’s create a 3D effect of free-floating stars and pixels. At the rear, 229 individual, illuminated stars nod to the Mercedes’ logo, part of a 360-degree “Lightbelt” that surrounds the car, offering a wealth of possibilities for future Mercedes lighting designs.

That sensor suite of radar and cameras is networked with what Mercedes is pitching as a revolution in vehicle lighting. Its Digital Light system combines software algorithms with holographic HD lenses. Each lens contains more than 1 million micromirrors, which allows individual control over each point of light. The result is precise control over the brightness and direction of beams, and the ability to “mask” oncoming traffic from light to avoid dazzling other drivers. Onboard cameras and radar detect vehicles, people, or objects on the road, and combine that data with digital navigation maps.

The most intriguing bit? The system can project symbols, letters and other graphical information onto the pavement in HD quality. The headlamps can “fill in” missing lane markers, project a guideline of the car’s width—great for squeezing through narrow spaces—or beam arrows to point out pedestrians or animals near the roadway. Navigation data, such as directional arrows, can be displayed on the pavement instead, so drivers don’t have to take eyes off the road even for an instant. Other potential warnings include lane-keeping, blind-spot and speed limit data, and symbols for slippery road surfaces, upcoming construction sites, and impending rear-end collisions.

The Benz concept opens up other possibilities, including the ability to communicate with other drivers or pedestrians. (But no flipping the digital bird, thank you). The lights can flash familiar “zebra stripes” on the street to cue pedestrians that it’s safe to cross, or a stop sign to warn them when it’s not. All told, the Vision EQS appears to have the design, luxury, and driving range to match anything in the electric space—along with the coolest light show since Pink Floyd and its lasers.