This roboticist has transformed robot soccer into a global phenomenon 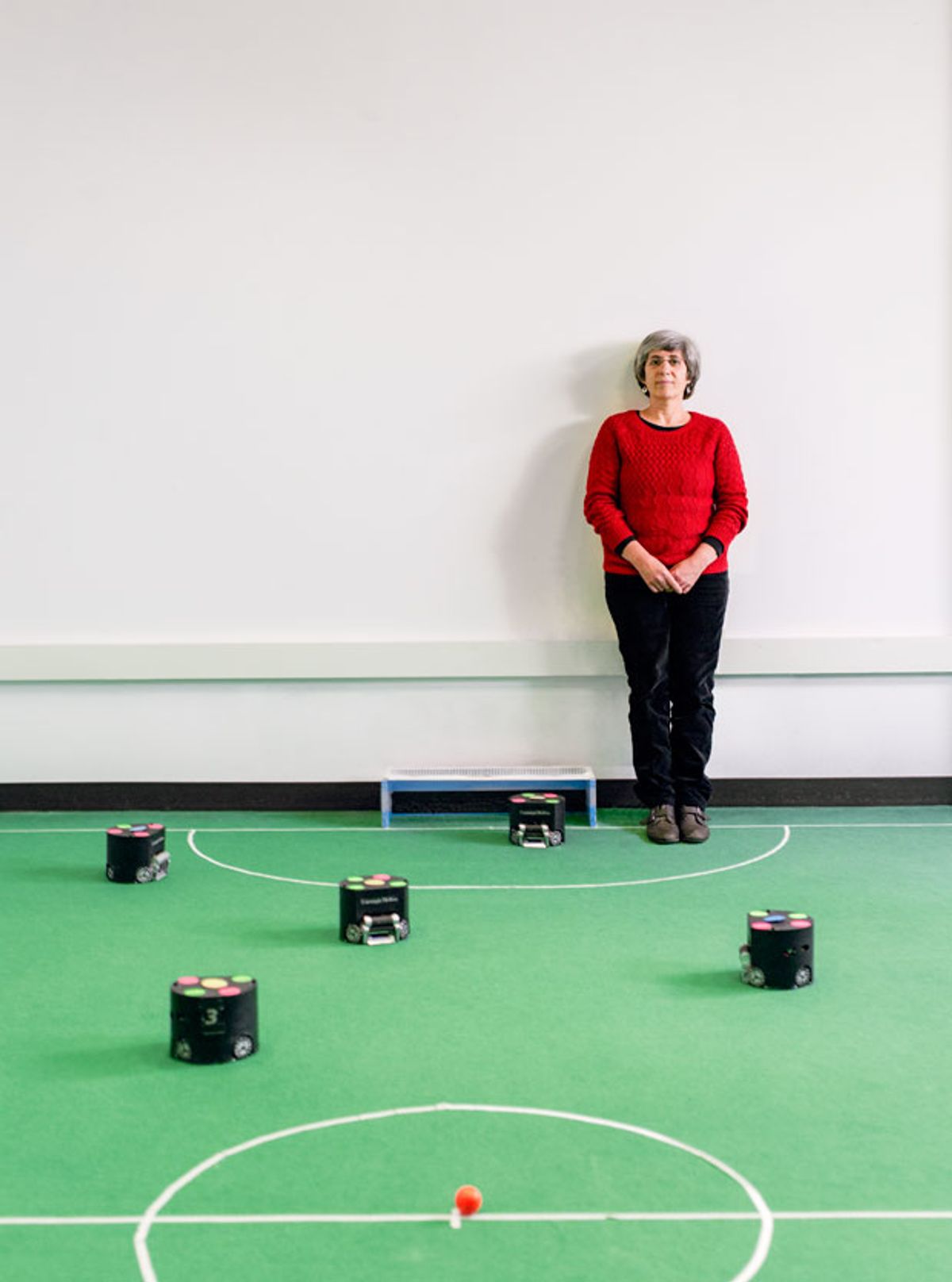 Stepping out of the elevator on the seventh floor of Carnegie Mellon University's Gates Center for Computer Science, I'm greeted by an ungainly yet courteous robot. It guides me to the office of Manuela Veloso, who beams at the bot like a proud parent. Veloso then punches a few buttons to send it off to her laboratory a few corridors away.

Veloso, a computer science professor at CMU, in Pittsburgh, has worked for over two decades to develop such autonomous mobile robots. She believes that humans and robots will one day coexist, and my robot escort, named CoBot (for Collaborative Robot), is one of her contributions to that future.

Her far greater contribution is as the force behind the global sensation of robot soccer. The RoboCup competition, which she has championed since its earliest days, has not only advanced the field of robotics but also drawn many into the discipline, shaping bright minds into skilled researchers and designers. The 2013 championship in the Netherlands attracted 410 teams from 45 countries and 40,000 spectators. It's safe to say that the phenomenon would not have taken off or gone as far if not for Veloso's pioneering research, energetic promotion, and keen foresight.

Veloso's introduction of artificial-intelligence techniques to RoboCup was a game changer, says Minoru Asada, a professor of robotics at Osaka University, in Japan, and one of the founders of RoboCup. As a leader in RoboCup and in related research and education, Veloso has mightily advanced robotics, he says, calling her work “an invaluable bridge" between AI and robotics.

Hero Moment: She promoted the international robotics competition as a vehicle for training young researchers and advancing autonomous robots.

Veloso walks fast and talks in bursts, her spry body barely containing the energy inside. Back in the early 1990s, Veloso was a freshly appointed professor at CMU, where she'd received her Ph.D., and she had an interest in artificial intelligence. In 1994, at an AI conference, she saw a rough demo of some soccer-playing robots. Despite growing up in soccer-crazed Portugal, she cared little for the sport (she prefers American football). But as a challenge for autonomous systems, it was perfect, she says. And so she became one of the first researchers to jump at it.

She started by developing soccer simulations with her student Peter Stone, now a professor of computer science at the University of Texas at Austin. Soon after, Veloso and other students began designing small robots that could observe, reason, act, cooperate, and learn while moving about on a field. But building robots wasn't easy in the 1990s, and it took her team two years just to get the motors, controllers, and sensors right. Even trickier was figuring out how to make five of them play together.

Veloso recalls a typical colleague's incredulous remarks: “What in the world are you trying to do with these five robots?" In those days researchers were working on single special-purpose designs, perhaps a robot that could go to Mars or dig ore in a mine. “It was all about one robot that would do great things," she says. But Veloso had bigger plans.

In 1997 she cofounded the RoboCup Federation and helped launch the first games. She later held various RoboCup leadership roles and continues to advise the CMU team. The change over the years has been remarkable, she says. Early on, researchers were lucky if their soccer-playing automatons moved as programmed. These days, teams of humanoid robots play real games, complete with defensive and offensive tactics and penalty shoot-outs.

That sophistication is due in no small part to Veloso's own contributions to AI. The roughly coffee-can-size cylindrical robots that her team competes with in the Small Size Robot League—in which they hold the most finals titles—plan their moves with stunning accuracy, shooting balls with such force that they've left dents in her lab's walls. The team's early bots were made with Erector sets, but even then their intelligence surpassed that of other machines. Veloso's secret weapon was a vision algorithm that used lines, patterns, and color to help each robot track the ball and other bots.

In 2009, Veloso shared her team's vision software with other competitors, establishing an open-source approach that both leveled the field and raised the bar at RoboCup.

RoboCup's official goal is for a robot team to defeat the human World Cup champions by 2050. Indeed, a highlight of the games is always the final match, between the top team of robots and some talented amateurs.

But beating humans at the sport is a means, not an end, Veloso says matter-of-factly. The real goal, she says, is to hone both robots and roboticists. After all, robots that serve an accurate pass could also serve lunch. “The idea is to push robots well beyond the playing field and into daily life," she says. She has been instrumental in establishing the new RoboCup@Home, RoboCupRescue, and RoboCup@Work competitions, which test robots in realistic domestic, disaster, and industrial settings.

“Manuela practices a truly holistic approach to robotics," says Stefan Zickler, a robotics software engineer at iRobot in Bedford, Mass., whom Veloso advised while he was earning his Ph.D. Instead of focusing on one narrow area of research, he says, Veloso always takes in the big picture, and she urges her students do the same. Zickler says her broad outlook and tough honesty transform students into well-rounded, capable researchers.

In her pursuit of autonomous machines, Veloso prefers functionality over form. CoBot is a perfect example. It's not fancy: no limbs, just a tablet computer, a camera, and a bunch of sensors trundling around on a stool with wheels. But it can autonomously navigate a changing environment rife with unknowns, such as out-of-place chairs and half-open doors—no-brainers for people but difficult for most robots.

So when it gets stumped, CoBot employs a simple yet brilliant strategy: It asks for help. When it's faced with, say, having to press an elevator button, it seeks out the closest human for assistance. Veloso calls this concept “symbiotic autonomy."

Just as she envisioned robot soccer as a powerful vehicle for inspiring a new generation of roboticists, Veloso also sees the great potential for CoBot and other thinking machines to one day help humans at the office, on the shop floor, and in the home. It's a work in progress, and probably always will be, explains Veloso. “The beautiful thing about AI and robotics is that you're never done."

Prachi Patel is a freelance writer based in Pittsburgh and a contributing editor of IEEE Spectrum.

An abridged version of this article appeared in print as “RoboCup's Champion."