Life as a Bionic Woman

A brain implant offers relief to an epilepsy patient 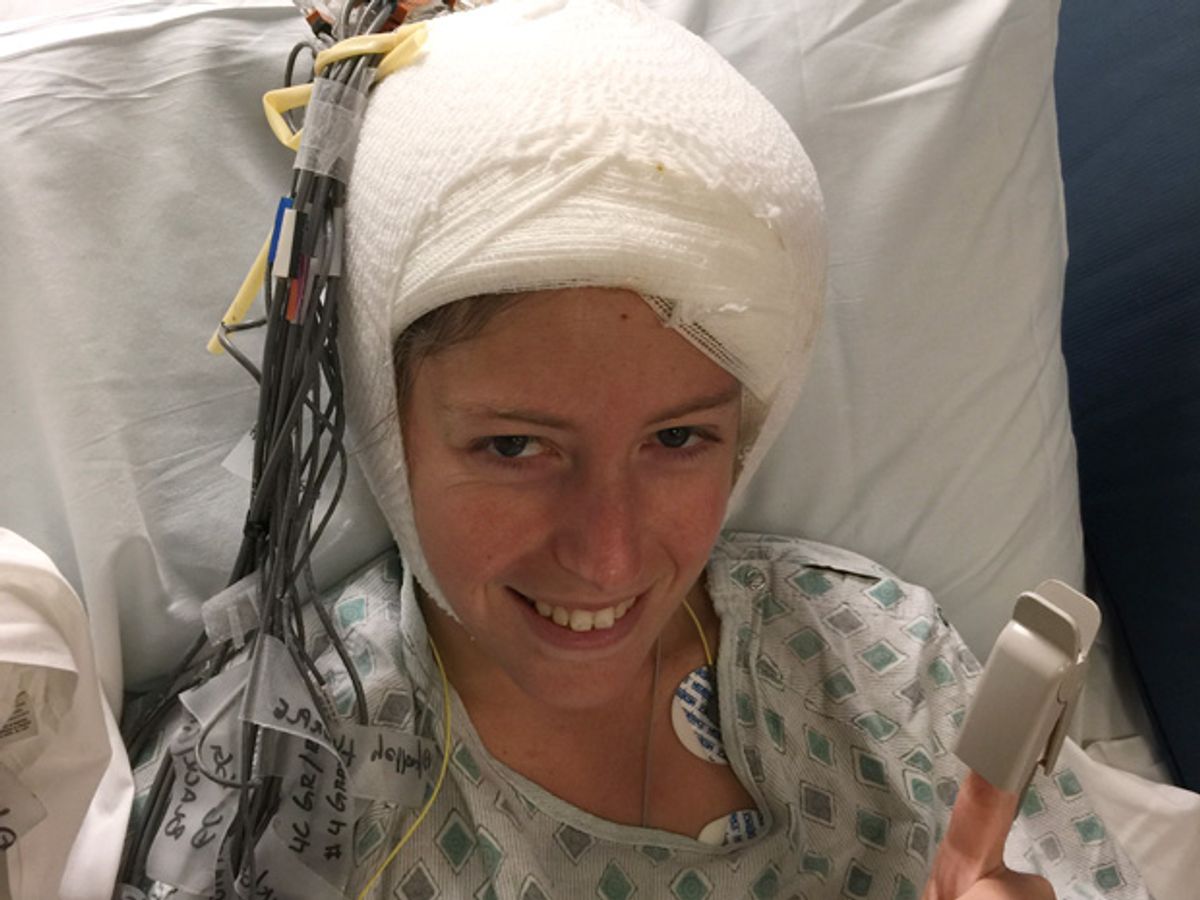 Chelsey Loeb says she’s still getting used to her new cyborg life. In November, neurosurgeons implanted a stimulator in her brain to treat her intractable epilepsy, and doctors turned on the device a few weeks later. She can’t feel the electrodes that routinely send pulses of electricity into her left temporal lobe, but she often thinks about her new internal hardware: “It’s like I have an iPod in my head,” she says with a smile. One night, when she heard a mysterious beep in her darkened bedroom, her first thought was, “Did my head just beep?”

It hadn’t. Loeb’s responsive neurostimulator (RNS System), described in the accompanying article, does its work quietly. The device constantly records the electrical activity in specific areas of Loeb’s brain, scans for the signature of an approaching epileptic seizure, and then triggers a burst of stimulation. The idea is to interrupt the abnormal activity before it can spread across her brain and interfere with her movements, mood, memory, and cognition.

The 26-year-old Loeb has been on medication to control her seizures since age 15. (Disclosure: Loeb’s father, Matthew Loeb, was formerly an IEEE staff executive.) Last summer the efficacy of those pills began to decline. Almost every day was interrupted by a seizure, in which she’d seem to zone out, become incoherent, and then regain awareness with no memory of what had occurred. These blank spaces were alarming. For example: What had happened in those few minutes after she started to feel strange at a pharmacy counter and before she came to her senses next to a dumpster in a parking lot? Loeb had to give up her driver’s license, and she took a disability leave from her job as a preschool teacher in Paterson, N.J.

In search of a solution, Loeb came to the epilepsy center at New York University Langone Medical Center. Doctors there recommended the new NeuroPace RNS System, which had been on the market for about a year. Loeb’s case required two surgeries. First, surgeons draped temporary electrodes over the surface of her brain. For five days, she sat in a hospital bed with wires emerging from her head while doctors monitored the electrical patterns in her brain. “I wasn’t allowed to walk around at all,” she says. “I was literally plugged in.” Once the doctors had observed the pattern associated with her seizures, they implanted the neurostimulator in her cranium and guided its electrodes to the spots in her brain where her seizures begin.

Head Hardware: Then surgeons implanted the responsive neurostimulator (left), which emits pulses of electricity when it detects signs of a seizure. Once a day Loeb uses a wand (right) to extract device data, which is sent to her medical team. Photos: Matt Loeb

NYU neurosurgeon Werner Doyle is a pioneer of this technology; Loeb was the 17th patient he outfitted with a commercial neurostimulator. Doyle says the device takes advantage of the brain’s remarkable self-organizing ability. “If you shut the brain down and then turn it on again, which we can do with anesthesia, it reboots itself back to normal,” he says. “That’s what the RNS does, but locally rather than globally.” And if the brain is an operating system, he says, the malfunctioning part of an epileptic brain is an application that freezes. “The RNS reboots the application so you can use it again.”

Loeb has recovered well from the surgery. She’s had a few seizures since the procedure, but most have been minor, lasting just a few seconds and not interfering with her speech or memory. The device continuously records the electrical activity in her brain, and when Loeb feels a seizure, she swipes a magnet past her head to mark that moment in the data stream and flag it for examination. At her checkups, her doctors analyze the data and tweak stimulation parameters. “They’re figuring it out,” Loeb says. “Their goal is to have me be 100 percent seizure-free.”

The doctors’ work won’t just benefit Loeb. As her doctors learn how to better control her seizures with pulses of electricity, they’ll also be learning about the neural circuits that govern the human body. Doyle hopes that every time he implants electrodes into an epilepsy patient’s brain, he’ll get better at integrating the stimulator into the nervous system. “The more this device becomes like the brain, the better it will work,” says Doyle. “That’s the future.”