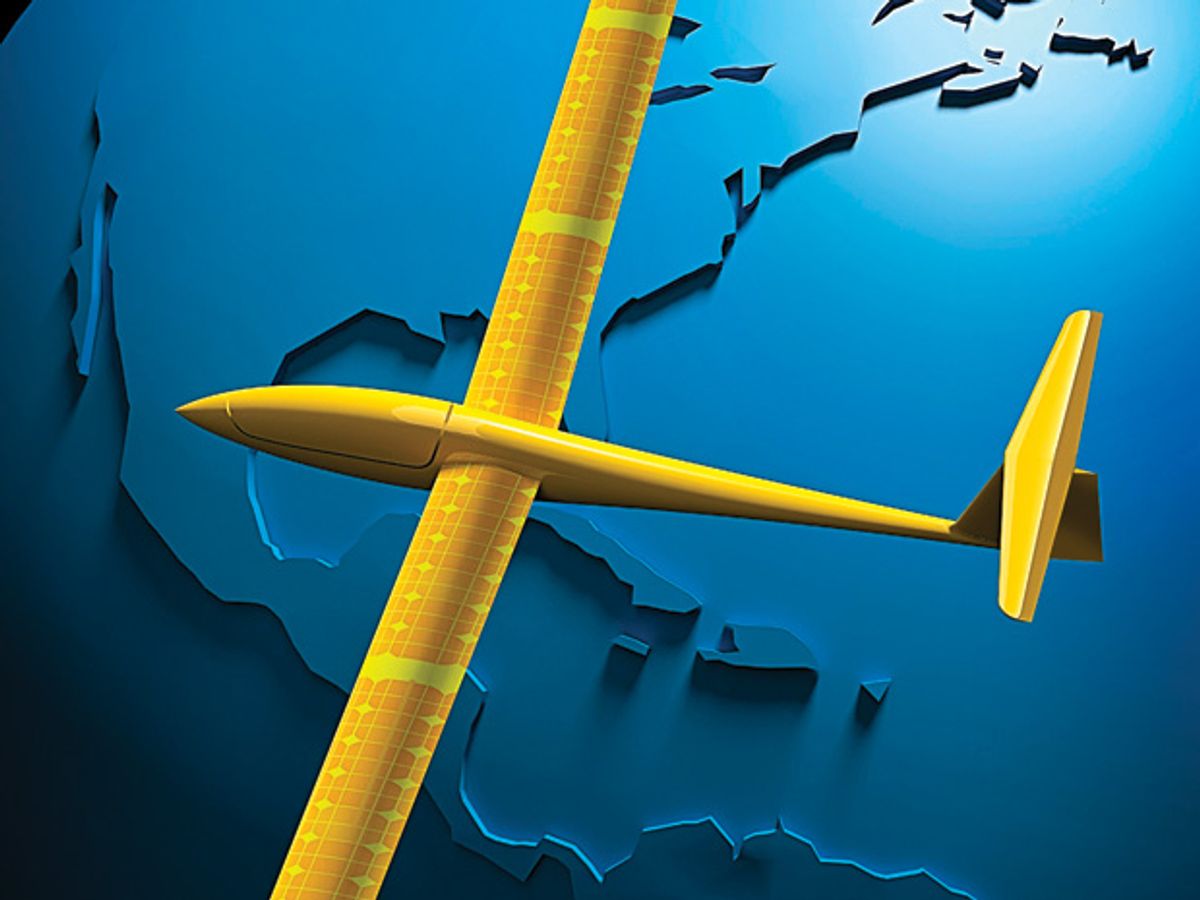 If you take the main road east out of Moriarty, N.M., turn south at a sign advertising glider rides, and then swing east again past the sailplanes ornamenting a two-runway airport, you will see hangar No. 76, the headquarters of Titan Aerospace. In this cavernous office-cum-workshop, engineers are developing the Solara—a line of solar-powered robotic airplanes capable of staying aloft for years at a time.

The first of these planes, the Solara 50, will be equipped with about 3000 photovoltaic cells covering a 50-meter wingspan—as long as an Olympic swimming pool. The aircraft is meant to carry a small payload to altitudes around 20 kilometers into the stratosphere, where the air is idyllically calm.

The Solaras and their ilk are sometimes called atmospheric satellites, because they could do many jobs that satellites do, including delivering broadband service and taking pictures from on high. But unlike stationary orbiters, these planes could be retrieved, upgraded, and reused. And because they could be bought and operated for a fraction of a satellite’s cost, they could take on other missions, such as patrolling national borders, monitoring the ozone layer, and expanding cellular coverage. The Solara 50 could be the first commercial product to provide these services.

“Trying to find a customer to sell this airplane to isn’t going to be a problem for us,” says Vern Raburn, Titan’s CEO. He expects engineers will test-fly the first full-scale models later this year. Provided there are no major hang-ups, he says, the plane should go on sale in 2015.

Titan isn’t the first company with such ambitions. In 1974, engineers at AstroFlight, a model airplane manufacturer in Irvine, Calif., guided the first robotic solar plane over a dry lake bed. In the 1980s, AeroVironment, now in Monrovia, Calif., claimed the first piloted solar flight and the first solar-powered crossing of the English Channel. With funding from NASA, the company pushed solar drones to greater and greater heights, ultimately achieving a 40-minute tour above 29 kilometers in 2001. And in 2010, the British defense firm QinetiQ proved the feasibility of long-duration flights by keeping its hand-launched Zephyr up in the air for two weeks.

Yet no company could commercialize a reliable system. Success was stymied by inefficient photovoltaics, limited battery capacity, and the fragility of the ultralight airframes, which can be easily battered while climbing through the atmosphere’s turbulent lower layers. “If you look at the history of these projects, you’ll notice almost all were destroyed because they flew through a little bit of weather,” says Kevin Jones, an aerospace engineer at the Naval Postgraduate School, in Monterey, Calif.

Raburn says that key technologies have now matured enough to bring such a plane to market. Solar-cell efficiency, for example, has climbed from 10 percent in the 1970s to around 40 percent today. Battery technology has made similar strides in energy density, packing in ever more joules per gram. Meanwhile, advanced carbon-fiber composites are enabling stronger, more durable frames. “It’s the classic confluence of technologies,” he says.

Jones agrees but says that although months aloft are doable, longer missions may still be a few years off. Even the best rechargeable batteries can be replenished only so many times before they stop holding enough charge to last through the night. “With lithium, getting above 200 cycles is challenging,” he says. That would limit flights to about six months. Some researchers believe that using fuel cells could extend flight time to several years.

Soon you’ll be able to stand in your backyard at dusk and spot them—twinkles of light floating at the edge of the atmosphere. At long last, the eternal aircraft may be within reach.

This article originally appeared in print as “Solara Takes Off.”

Apple introduces another generation of OLED-only phones, potentially shutting out the flicker-sensitive

The new iPhone 13 in various colors.

Tim Cook is "so excited for iPhone 13." I'm not, because yet again, Apple's latest and greatest tech sits behind an OLED display. And OLEDs, for some of us, cause nausea, headaches, or worse. I explain why Apple's OLED displays, that dim by flickering on and off rather than by voltage adjustments, trigger health issues here.

The iPhone 13 series, launched Tuesday, has cool video features, like automatically changing focus on the fly. The phones have longer battery lives. They have better processors.

Craig S. Smith is a former New York Times correspondent and host of the podcast Eye on AI.

China and the US are in a race to conquer quantum computing, which promises to unleash the potential of artificial intelligence and give the owner all-seeing, code-breaking powers.

But there is a race within China itself among companies trying to dominate the space, led by tech giants Alibaba and Baidu.

Designed to mitigate the worst effects of fires, fire retardant materials play a particularly important role in aircraft construction. Used in aircraft, epoxies and silicones must maintain their primary role as adhesives or coatings while exhibiting resistance to heat and flame in accordance with government and industry specifications.

Master Bond's series of flame retardant epoxies and silicones comply with specifications for flame resistance and reduction of smoke density and toxic emissions.

The Surprising Story of the First Microprocessors