How Is This a Good Idea: Car Dashboard Video Games

Vehicles are not toys; keep games were they belong 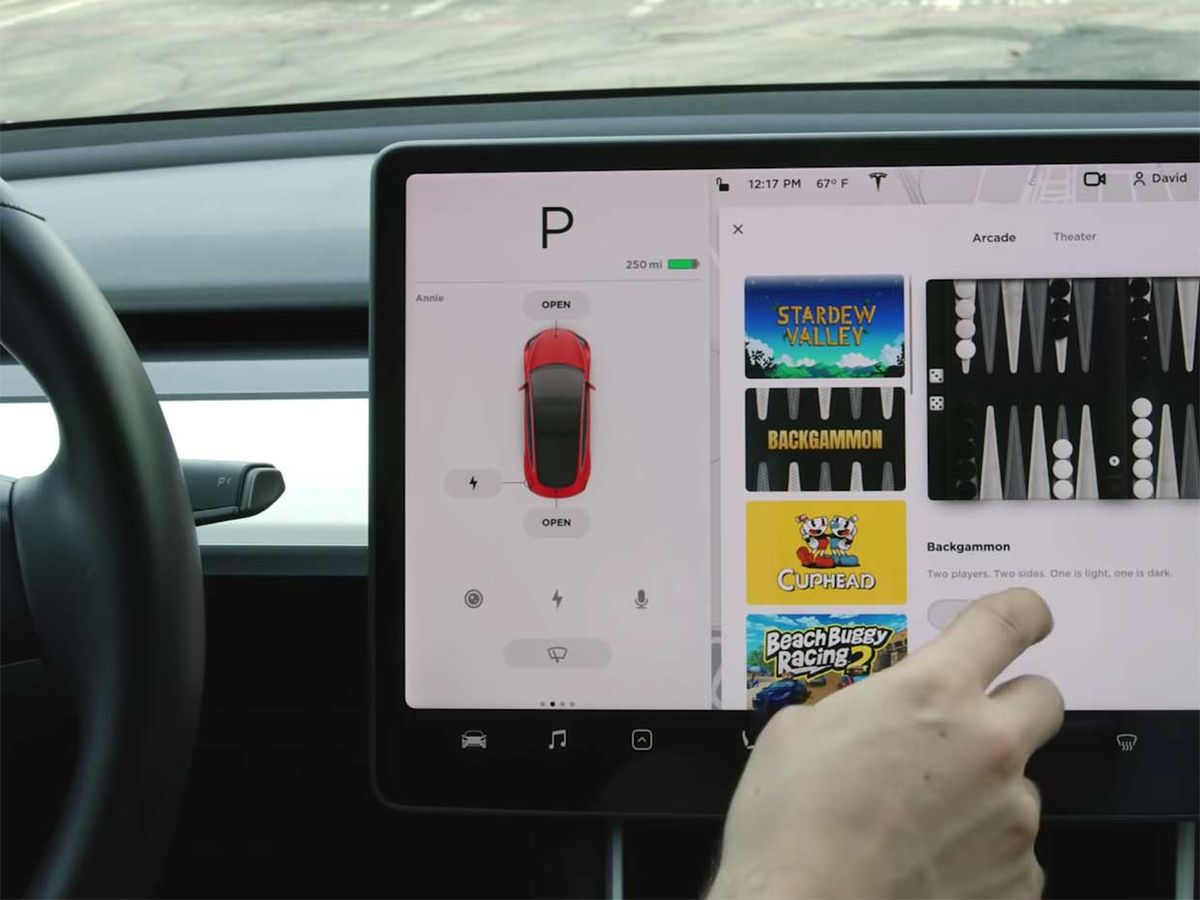 Elon Musk now tweets his interest in developing video games for a car in motion. Could these games above, meant only for a parked Tesla, be setting an ill-considered precedent?
Image: Tesla
automotive gadgets EVs Tesla Motors video games

Modern cars have become just another computer peripheral. Internally, a host of embedded processors handle tasks that range in complexity from rolling windows up and down to something close to autopilot. Externally, wireless smartphone connections allow a driver to monitor their car’s performance and send remote instructions to warm up the vehicle or unlock the doors.

So why not lean into the computery nature of the modern car and use it for more than just driving around? Don’t take yourself so seriously: Use this machine, when safely parked, for having some fun. That appears to be the logic behind the notion of using the car dashboard screen—and often the steering wheel—as a platform and interface for video games.

These car-based games fall into three broad categories: Those that use a car’s center touchscreen for casual gaming recreation while the car is parked; those that co-opt the cars’ controls in some way, so that, for example, a virtual racing car can be controlled by a real steering wheel, also while parked; and finally, the as-yet-not-implemented idea that augmented reality and other games could be integrated into the active driving experience.

The first category falls into the domain of “harmless if somewhat pointless.” Looking at the games already on offer in Tesla cars, many of them are ports of classic Atari arcade titles such as Missile Command and Centipede, although some more recent games such as Cuphead, Fallout Shelter and Beach Buggy Racing 2 have also been adapted. These are intended to allow a driver to kill some time while parked, at an EV charging station perhaps (a longer and more passive experience than popping into a gas station to fill a tank).

But anyone who is driving a Tesla is going to have a much better piece of hardware to play games already on hand, in the form of their smartphone. Admittedly, a phone’s screen is much smaller than the Tesla’s display, but the phone has the advantage that it has a vastly larger selection of titles and can be played in the hands, rather than requiring the driver to extend their arms to play. I expect that the best use case for this category of game will prove to be in the least flashy games—chess and backgammon—where a driver and passenger might use the screen as board to play against each other. Otherwise, it all feels like a feature for a feature’s sake, good for a flex while showing off a new car, but not much else.

The next category of games—those that use a parked car as a glorified controller—edges into more dubious territory. The fundamental issue is that cars are not just another peripheral. They are heavy machinery. The non-profit National Safety Council estimates that in the United States, 38,800 people lost their lives due to car crashes in 2019, with another 4.4 million suffering serious injury. While there are no good statistics for deaths caused by, say, accidents involving laser printers, I’m willing to bet it’s a much, much smaller number. Until autonomous driving technology is good enough to take humans out of the loop entirely—so called Level 5 autonomy—drivers hold life and death in their hands every time they sit behind the wheel.

This may seem like a moot point if the games can only be played while the car is parked. But the same controls previously dedicated to the licensed operation of a car are now also used for consequence-free light entertainment.

In user experience terms, having the same input produce different outputs is known as a mode-based or modal interface. Popular in the days of computing when interactive input was often limited to the channel of a single keyboard, modal interfaces have since fallen out of favor. This was in large part because users tended to make so-called mode errors, where the user’s mental model of the system falls out of sync with the actual state of the system—something known as mode confusion. And they sometimes issue inappropriate commands in the belief that they’re using a different mode.

Mode confusion is irritating if you, for example, accidently delete a file while working at a computer. But it can be lethal when it happens elsewhere. For example, a number of aviation accidents have been caused by pilots making mode errors with controls in the cockpit.

Tesla Arcade does lock out some driving controls when playing a game: pressing the accelerator, for example, produces a warning notice. But turning the steering wheel to control a game car still also turns the wheels of the real car. It is easy to imagine a scenario where somebody parks their car with the wheels aligned straight ahead, then becomes immersed in a racing game while their partner runs an errand. Their partner returns and gets back in the passenger seat. The driver immediately turns off the game, starts the car and begins to back out—forgetting that the last thing they were doing in the game was taking a sharp curve. So instead of reversing straight back out, the wheels are set so the cars turn into another vehicle—or a pedestrian.

The next proposed category of in-car gaming, where the game is tied into the active driving experience, is even more worrisome. In May, Elon Musk mused on Twitter about the possibility of having something like the augmented reality hit Pokemon Go running on Teslas. Whether any such game is played using an in-car display or some kind of heads-up display, the issue is that it will be inevitably adding to the driver’s mental load, raising the likelihood of distraction at a critical moment.

There have been some very public incidents where drivers, lulled into a false sense of security by autonomous driving systems, have become so distracted as to be practically somnambulant: A pedestrian crossing the road was killed during a 2018 Uber autonomous driving road test in Arizona, and a driver’s overreliance on a Tesla’s autopilot system got him killed when a truck failed to yield properly in 2016. But it doesn’t take the latest in AI technology to beguile drivers.

Safety experts have previously raised concerns about common in-vehicle information systems, which are intended to help drivers with navigation, provide audio entertainment, or support hands-free phone calls or text messaging. A 2017 report by the AAA Foundation for Traffic Safety warned that many such systems already place excessive visual or mental demands on drivers. The truth is that we are simply not as good at multitasking as we like to think we are. And every additional task we try to perform simultaneously—such as completing a game objective while also paying attention to traffic—pushes us closer to a condition that accident investigators refer to as task saturation.

As a person reaches task saturation, their situational awareness becomes more and more spotty, and they can end up simply ignoring critical warnings, or become incapable of completing all the things they need to do in time to avoid disaster. And given that every game designer’s objective is to grab and hold our attention, it’s not much of a stretch to imagine that actively playing a game while driving would make more mental demands than using, say, a satellite navigation display.

So let’s keep the games where they belong—away from steering wheels and actual car dashboards.