When you're at the peak of the hype cycle, there's just one way to go--down. Then you bounce back again. 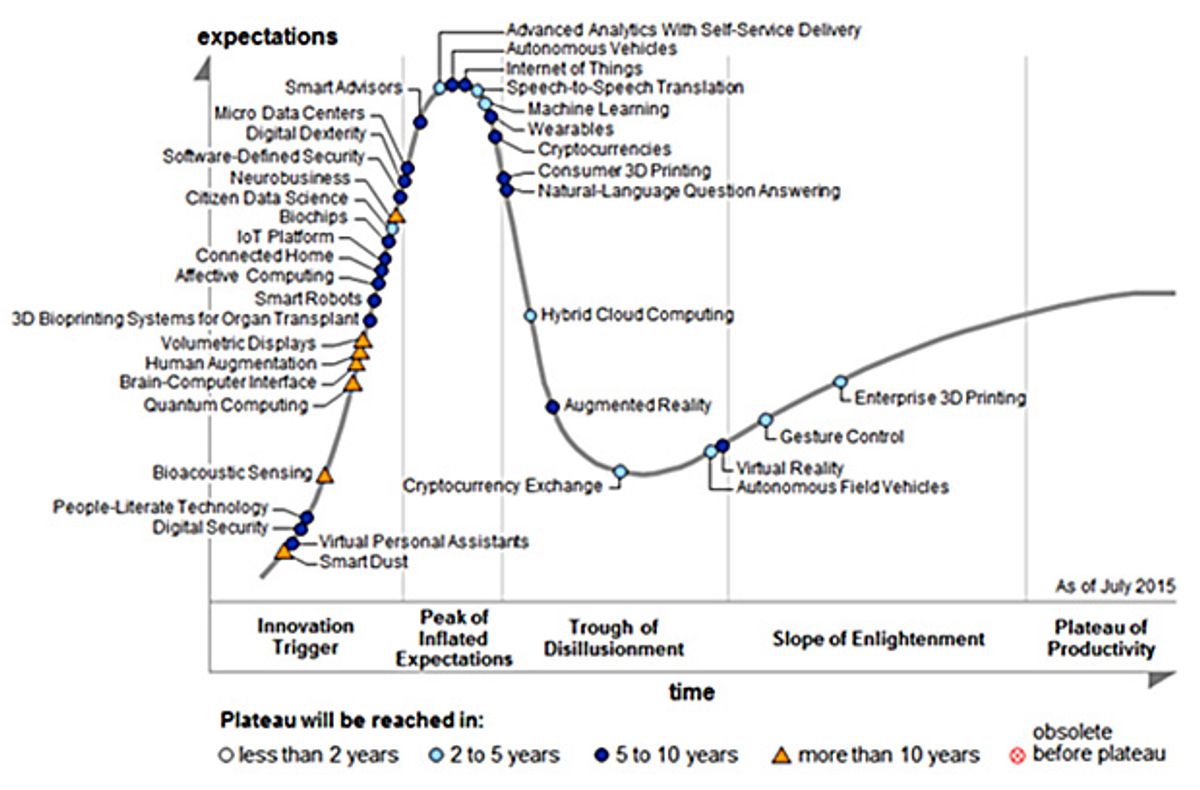 Autonomous vehicle technology is now at the peak of its “hype cycle,” according to Gartner, the technology research firm that coined the phrase.

You might interpret this as investor-speak for “it’s time to sell your stake,” but that’s not quite right. Gartner’s point is to chart the rise and fall of expectations for the future. Being the object of peak hype is no shame—though it’s no great honor, either. It happens to every technology. But after peak hype comes what Gartner calls “trough of disillusionment,” a Pilgrim’s-Progress-like phrase for the place where marginal players fall off the bandwagon.

The cycle is composed of two graphs.  The first is an up-and-down line plotting rising and falling expectations due to hype and disillusionment. The second is the familiar S-shaped curve of technology acceptance, which accumulates as a minority of early adopters are joined by a majority of more conservative types, and finally by a minority of laggards--those with the lowest appetite for technological risk. It was proposed by Everett Rogers, the sociologist who coined the phrase “early adopters.”

In 2010, barely a year after Google began talking up its experimental self-driving car, Gartner pegged the technology about halfway up the the initial climb. It inched up every year thereafter. Big auto makers--fearing for their fortunes—began running self-driving programs, like the one that produced the 2014 Mercedes S Class. They were followed by the smaller auto companies, then by the suppliers. Now Uber, a ride-hailing app, and even Apple, the mother of all apps, are apparently building autonomous cars.  Who’s next—McDonalds?

There are a few nits to pick with Gartner’s methodology. It presumes all technologies have a similarly shaped life cycle, though some obviously shoot up fast only to stagnate (nuclear energy), others grow slowly but grow long (solar voltaics) or fast followed by fast (Moore’s Law).  And it presumes to beat the market at its own game: predicting the future. But that’s what research firms are paid to try to do.

It’s harder to pick on particular technologies. For example, in the very first Gartner chart, in 1995, wireless communications were already halfway up the hype hill; in 2000 wireless reached peak hype, and thereafter it no longer appears (except as subsets of its original self, such as Bluetooth). Reason: wireless was no longer in the future—it was in most homes and businesses.

Or take augmented reality, which was halfway up the hype hill in 2005, well down the other side in 2012—but it’s still not an established technology.

Gartner’s fixed track of takes no account of seemingly fizzled technologies that finally stage a comeback. Electric cars seemed full of possibility a hundred years ago, then they didn’t, now they do again. In mid-Victorian days, Charles Babbages’ digital computers were a thing, then they weren’t, and now—now they’re the beating heart of the world.