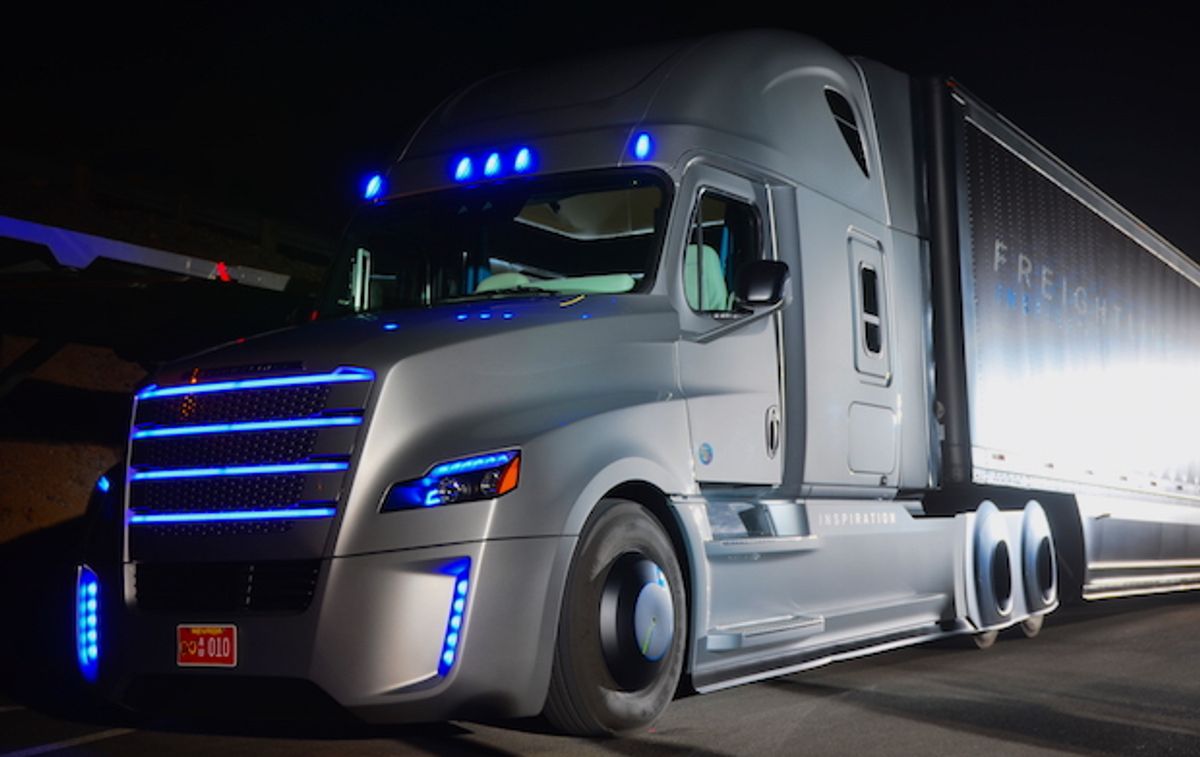 Last night, Freightliner introduced the world to its Inspiration truck, a prototype for the first semi-truck capable of fully autonomous highway driving that's been officially licensed to operate on public highways in Nevada.

We were at the spectacular unveiling event, and today, we'll be at technology and policy workshops. We've also been promised live demos and a ride-along. We'll bring you videos and plenty more technical details in an upcoming post, but we have a lot of info from Freightliner right now, so let's take a look at the future of trucks. And by future, we really mean present, because this truck is driving autonomously on public roads right now.

First, let's go over the highlights of what was announced. Freightliner's Inspiration truck is able to drive itself completely autonomously on well maintained highways, in daylight, and in good weather. A licensed human driver is required to be behind the wheel, and the human will need to take over in some highway situations and whenever the truck is driving on surface streets. But crucially, and this is what's so important about the Inspiration truck, while the truck is on the highway the driver does not have to be paying attention. It's probably not a good idea for the driver to be asleep in the back, but he or she can be doing other work, reading, watching a movie, or playing Angry Birds.

The second important item that was announced along with the truck itself is that Nevada has granted the Inspiration the first license for an autonomous commercial truck to operate on an open public highway in the United States. This isn't a provisional or testing permit: it's a license that's just as valid as the one that you probably have, and the Inspiration is allowed to drive itself autonomously on the highway right behind you if it wants to. Freightliner performed over 16,000 kilometers of testing on the Inspiration truck to get this license, and both the company and the state of Nevada are convinced that the truck is reliably safe.

The Inspiration truck operates at Autonomy Level 3, which means that it can take full control from a human driver under some conditions, but that the driver still needs to be able to take over when the system needs help. These automation levels are defined by the U.S. Department of Transportation's National Highway Traffic Safety Administration (NHTSA), and here's the entire range, from full manual control (Level 0) to full autonomy (Level 4).

No-Automation (Level 0): The driver is in complete and sole control of the primary vehicle controls—brake, steering, throttle, and motive power—at all times.

Function-specific Automation (Level 1): Automation at this level involves one or more specific control functions. Examples include electronic stability control or pre-charged brakes, where the vehicle automatically assists with braking to enable the driver to regain control of the vehicle or stop faster than possible by acting alone.

Combined Function Automation (Level 2): This level involves automation of at least two primary control functions designed to work in unison to relieve the driver of control of those functions. An example a Level 2 system is adaptive cruise control in combination with lane tracking.

Limited Self-Driving Automation (Level 3): Vehicles at this level of automation enable the driver to cede full control of all safety-critical functions under certain traffic or environmental conditions and in those conditions to rely heavily on the vehicle to watch for changes in those conditions that would require transition back to driver control. The driver is expected to be available for occasional control, but with sufficiently comfortable transition time. The Google car is an example of limited self-driving automation.

Full Self-Driving Automation (Level 4): The vehicle is designed to perform all safety-critical driving functions and monitor roadway conditions for an entire trip. Such a design anticipates that the driver will provide destination or navigation input, but is not expected to be available for control at any time during the trip. This includes both occupied and unoccupied vehicles.

Specifically, the Inspiration truck will follow GPS directions, maintaining safe and efficient (and legal) speeds, staying in its lane, and slowing or stopping or speeding up as necessitated by traffic conditions. It won't change lanes to pass, however.

At this point, the Inspiration truck is limited to highway operation only, and only in daylight and good weather. Freightliner is actively working to make it more versatile, but we're told that the truck can tell when things start to get too much for it to handle, like if the weather changes or it needs to exit the highway. In these cases, the truck will use visual and audio alerts to prompt the human driver to take over, and if they don't, the truck will gently bring itself to a stop. We're hoping to get some experience with that today. We'll also get as much detail as we can on sensors and software, but here's an overview:

It also sounds like Freightliner has been working on platooning, where a bunch of Inspiration trucks can sync up and drive very close together to maximize their efficiency:

Only two of these Inspiration trucks exist right now, which limits platooning a little bit, but there's a lot of potential there, especially if passenger cars could be worked into the system somehow. But we're getting greedy.

So let's talk about why autonomy is so important for trucks. The most obvious reason is safety: currently, 90 percent of truck accidents are the result of driver error, often because drivers stop paying attention or get drowsy. An autonomous vehicle is paying attention all the time, and when Freightliner measured the brain activity of drivers, drowsiness actually decreases by 25 percent when the truck is operating in autonomous mode.

For the driver, not having to be focused on the monotonous task of driving the truck frees them up to do other thing that are more interesting. To be clear, while the Inspiration truck is autonomous, it's not intended to be driverless, and a human will still be an integral part of the overall system for the foreseeable future. Freightliner predicts that by 2050, the amount of global freight handled by trucks will triple, and considering that there's already a shortage of qualified drivers, efficiency will be critical. It's even possible that, in its current incarnation trucks could drive point-to-point on highways and then park themselves in designated lots, waiting for humans to do the complicated final drive on variable and unpredictable surface streets. This is what humans are good at, and sitting behind the wheel and driving in a more or less straight line at a constant velocity for hours on end is a waste of our talents.

Just a quick word about the unveiling event, because it was bananas: Freightliner rented the Hoover Dam (!) and pointed an array of sixty 26,000 watt projectors at it, creating a movie screen with an area of about 39,000 square meters, which is approximately the same size as nine football fields or 87 IMAX screens. The total light output was 1.17 million lumens, and as of last night, Freightliner's 30 minute video presentation holds the world record for highest light output projection ever. Whoa.

Today we've got a packed schedule, which includes workshops on technology, regulations, and safety, as well as some drive time with both the Inspiration truck and the SuperTruck that we wrote about last month. If you've got any specific questions for Freightliner, leave a comment below, and we’ll do our best to get you an answer.

self driving industrial robots self-driving trucks inspiration truck supertruck freightliner inspiration
Evan Ackerman
Evan Ackerman is a senior editor at IEEE Spectrum. Since 2007, he has written over 6,000 articles on robotics and technology. He has a degree in Martian geology and is excellent at playing bagpipes.
The Conversation (0)
Type Analysis Topic Energy