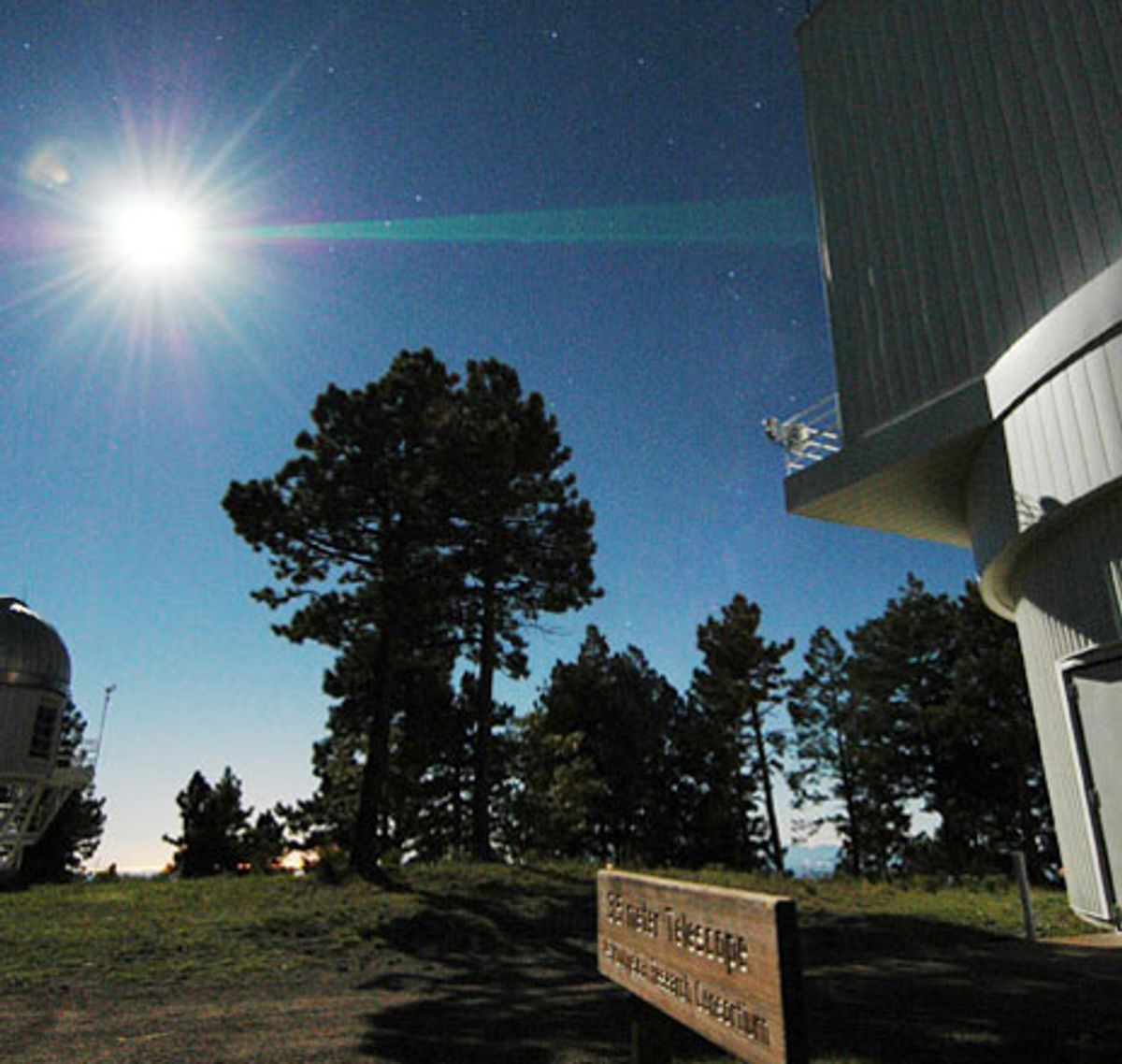 Sitting at his home computer on the evening of 22 April, Tom Murphy, an astrophysicist at the University of California, San Diego, logged into an observation session 1200 kilometers away, at Apache Point Observatory. From a pine-dotted ridge above the White Sands Missile Range, Russet McMillan, the on-site specialist, aimed the New Mexico observatory's telescope at a small patch of dust near the edge of the moon's face. Then, at Murphy's go-ahead, she fired a stream of laser pulses into the night sky.

The pulses—20 per second—shot toward the moon and, after little more than a second, bathed the lunar dust patch in a pool of green light. Another second passed. Then Murphy saw a blip in the data on his screen. It suggested that an unusually large number of photons had returned from the moon and were being recorded by the telescope's photodiode.

At first, Murphy thought the blip might just be an artifact of the instrumentation, a common disturbance caused by turning the detector on and off. But no matter how McMillan tweaked the instruments, the signal kept showing up. By the next morning after analyzing the data, he was sure the blip represented something much more significant: contact with the first robot to roam a surface beyond Earth. Until NASA's Lunar Reconnaissance Orbiter snapped photographs of the robot's tracks earlier that month, no one had been able to locate the Soviet rover Lunokhod 1 for nearly four decades.

But the discovery has turned out to be more than a just a fun bit of space archaeology. Now that Murphy has confirmed the location of Lunokhod 1, he plans on using the aging rover to help measure the moon's movements and test theories of gravity with the greatest precision to date.

In November 1970, more than a year after the United States' Apollo 11 mission, Soviet engineers sent Lunokhod 1 to the moon aboard a probe named Luna 17. Powered by solar cells and equipped with radio antennas, cameras, and a dust-sampling scooper, Lunokhod 1 had the appearance of an otherworldly creature. "It looked like a metallic washtub with a dome top and wire-mesh wheels," says Cathleen Lewis, a curator at the National Air and Space Museum in Washington, D.C.

The rover, whose name translates to "moon walker," rolled down a ramp onto the moon, "thus taking the first giant step for robotkind on another celestial body," Time magazine reported the following week. Soviet engineers "made much of the fact that they were pioneering robotic exploration as opposed to human exploration," Lewis says. (Due to the success of its manned programs, NASA wouldn't have its own remote-controlled rover until Sojourner rolled onto Mars in 1996.) For 11 months, Lunokhold 1 toured the moon, sampling lunar soil and beaming thousands of images back to Earth.

But each lunar nightfall, which happens about every 29 Earth days, the sun-powered rover shut down. "That kind of thermal cycling is really tough on electrical and mechanical parts," Murphy says. "So every morning when they'd get a new sunrise on the moon, [Lunokhod's operators would] hold their breath and hope that the thing would power up and start working again. And month after month it did. Then one day, some component somewhere failed, and Lunokhod just didn't wake up."

Astronomers hoped that the lifeless robot would still be useful for scientific experiments. On its domed back, Soviet engineers had attached a French-built array of "retroreflectors"—corner-shaped glass prisms that bounce photons of light back to their source. "It's just like if you're playing racquetball and you hit the ball into the corner of the court: It comes right back at you," Murphy says. Neil Armstrong had planted a similar array on the moon during the Apollo 11 mission, and scientists began using it to do the same kind of laser-based measuring, known as lunar laser ranging, that Murphy is now doing from Apache Point.

The Soviets had imprecise coordinates for the final path of Lunokhod 1, and neither observers in the United States nor those in France could find its last location. Soon, Apollo 14 and 15 delivered two more reflectors to the surface in 1971, and Luna 21 later added a fourth on the back of a rover named Lunokhod 2. With multiple easy targets available, trying to locate Lunokhod 1 no longer seemed worth the effort. "We found Lunokhod 2 within 15 minutes the first night we tried," says Eric Silverberg, who led lunar laser-ranging experiments at McDonald Observatory at the University of Texas from 1969 to 1982. "We had a full plate as far as using telescope time, and we didn't have a lot of stomach for unproductive evenings chasing this Lunokhod 1," he says.

In 1969, astronomers at the first laser-ranging observatories could measure the distance between the surfaces of the Earth and moon to a precision of 40 centimeters. Ranging to multiple reflectors allowed them to locate the moon's center of mass and track where it traveled. The data was used to verify some of the predictions of general relativity, at least to a certain level of error. But the precision of laser ranging was limited by technology.

By measuring how long it takes for a photon to travel to the moon and back, scientists can calculate the distance it travels. In 2005, Murphy set up a new lunar laser-ranging operation at Apache Point that has much greater sensitivity than other observatories. The laser there has a peak power of about a billion watts, but because the Earth's atmosphere distorts light traveling through it (both on the way to the moon and on the way back), most photons miss their target. For every 1018 photons shot at the moon, only a single photon returns to the telescope. So it's important for laser-ranging systems to count almost every one.

The Apache Point Observatory is "far more capable" than its predecessors, says Silverberg. "I'm not sure previous stations could've found the thing even given the right position." Older observatories detected about one photon per 100 pulses, but because the telescope at Apache Point has a wide aperture and sits at a high altitude, it detects one returning photon for nearly every laser pulse.

Murphy suspected that such superior capability might allow him to find the long-lost rover, and he decided to devote just a small percentage of telescope time to test this whim. At first, his attempts to locate the rover were fruitless. Because of atmospheric divergence, the laser pulse forms a beam footprint on the moon of 2 km. He later found out that he was working with coordinates 4.5 km off target. Then, in March, NASA's Lunar Reconnaissance Orbiter beamed back photographs of the Russian lunar landers Luna 17 and 21. "It was really fantastic imaging," Murphy says. "You could even see the rovers' tracks. You could trace out where they went and what their journey looked like."

Because Lunokhod 1 rests on the edge of the moon's face rather than near its center, as the other reflectors do, it's a better target for measuring the wobbles of the moon that result from tidal forces. And the reflection on Lunokhod 1 is much brighter than that of its successor. Murphy can even range to it during lunar daylight—an impossible feat with the feeble signal from Lunokhod 2.

With Lunokhod 1 now part of his network of reflectors, Murphy continues to make measurements of the Earth-moon orbit. From many observations and theories, it seems that our understanding of gravity is incomplete. Previous laser-ranging efforts have measured the shape of the moon's path around the Earth with centimeter precision, and those measurements confirm that general relativity accurately predicts the lunar orbit at this resolution. Murphy is now testing those predictions down to one millimeter, to see if the current theories break down in those circumstances. "Testing gravity is hard," he says, "and the solar system offers our most pristine laboratory for carrying out tests of gravity to exquisite precision."