CREATE AN ACCOUNTSIGN IN
SemiconductorsTopicTypeNews

To the Moon: A lander by Moon Express is one of five contenders for a US $20 million, 380,000-kilometer race that could end this year.Illustration: Moon Express

After nearly 10 years and multiple deadline extensions, the moon seems to be coming into focus for competitors in the Google Lunar XPrize.

Five finalists will have until 31 December to leave the launchpad in pursuit of the US $20 million top prize, which will go to the first team that lands a vehicle on the moon and completes a set of mission requirements, including moving at least 500 meters across the surface and transmitting ­high-definition video back to Earth.

Expect to see teams gearing up to launch in the last quarter of 2017, says the competition’s senior director, Chanda ­Gonzales-Mowrer: “We’re really in the final stretch now.”

Each of the finalists has a signed launch contract that has been verified by Google Lunar XPrize. Three have secured spots on well-established launch vehicles. SpaceIL, an Israeli nonprofit, will use a SpaceX Falcon 9 to get off the ground. Bangalore-based TeamIndus has secured a berth on a Polar Satellite Launch Vehicle (the PSLV-XL), operated by the Indian Space Research Organization. TeamIndus will carry a rover from Japanese competitor Hakuto with it.

The two other finalists have placed their bets on untried prospects, firms that are aiming for low-cost launches that, as of press time, have yet to reach orbit. The international team ­Synergy Moon’s ride is with Interorbital Systems, a California-based firm developing modular launch vehicles. And Moon Express, a U.S. team building a business in lunar resources development, has penned a three-launch agreement with Rocket Lab, based in the United States and New Zealand. The company has a two-stage launch vehicle called Electron that’s designed for small payloads. Rocket Lab says it hopes to start orbital test launches of Electron soon. 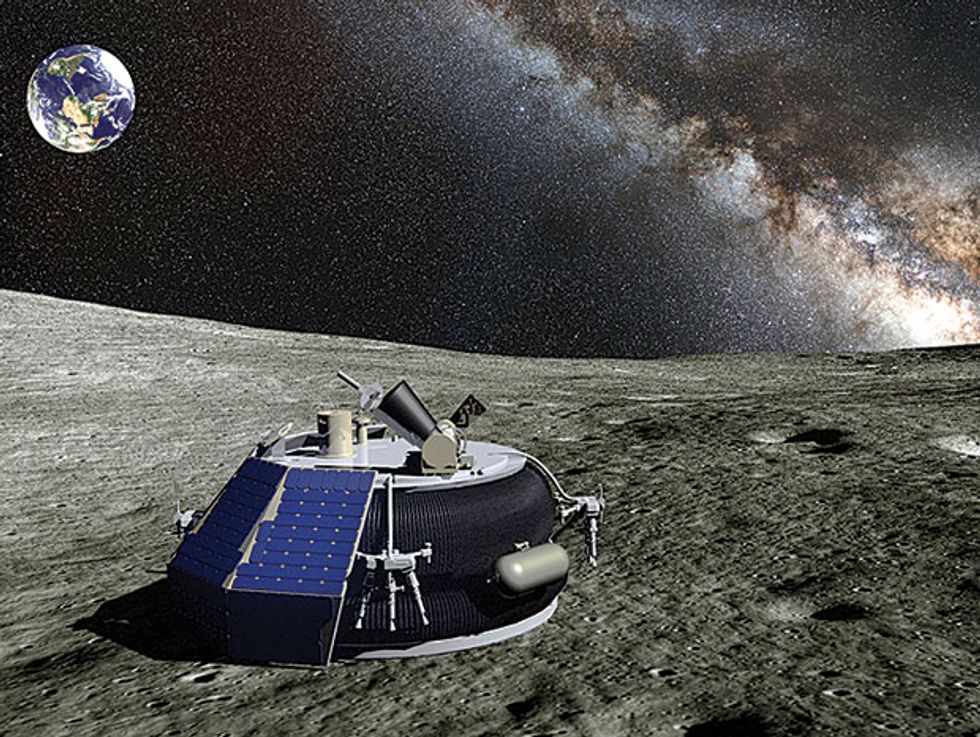 Moon Express (United States)
Launch vehicle: Rocket Lab Electron
The XPrize is only part of the plan for Moon Express, which aims to build a business around lunar resources. It plans a series of launches with the new Electron rocket. Moon Express aims to use its lunar lander’s thrusters to “hop” to the finish.

The teams are taking different approaches to fulfilling the prize requirements. Some are building rovers to traverse the requisite 500 meters. Others hope to use their lunar landers to cross the distance, by firing thrusters to make a “hop.” In the coming year, Gonzales-Mowrer says, teams will work closely with the XPrize organization to determine how judges will affirm that prize requirements have been met.

But the first step is getting off the ground, and it could be a tight race to leave the launchpad by the end of the year. So far, only TeamIndus has announced a specific launch date: 28 December, just three days shy of the deadline. “The teams are under a considerable amount of pressure,” Gonzales-­Mowrer says, and there are no plans at present to extend the deadline.

The Google Lunar XPrize has already been extended multiple times, most recently from 2015 to 2016 and then again to the end of this year. The extensions have helped teams handle what has turned out to be one of the most difficult aspects of the competition: raising the money. “Funding has been a challenge for teams from the very beginning, and it will continue to be until the end,” says Gonzales-Mowrer.

A mission can easily cost more than the top prize. SpaceIL, for example, estimates its mission will cost $70 million. So far the team has raised $50 million of that total, but SpaceIL member Elana Lichtenstein says the team is confident it will be able to make up the difference.

As it can appeal to a higher purpose, SpaceIL may have an easier time than others raising funds for its mission, says Lichtenstein: “We’re asking people to make a social and emotional investment in STEM [science, technology, engineering, and math] education for the future of Israel.” So far, the team estimates that its educational outreach efforts have reached 250,000 students. It hopes to double that total by the end of this year.

As with other teams, SpaceIL is still readying its spacecraft, which is being built at an Israel Aerospace Industries facility. The team’s launch contract is for a six-month window that extends into 2018. If it can’t make the 2017 deadline, SpaceIL still aims to go to the moon: “We have an educational mission that we are intent on achieving that has little to do with the time frame of the competition,” Lichtenstein says.

Some teams that were expected to advance to the final round did not. The Germany-based group Part Time Scientists, for example, announced last year that it had secured a launch contract. But the team did not meet the prize requirements, because its launch did not have the potential to occur before the 2017 deadline, Gonzales-Mowrer says.

Longtime front-runner U.S.-based Astrobotic Technology is also missing from the list of finalists. The team withdrew from the competition, explaining that the prospect of rushing to make the XPrize deadline conflicted with the company’s goal of building a sustainable, long-term business. The group now aims to fly its first mission in 2019.

This article appears in the March 2017 print issue as “Finish Line Looms for Google Lunar XPrize.”

When AI “Played” Math, It Cracked an Internet Chokepoint

Who Will Fix Hubble and Chandra?