Exposing the Roots of the Perpetual “STEM Crisis”

New book shows how the mythology behind the “crisis” developed, spread, and continue to thrive 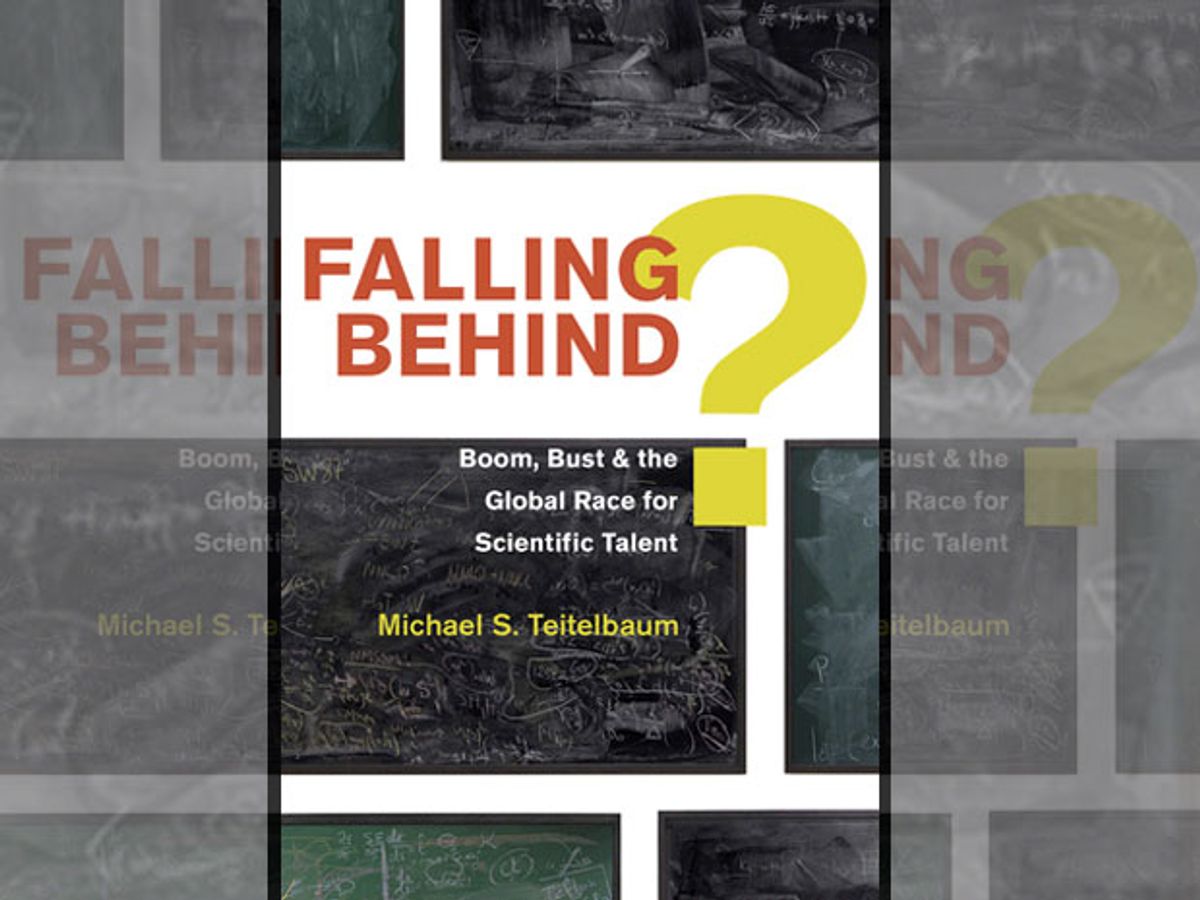 a. “It is pretty generally realized that our country faces a serious scientific and engineering manpower shortage. We have at present about half the engineers which we need, and each year we are graduating only about half our annual needs.”

b. “Science, technology, engineering and math form the foundation of the global economy. Yet, … if educational trends continue, fewer qualified candidates will be available to support growth in these areas.”

c. “We appear to be raising a generation of Americans, many of whom lack the understanding and the skills necessary to participate fully in the technological world in which they live and work.”

Well, for the record, the order of the year when each statement was made is 1957, 2014 and 1982.  However, as explained in Michael Teitelbaum’s new book, Falling Behind?: Boom, Bust & the Global Race For Scientific Talent  (Princeton University Press:2014), whatever order you chose is as good as any other. Teitelbaum is a Senior Research Associate in the Labor and Worklife Program at Harvard Law School (and whom I interviewed for my IEEE Spectrum feature, The STEM Crisis is a Myth). According to him, since the end of the Second World War there have been regular proclamations of shortfalls in the graduation rates of engineers and scientists, as well as prophecies of the imminent loss of U.S. technical leadership caused by the abysmal education of U.S. students in math and sciences.

Teitelbaum writes that these recurring concerns could well be cut and pasted into one sentence:

“The United States, long a leader in the number and quality of its scientists and engineers, has been falling behind its international competitors, and is thereby risking serious deterioration in its future prosperity and security.”

However, as Teitelbaum clearly demonstrates in his well-researched book, the past and current cries of an engineering and science crisis “are quite inconsistent with nearly all the available evidence,” going back to the early 1950s.

Teitelbaum begins Falling Behind? by examining the many hyperbolic claims of the current so-called science, technology, engineering, and mathematics (STEM) crisis. He expertly dissects these assertions and clearly demonstrates the weak assumptions and sloppy reasoning underlying each.

Teitelbaum next turns his attention to previous declarations of engineer and scientist shortages over the previous seventy years in a chapter aptly titled, “No Shortage of Shortages.” Teitelbaum has been debunking these claims since the 1980s. In Falling Behind?, he shows that the fear sown by the false alarms of impending doom did achieve their political goals of successfully spurring governmental actions to alleviate the supposed crisis by pouring more money into research and education. However, those crying wolf have also produced a series of (at least) five alarm boom-busts episodes that have predictably—if unintentionally—destabilized the U.S. science and engineering workforce. In addition, Teitelbaum argues, when the artificially created demand for engineers and scientist goes bust, it serves to discourage those very same sought-after students from pursuing engineering and science careers in the first place.

Teitelbaum's analysis shows that the basic problems in attracting students to science, technology, engineering, and mathematics are structural in origin, and “cannot be cured simply by providing additional resources.” He devotes a full chapter describing how the U.S. engineering and science “academic production process” operates, and how that process is insulated, especially at the graduate degree level, from the needs of the market. As Teitelbaum demonstrates, the current system of higher education has been geared for some time towards producing PhDs and postdoctoral students “irrespective of whether there is sufficient demand for such highly educated personnel in the market place.”

Especially useful is the light Teitelbaum shines on the many financial and political incentives that motivate industry, academia and government to proclaim an engineering and science crisis. He dedicates most of a chapter to, for example, exposing incessant lobbying efforts to increase the number H-1B visa workers to meet the supposed STEM shortage. Teitelbaum describes in detail the various lobbying organizations, interest groups and companies involved and how they are spending  tens, if not hundreds, of millions of dollars to change immigration policy.

Teitelbaum also distressingly, but accurately, points out how “advocates of these shortage claims have had a nearly open field in politics and the media,” and that while there have been decades of credible evidence debunking shortage claims, those making them are far less “organized, funded or politically connected” than those making those claims.  This disparity in resources, organization and political power make the fight for the truth, “really no contest.”

This was apparent in a recent “STEM Crisis Debate” sponsored by the Information Technology and Information Foundation (ITIF), a Washington, D.C. think tank. The ITIF insists there is a shortage of STEM students and workers, and is an advocate of increasing the number of H-1B visas. Robert Atkinson, ITIF president, for example, was quoted as saying, “If you don’t say there is a shortage, you don’t drive improvement.” That sort of admission (as do others) goes unnoticed in much of the press, as exemplified by the newspaper USA Today, which has been strongly beating the U.S. STEM crisis drum for quite some time.

Unfortunately, the outsized claims of a shortage in engineers and scientists will likely swamp Teitelbaum’s many sensible recommendations to start addressing the situation. One recommendation, for instance, is a call for the gathering of unbiased information on the STEM current and potential workforce. As he writes, “Given the importance of the health of the U.S. science and engineering enterprise and its talented workforce, it is striking that there continues to be no credible entity charged with regular, systematic, authoritative, and objective assessment of trends and prospects for education and careers in these occupations.” Until there is, one can confidently predict the past STEM alarm—boom—bust cycle to continue into the future unabated.

Another recommendation (or plea) Teitelbaum makes is for stability in government research and development funding. Past booms (and then busts) in funding have helped students and workers alike to pursue careers that just were, unsurprisingly, not sustainable. The recent boom and bust in the National Institutes of Health’s funding is one recent example Teitelbaum delves deeply into; the periodic increases and decreases in other government departments’ and agencies’ R&D provide fertile ground for others seeking examples.

Falling Behind? is a very useful addition to the science and engineering crisis literature, and fills in many of the areas not covered by Richard Freeman and Daniel Goroff’s Science and Engineering Careers in the United States (University of Chicago Press:2009) or Daniel Greenberg’s Science, Money and Politics: Political Triumph and Ethical Erosion (University of Chicago Press:2001). While the audience for Falling Behind? will tend towards the government and educational policy analyst crowd, the audience it deserves are the U.S. politicians and media editors and producers who are being bombarded daily with STEM crisis propaganda. Working scientists and engineers would also do well to give the book a read, though they may find it depressing.

However, while Falling Behind? is a comprehensive book about the origins of the science and engineering shortage mythology, it doesn’t tell the complete story. I think insufficient emphasis is given to how changes in market place demand have also contributed to the claims of science and engineering shortages. For instance, the petrochemical industry has been complaining of shortages of petrochemical engineering students for over a decade now. However, the industry’s leadership conveniently forgets about its previous massive and ruthless layoffs in the late 1980s and early 1990s that demolished the demand for petrochemical engineering students. Other industries that also like to moan about STEM shortages such as those in computing, aerospace and manufacturing, exhibit similar amnesia to their roles in creating them.

A number of years ago, the current Mayor of London Boris Johnson, then the Conservative Party spokesperson on higher education, bemoaned in the Guardian newspaper that Britain was failing to educate sufficient numbers of engineers and scientists such as nuclear physicists.

Sir John Rose, who recently retired as chief executive of Rolls-Royce, wrote a letter to Johnson about his article saying that, “If you don't have a nuclear industry, then anyone who is smart enough to be a nuclear physicist is not going to choose that career... People won’t become engineers just for the sake of it.”

Note: This post has been updated to reflect Michael Teitelbaum's current research affiliations.

Contributing Editor Robert N. Charette is an acknowledged international authority on information technology and systems risk management. A self-described “risk ecologist,” he is interested in the intersections of business, political, technological, and societal risks. Along with being editor for IEEE Spectrum’s Risk Factor blog, Charette is an award-winning author of multiple books and numerous articles on the subjects of risk management, project and program management, innovation, and entrepreneurship. A Life Senior Member of the IEEE, Charette was a recipient of the IEEE Computer Society’s Golden Core Award in 2008.